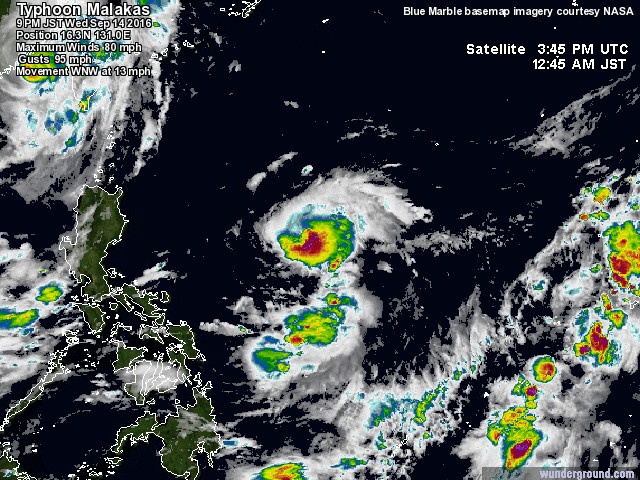 Cyclone brings flooding to central and southern parts of the country

Malakas made landfall on the island of Kyushu around 1400GMT on Monday. It struck as the equivalent of a Category 3 hurricane on the five point Saffir-Simpson scale. Sustained winds of up to 185 kilometres an hour were reported.

Interaction with the islands of Japan is now causing Malakas to weaken rapidly. Now downgraded to a tropical storm, Malakas is expected to be little more than a tropical depression soon after it exits Japan and disintegrates over the cool waters of the northern Pacific.

Yet we should not dismiss Malakas too quickly. Although maximum wind gusts will have dropped to 110km/h or less, by 1200GMT, the storm is expected to continue to drop huge amounts of rain right across Shikoku and Honshu.

The east coast of Kyushu seems to have experienced a remarkably intense period of rainfall. A 24-hour rainfall total of 578mm was reported at Nobeoka, and nearby Miyazaki recorded 310mm. The town of Takanabe saw 110mm fall in just one hour.

Malakas’s impact has already been considerable. Across six prefectures of western Japan, more than 600,000 people were advised to leave their homes.

More than 100 domestic flights were cancelled, and road and rail transportation was also disrupted.

Another 150mm to 250mm of rain is likely across a large part of Honshu on Tuesday. Saturated ground makes flooding highly likely, along with an elevated risk of landslides.