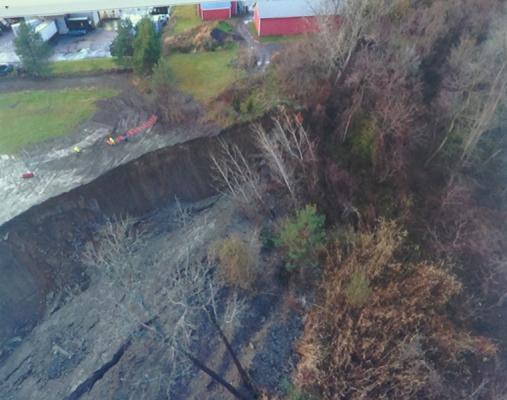 Contributed photoA shot of the landslide off of Bridge Street in Greenport behind the Sons & Daughters of Italy building.

GREENPORT, N.Y. (NEWS10) – A State of Emergency has been declared in Columbia County after a reported landslide is causing emergency conditions that could threaten public safety.

Around 2 p.m. Thursday behind the Sons and Daughters of Italy building, the earth gave way and blocked the Claverack Creek. As a result, the area where the landslide took place is unstable and unsafe.

Anthony owns a gym across the street.

“That’s crazy looking,” he said after seeing a picture of the landslide.

Multiple towns were put into a state of emergency. The sheriff said multiple local, county and state resources were sent to the scene.

A dam was being used to block the water. Early Friday morning, crews will begin work to direct the water in different directions.

No one was hurt, and Sheriff David Bartlett said he doesn’t believe anyone is at risk.

“If the water does overflow, it isn’t going to create a tidal wave going to downtown,” he said. “There is nobody in danger.”

Still, it was enough to get people nervous. Anthony said his parents have a house nearby. He doesn’t want to imagine what could have happened.

“That could definitely flood them out; that’s scary stuff,” he said.

This isn’t the first time a landslide has taken place in the area. In 2006, the same thing happened at almost the exact same location.

People are asked to avoid the area and allow emergency crews time to remove any hazards.

Bridge Street in the Town of Greenport is closed until further notice.

States of emergency were declared in three towns Thursday after a landslide tumbled into the Claverack Creek in the town of Greenport.

A state of emergency was put in place Thursday at 12:15 p.m. in Stockport, Greenport in the area of the Sons & Daughters of Italy on Bridge Street and in a flood zone area of Stottville at the junction of county Routes 25 and 22.

The state of emergency is in effect indefinitely, but will not exceed five days, or Tuesday, at 12:15 p.m.

Bridge Street in Greenport was closed and roadblocks were set up from Union Turnpike, or Route 66, to 85 Industrial Tract in Greenport as of 7:30 p.m. Thursday.

The emergency declarations were signed and put into effect by Columbia County Board of Supervisors Chairman Matt Murell and Greenport Town Supervisor Ed Nabozny.

During a press conference Thursday night at the Columbia County Sheriff’s Office, Sheriff David Bartlett said the section blocking the Claverack Creek is between 300 by 100 yards.

“I would like to emphasize there is no danger to the public downstream,” Bartlett said. “I don’t want people downstream to think, ‘My house is going to get washed away.’”

Columbia County and state crews are expected to start work Friday morning with the state Department of Environmental Conservation to reroute water from the creek to take pressure off the waterway, which has become blocked by debris from the landslide.

“That is the most feasible for the safety of the people and crews doing the work,” said William Black, Columbia County emergency management director.

Officials are concerned about impending weekend weather. Forecasters are calling for an additional half-inch to an inch of rain, Bartlett said.

“There is a great possibility more land will give way,” Black said. “...If someone goes out and stands on it [the bank] could give way. That is actually a big concern of ours. And, one of the first things we are going to do tomorrow is we’re going to grade that slip so that if anyone does go out there, they won’t get injured.

“We need the public to stay away,” Black added. “You don’t want people out there and we don’t need people to be at the bottom and now we have a rescue. We posted a sheriff’s patrol and light towers [at the Sons & Daughters of Italy]. We just want to keep everybody safe and away.”

The landslide was most likely caused by a continuation of the wet weather the county has experienced, Black said, adding the landslide is identical to a previous slide.

Greenport was placed under a similar state of emergency Feb. 3, 2006, after a massive landslide behind the area of the Sons and Daughters of Italy Lodge on Bridge Street.

Officials estimated the 2006 slide to be about 30 feet deep and 300 yards wide. After days of clearing the debris, the state of emergency was extended to the town of Stockport on Feb. 4 and was extended in both towns for an additional five days Feb. 9, 2006, as a precautionary measure while county emergency officials continued to monitor the slide’s after-effects.

The Sons and Daughters of Italy Lodge decided to stay in its Bridge Street location after the 2006 incident.