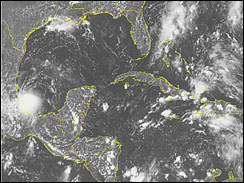 CBS/AP) The U.S. National Hurricane Center in Miami says Hurricane Lorenzo made landfall Friday along the east-central coast of Mexico, with the center of the storm, as of 2 a.m. EDT, just inland and about 40 miles south-southeast of Tuxpan. Lorenzo is moving west at about 8 miles per hour, with maximum sustained winds of 80 miles per hour, and is expected to continue in that direction as it sweeps inland. Rapid weakening is expected Friday morning as Lorenzo moves across eastern Mexico.
More....

MIAMI, Florida (CNN) -- Two tropical weather systems were rapidly losing steam Friday, but a third system was upgraded to a tropical depression, the National Hurricane Center said.
At 11 a.m. ET, a tropical depression that started the day as Hurricane Lorenzo had winds of 35 mph (55 kph) as it moved west across east-central Mexico. Lorenzo was forecast to drop 5 to 10 inches of rain, more in some locations, before dissipating on Saturday. The storm came ashore early Friday near Tuxpan, Mexico, as a Category 1 hurricane with maximum sustained winds of 80 mph (129 kph).

In the Atlantic, Tropical Storm Karen was barely hanging on with 40 mph (65 kph) winds, the hurricane center said. As of 11 a.m. ET, Karen's center was about 805 miles (1,295 kilometers) east of the Windward Islands. It was expected to continue to weaken over the next 24 hours, forecasters said.

Meanwhile, farther east in the Atlantic, a tropical depression formed about 210 miles (340 kilometers) southwest of the Cape Verde Islands. At 11 a.m., its maximum sustained winds were near 35 mph (55 kph) as it moved west at 7 mph (11 kph). Some strengthening is possible within the next 24 hours, forecasters said.