MIAMI (Reuters) - Tropical Storm Fay slowly weakened as it drenched Florida's east coast around the U.S. space shuttle fleet's home port of Cape Canaveral on Wednesday, and appeared less likely to reach hurricane strength than it had the day before.

The storm, which killed more than 50 people in the Caribbean before churning over Cuba, the Florida Keys and then reaching the Florida peninsula on Tuesday, was creeping north at 5 miles per hour (9 km per hour) near the Kennedy Space Center by 8 a.m. EDT.

Tropical storm Fay, which has battered the United States state of Florida, is believed to have sprung a lion and a bengal tiger form their cages at a private zoo in Palm Beach. In a statement, the Florida Fish and Wildlife Conservation Commission said the large cats were captured without incident.

"The adult tiger and lion escaped sometime late Tuesday or early Wednesday. Officers captured both animals by Wednesday morning and returned them to secure cages," it said.

The Commission says it is investigating how the big cats escaped from McCarthy's Wildlife Sanctuary in Palm Beach, 106 kilometres north of Miami, where they are kept along with five other tigers, five cougars, five leopards and other cats. Tropical storm Fay is believed to be the culprit, after it drenched central Florida with heavy rain and 100 kilometre per hour winds on Tuesday.

Fay has also left a trail of death and destruction in the Caribbean, where around 50 people are reported to have been killed. On Wednesday (local time) it was situated just north of the Kennedy Space Centre at Cape Canaveral, still kicking up a storm with 85 kilometre per hour winds.

Tropical Storm Fay lumbered offshore for what was likely to be a brief stay over the Atlantic Ocean's energizing waters after flooding hundreds of homes, trapping residents and leaving much of Florida a soggy mess. Forecasters expected the storm to complete its zig-zag course by hitting the state for a third time in a week, along with Georgia, but didn't think it would strengthen to a hurricane over the open waters.

The storm flooded hundreds of homes in Brevard and St. Lucie counties, some with up to 5 feet of water, forcing dozens of rescues. The Federal Emergency Management Agency was reviewing Gov. Charlie Crist's request for a federal emergency disaster declaration to defray rising debris and response costs.

A National Guard vehicle makes its way through the flooded streets in the Lamplighter Village neighborhood to help evacuate residents during Tropical Storm Fay in Melbourne, Fla.

Sandy Mavrelus, makes his way down a street after checking on his home in Lamplighter Village during Tropical Storm Fay in Melbourne, Fla., Wednesday, Aug. 20, 2008. The storm could dump 30 inches of rain in some areas of Florida and the National Hurricane Center said up to 22 inches had already fallen near Melbourne, just south of Cape Canaveral on the state's central Atlantic coast.

PORT ST. LUCIE, Fla. â€” Floridians were warned to beware of alligators in their flooded streets as Tropical Storm Fay poured more rain on the Sunshine State's central Atlantic coast, pushing creatures of all kinds from their homes.

Hundreds of human houses have been inundated in the torrential rains, trapping residents and leaving much of Florida a soggy mess. Fay stayed offshore Thursday.

Alligators, snakes and other wildlife were spotted in some flooded neighborhoods after high water drove the animals from their normal lairs.

"We have removed alligators, we have removed snakes and we've removed all kinds of wildlife," Brevard EOC Director Bob Lay told Local 6 News in Orlando. "Our animal services and enforcement officers have been doing this all over the county for the last three days." 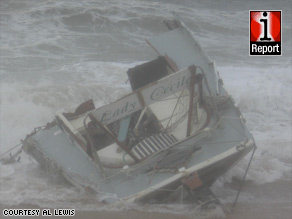 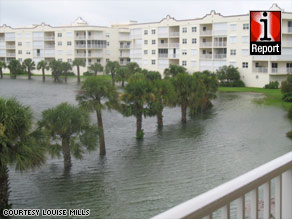 iReporter Louise Mills said floodwaters were almost in the garage of her Cape Canaveral, Florida, condominium.

The storm, which made its third landfall in four days on Florida's northeast coast Thursday, is expected to move near or over the Florida Panhandle coast Friday night and Saturday, according to the National Hurricane Center.

Authorities said the storm contributed to Thursday's drownings of two women: one swimming off Neptune Beach and another who was in water off Daytona Beach.

At 5 a.m. Friday, the National Hurricane Center said Fay was moving slowly westward across the state. The center was 65 miles east-northeast of Cedar Key, Florida, and moving westward at 6 mph.