Rescue workers rushed to help residents in flooded towns in southern Brazil after landslides and floods caused by heavy rain killed at least 45 people and forced 20,000 from their homes. The state of Santa Catarina declared a state of emergency as rescuers used helicopters and motorboats to help those left stranded by the floods after days of torrential rain.

Santa Catarina is facing its worst weather tragedy, state Governor Luis Henrique Silveira told reporters. Brazilian President Luiz Inacio Lula da Silva called Mr Silveira and told him the Federal Government stood ready to provide medicine and other supplies, the state said on its website. The State Government said the floods and mudslides had affected 1.5 million people, with 150,000 without electricity and four towns out of the 60 affected completely cut off by flood waters.

Brazilian newspapers showed photographs of streets submerged by the waist-high flood waters in the state, which is one of Brazil's wealthiest and known for its large number of descendants of German and Italian immigrants. Folha de Sao Paulo said at least one town was rationing water because of purification problems. Ten people died after being buried by landslides in the town of Blumenau, where town officials declared a state of emergency late on Sunday (local time). Seven more died in the town of Jaragua do Sul.

The big challenge on Monday will be supplying the shelters with medicines and food, Blumenau Mayor Joao Paulo Kleinubing said, according to the Civil Defence Agency's website. The first deaths were reported on Saturday after two days of heavy downpours. Forecasters said the rain was expected to ease in the coming days.

The Latin American country is in spring season when rains in the southern part of the country are at their heaviest, ending months of usually dry winter weather. 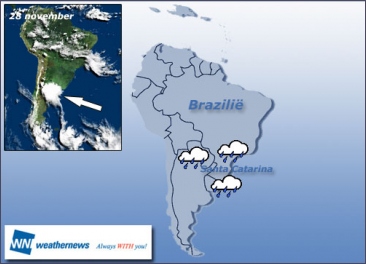