A 6.2-magnitude earthquake hit the Kepulauan Barat Daya region in Indonesia on Friday, according to the US Geological Survey. The quake, which occurred at 5:16 am (2016 GMT Thursday), was centred some 316 kilometres (196 miles) off Saumlaki in the Tanimbar Islands at a depth of 141 kilometres under the sea, a USGS statement said.

There were no immediate reports of casualties or damage and no tsunami warning was issued. The Indonesian archipelago sits on the Pacific Ring of Fire where continental plates meet, causing frequent seismic and volcanic activity.

A 7.7-magnitude earthquake in July 2006 off the south coast of the main island of Java killed more than 600 people. A series of dozens of powerful tremors hit Indonesia following 7.6 and 7.5 magnitude quakes that struck off the West Papua provincial capital Manokwari earlier this month.

Around 14,000 people flooded into camps on high ground in the aftermath of those quakes fearing deadly waves after authorities issued and then withdrew a tsunami alert. 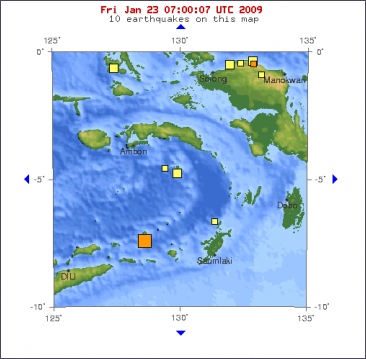