An earthquake measuring 6.3 on the Richter scale struck Monday evening off the northern tip of Indonesia's Sulawesi island, but there were no immediate reports of injury and damage, officials said. The quake at a depth of 35 kilometres near the Talaud islands between Sulawesi and the southern Philippines occurred at 9:16 pm (1416 GMT), the Indonesian Meteorology and Geophysics Agency said.

Officials said there were no immediate reports of injury or structural damage from the quake, another strong earthquake to hit the region in less than one month. A powerful 7.4-magnitude quake jolted the same area on February 12, injuring dozens of people and damaging hundreds of buildings. 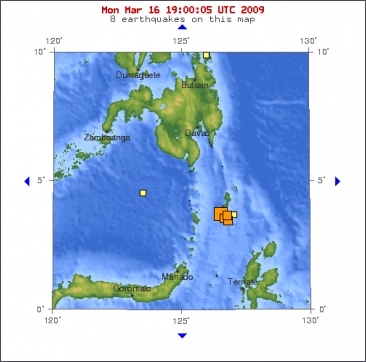