A SERIES of moderate earthquakes as strong as 5.9-magnitude have shaken the southern edge of the US state of Alaska off the coast of Kodiak Island.

The US Geological Survey reported the strongest quake struck at 6:22pm GMT (4.22am AEST) in the Gulf of Alaska about 98 km southeast of Kodiak, an island of about 14,000 people that serves as a popular eco-tourism destination. The temblor occurred at a depth of 12 km and about 560 km southwest of Alaska's largest city, Anchorage. Several quakes of magnitude 5.0 or higher rattled the region in the minutes and hours before the 5.9 quake.

There were no immediate reports of injuries or damage in the area from the "swarm" of more than two dozen earthquakes which occurred off Kodiak Island in recent days, an official at the USGS said. Earthquakes and volcanic activity are common in the area, which is part of the Ring of Fire, where the Pacific plate of the earth's crust meets other continental plates. 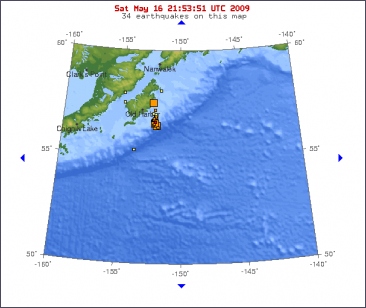