Overnight flooding has led to a landslide on a road in southern Scotland and the closure of some roads, including a section of the M74. Police in Dumfries and Galloway were forced to shut the A76 just north of Sanquar due to the landslide. The M74 is closed southbound at junction 11 - the Poneil interchange -and northbound near Crawford. Police said surface water was lying on many roads in the Stirling area and in East Ayrshire. 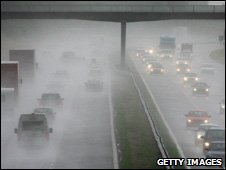 Central Scotland Police said that because of surface water on the A811, between Kippen and the Ballat Crossroads, the road has been closed in both directions and diversions put in place. The Met Office has issued severe weather warnings for heavy rain and high winds in Scotland. Gusts are expected to reach up to 75mph in the Northern Isles.

Cairngorm Mountain Ski Area, near Aviemore, said it hoped the slopes would be open after they were closed on Friday due to too much snow. After a two-day blizzard, the operators had to bring in huge caterpillar vehicles and snow blowers to try to clear the approach road and the slopes.