+ 0 Tweet
THE USGS confirms a 6.3 magnitude earthquake has shaken the Bering Sea between Alaska and Russia, 15 kilometres deep.

CNN is reporting two earthquakes occurred in the Bering Sea, according to the US Geological Survey. The first was magnitude 6.3 and the second was 6.0-magnitude.

No injuries or damages were immediately reported. The first quake struck at 11.11pm (GMT) at a depth of 15.1km. The epicenter was 474km from the US village of Gambell on St Lawrence Island, Alaska. The second quake happened five minutes later and had a similar depth, strking some 490km from Gambell.

No tsunami warning was issued for either quake and there were no injuries reported. 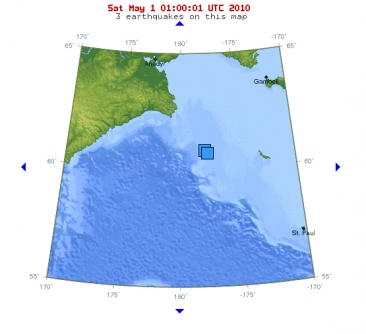