A magnitude-6.5 earthquake has hit deep below Brazil's Amazon region, but no damage or deaths have been reported. The U.S. Geological Survey says the temblor struck at 12:18 p.m. local time (1618 GMT) in Brazil's Acre state, which borders Peru and Bolivia. It was located 360 miles (580 kilometers) below the earth's surface.

An official in the mayor's office of Cruzeiro do Sul says nothing was felt there and no damage was reported in that city, 75 miles (125 kilometers) from the epicenter. The official spoke on condition of anonymity, as she was not authorized to speak with the media. 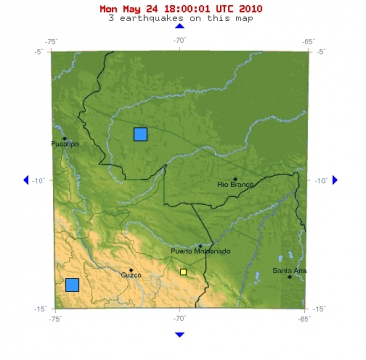