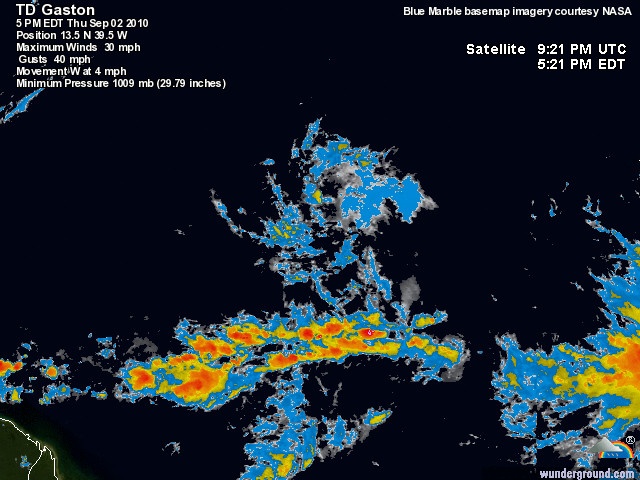 Tropical Storm Gaston could soon come swirling back to life over the central Atlantic Ocean, U.S. forecasters said on Saturday. The National Hurricane Center said Gaston, which weakened to a remnant low-pressure area on Thursday soon after becoming a tropical cyclone, had a high chance of redeveloping over the next 48 hours. If it re-forms, Gaston could grab the spotlight as the Atlantic storm season's new point of concern after Hurricane Earl's surprisingly tame brush with the U.S. East Coast this week. The Miami-based hurricane center was also monitoring a large area of disorganized showers and thunderstorms over the southwestern Gulf of Mexico. In an advisory issued at 2 p.m. EDT (1800 GMT), the center said some development of this system was possible if it remained over water and gave it a "medium chance" of becoming a tropical cyclone over the next 48 hours as it moved northwestward at up to 5-10 miles per hour.

Gaston was churning west across the mid-Atlantic on Saturday, on a path toward the Caribbean Sea where it could threaten the Lesser Antilles by sometime late next week, forecasters said. They said it was too soon to tell whether it could also threaten energy interests in the U.S. Gulf of Mexico, however. Energy traders keep a close eye on potentially violent storms approaching the Gulf because it is home to about 30 percent of U.S. oil production, 11 percent of natural gas production and more than 43 percent of U.S. refinery capacity. The hurricane season runs from June 1 through November 30. In its Saturday advisories, the hurricane center said it was also watching a low pressure system located between the west coast of Africa and the Cape Verde islands. There was only a low chance of development of the system over the next two days.