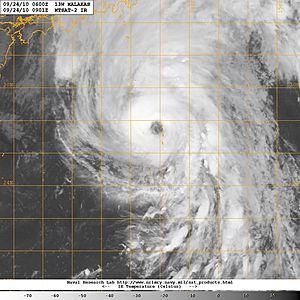 + 0 Tweet
Towering thunderstorms and heavy rainfall are two things that NASA's CloudSat satellite saw as it passed over Typhoon Malakas, and those two factors confirm a strong storm. NASA's CloudSat satellite's Cloud Profiling Radar can basically slice a tropical cyclone in half and take a look at its clouds and rainfall, and that's what it did when it passed over Typhoon Malakas on Sept. 23.

CloudSat flew over Typhoon Malakas during the daytime on Sept. 23. At that time, Malakas had a minimum central pressure of 965 millibars, maximum winds of around 115 mph (100 knots), and a storm width (winds greater than or equal to 57 mph or 50 knots) of around 150 nautical miles.

Dr. Matt Rogers, a research scientist who works on the CloudSat team at the Dept. of Atmospheric Science, Colorado State University, Fort Collins, Colo. noted that the " CloudSat overpass of the typhoon occurred around 4:09 GMT (12:09 a.m. EDT/1:09 p.m. local time/Japan), and radar imagery of the typhoon indicated strong convection on either side of the storm eyewall, with maximum cloud top heights around 9.3 miles (15 kilometers) in the southern quadrant of the storm, and approaching 10 miles (16 km) in the northern quadrant."

A strong convective (rapidly rising air that creates the thunderstorms that power a tropical cyclone) cell dominates the northern quadrant of the storm, while several smaller convective cells combine to make up the southern quadrant, according to the CloudSat overpass.

"The presence of heavy rainfall near the storm core causes radar attenuation - a condition that occurs when the vast amount of water present in the storm scatters or absorbs all available radar energy, leaving no signal to return to the satellite," Rogers said.

Satellite data also detected an eye 50 nautical miles wide, and around it were the strong thunderstorms wrapping around it and into the storm's center from the southeastern quadrant.

Malakas has tracked over Iwo To and Chi Chi Jima and is now headed into open waters this weekend. It is forecast to stay at sea and away from land, paralleling the coast of Japan. By Saturday, Malakas is forecast to start transitioning into an extra-tropical storm and weaken gradually. As it continues northeast it will encounter stronger vertical westerly wind shear which will help weaken the system somewhat, but it is forecast to still remain an intense storm after the transition.