Eight of the dead were in Enterprise. Several people also have been injured and several are missing.

Students at Enterprise High School were taking cover in the hallways when the twister hit the building.

"We were sitting there in the halls. All of a sudden, I look out the window, the wind started to pick up and the roof starts to come off and the whole building collapsed on everybody," said Chase Baldwin, a student at Enterprise high school.

"A bunch of people were trapped under cinder blocks and stuff, and people had their heads cut open."

The high school was heavily damaged, said Laren Allgood, a reporter for the Enterprise Ledger.

"It looked like a bomb dropped on the high school," she said. "All the school buses are demolished."

About eight students were trapped in the debris, she said. "They just got one out. Kids are walking around dazed, cut."

Another witness said that a girl was pinned from the waist down when a wall fell on her; another girl was unconscious.

She said alarms alerted the town's 20,000 residents before the tornado hit. "We knew to take cover."

The remains of a barn, destroyed by an apparent overnight tornado in Missouri.

Weather officials told CNN that at least one person was dead in Wilcox County, where a number of homes were destroyed.

"We've seen lacerations, we've seen folks with tightness in their chest from the anxiety," she told CNN.

The hospital incurred "peripheral damage," she said. Windows were broken and ceiling tiles were damaged.

Windows in surrounding buildings were "blown out" and the hospital was running on emergency power, Kaminski said. "There are trees down on roads all around us."

"There are a lot of cars upside down," said John Dean, who lives near the school, where ambulances were lined up. "None of the cars have windows in them. The streets around the school -- the same situation. A lot of roofs missing. Everybody's car windows were blown out. It's pretty bad."

Resident Tara McGrath said she weathered the storm inside an industrial-size refrigerator at her work place and left it afterward in time to see two twisters headed out of town.

"It was very frightening," she told CNN. "I'm shaky still from it."

"I heard rumbling," said Walt Thornton, who works at the Enterprise Municipal Airport. "I looked up to the southwest and saw -- to me it was a very, a huge tornado going on in the valley behind some of our hangars."

He estimated the funnel cloud was "probably a quarter mile from me," but he said it did not hit the airport.

Tim Greathouse, a reporter for the Ledger, said he saw "a lot of structural damage" after the storm passed through the town.

A roof at the elementary school "has been ripped," he said. "Shingles scattered all over."

Power lines were down and the utility crews were out "in full force," he said.

Larry Walker with Coffee County's Office of Emergency Management, said residents are "up to their eyeballs" trying to assess damage.

A tornado was also reported in nearby Abbeville, in Henry County, Alabama, a spokesman for the Abbeville Police Department said.

"We had one residence that was struck, no reports of injuries," said public information officer Chad Sowell. About half a mile away, 10 miles west of Abbeville, an 18-wheeler was overturned on State Highway 10 and the driver was trapped, he said.

"They're quite concerned," Davis said. "We're staffing up for a long night tonight. Other than that, there's not a whole lot you can do."

Severe weather is predicted from Illinois to Florida, and residents are being warned to watch for tornadoes and thunderstorms.

5:51 pm AL:
AP reports at least 13 have been killed by apparent tornadoes in Alabama.

ENTERPRISE, Alabama (CNN) -- Six more tornado-related deaths were reported in Georgia early Friday, bringing to 17 the number of fatalities blamed on a storm system that blasted the central and southeastern United States.

The storms killed nine people in Georgia, seven in Alabama and one in Missouri.

Details of the six newly reported fatalities in Georgia early Friday were not immediately available.

At least two people were killed when a tornado slammed into a hospital in the south Georgia town of Americus on Thursday evening, according to a Georgia Emergency Management Agency spokesman.

A third person was killed and four were hurt when a tornado touched down in rural Taylor County near the southwest Georgia city of Albany, the spokesman said.

The city of Americus lost its fleet of ambulances when the tornado hit at the Sumter Regional Medical Center just before 10 p.m. ET, said Buzz Weiss of the Georgia Emergency Management Agency. Ambulances from Albany, about 35 miles away, were sent to Americus to help, Weiss said. It was not immediately known if those killed in Americus were patients at the hospital, he said.

Sumter County Sheriff Pete Smith said at least seven people were critically injured. In all, 50 patients were evacuated from the hospital to other medical facilities in nearby towns, he said.

One of the buildings destroyed in Americus was the local headquarters of the American Red Cross. A Red Cross official said the relief group also lost three disaster trailers, lights and generators that would have been used to respond to the disaster.

It was presumed that the other six Georgia fatalities occurred in the Americus-Albany area.

Residents gather near a house that had a truck thrown into it by the tornado in Enterprise.

Students at Enterprise High School were taking cover when it was hit.
>> Watch scenes of destruction <<

"The whole building just collapsed on everybody," said Chase Baldwin, a student at the school. "A bunch of people were trapped under cinder blocks, and people had their heads cut open."

There was one other death in Enterprise and one fatality in Wilcox County, where a number of homes were destroyed, Richardson said.

"[There are] vehicles flipped over, houses gone. This huge brick and steel building [was] torn apart by the power of the storm," McIntrye said.

"You can see the grief on the faces of the people who come here," he added. "I saw one student walking away, being comforted by another student."

Laren Allgood, a reporter for the Enterprise Ledger, said the sprawling high school "looked like a bomb dropped on [it.] All the school buses are demolished."

Allgood said alarms alerted the town's 20,000 residents before the tornado hit. "We knew to take cover."

The National Weather Service reported a swath of damage about 200 yards wide in Enterprise.

"I heard rumbling," said Walt Thornton, who works at the Enterprise Municipal Airport. "I looked up to the southwest and saw ... a huge tornado going on in the valley behind some of our hangars."

A tornado was also reported in nearby Abbeville, in Henry County, Alabama, a spokesman for the Abbeville Police Department said. There were no reports of injuries.

Alabama Gov. Bob Riley ordered the state's National Guard to send a contingent of 140 troops, including medics, MPs and roving security patrols, from Mobile to Enterprise. Their primary mission is security.

The National Guard has three CH-47 Chinook cargo helicopters, as well as an engineering unit on standby if needed for search and rescue or debris removal.

In addition, at least two UH-1 "Huey" medevac helicopters were sent from nearby Fort Rucker to the high school.

Riley also declared a state of emergency in the area.

President Bush was briefed on the storm while in New Orleans Thursday afternoon and again when he boarded Air Force One for the return flight to Washington. He telephoned Riley and Missouri Gov. Matt Blunt en route.

"The president is deeply saddened to hear of the loss of life," said White House spokesman Scott Stanzel. "He is thinking about the families of the victims and the citizens of the states, and the administration stands ready to help."


One death in Missouri blamed on system

A battered truck rests against a broken tree after a tornado touched down early Thursday near Caulfield, Missouri.
Earlier Thursday, a suspected tornado touched down at least twice in southern Missouri, leaving one person dead and four injured, according to Susie Stonner of the Missouri State Emergency Management Agency.

Dennis Crider, a journalist for the West Plains Quill, told CNN the fatality was a 7-year-old girl in the small community of Caulfield. Three of the injured were her father, mother and a brother, Crider quoted the Howell County sheriff as saying.

A gas station in Caulfield, about 15 miles west of West Plains, was destroyed by the storm, according to the assistant manager of a neighboring station.

"It's like a war zone down there," said Delora Murta.

[img width=480 height=292]http://www.cnn.com/interactive/weather/0703/gallery.missouri.tornadoes/gal.04.tornado.ap.jpg[/img]
Don Dixon, left, and Kayla Jarvis sort through debris at a destroyed gas station in Caulfield, Missouri. The storm swept through around dawn, killing a seven-year-old child.

[img width=480 height=292]http://www.cnn.com/interactive/weather/0703/gallery.missouri.tornadoes/gal.06.tornado.ap.jpg[/img]
Just east of Caulfield, Kermit Collins, left, walks among debris from his cousinâ€™s mobile home which was destroyed by the storm.

"We had a spotter who watched [the tornado] form and dissipate in 10 minutes," said West Plains Emergency Management Coordinator Kent Edge.

The storm system hit northern Arkansas Thursday morning. Hail covered the ground, but there was no damage and officials do not believe a tornado touched down.

On the north side of the storm, blizzard-like conditions and heavy snow were hitting the states in the path of the system.

[img width=213 height=320]http://www.cbsnews.com/images/2007/03/02/image2530127.jpg[/img]
A friend helps a woman and her husband, not seen, look for documents in the remains of the couple's home in Enterprise, Ala., on Thursday March 1, 2007. The woman and her husband were in the home when an apparent tornado hit and he pushed her into the bathroom and lay on top of her until the storm passed.  (Photo: AP Photo)

(AP) In the chaos after a tornado killed nine people in Enterprise, emergency workers had trouble talking to one another because they tried to use their cell phones instead of the state's $18 million emergency communications upgrade, officials say.

"People were frustrated, but all they had to do was turn on their radios," state Homeland Security Director Jim Walker told The Associated Press in a recent interview. 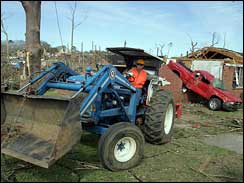 C.C. Martin uses a tractor to remove a pickup truck from a house damaged by Thursday's tornado in Enterprise, Ala., March 4, 2007.  (AP)

Most police, firefighters and other emergency responders in Coffee County use Southern LINC Wireless phones and walkie-talkies for day-to-day communications.

But after the tornado struck on March 1, traffic on that system more than tripled "instantaneously," said Southern LINC's manager of radio frequency and construction, Clay Brogdon.

"It overwhelmed our network," Brogdon said.

"Because of our reliance on it, if it goes down you're in a quandary," Larry Walker said.

He said emergency workers eventually switched from cell phones to radios "and that system worked fine." 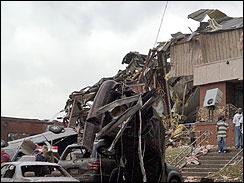 The problems in Enterprise show how dependent society has become on cell phones, said Rosanna Guadagno, a social psychology professor at the University of Alabama.

"Humans tend to be creatures of habit and our habit these days is the cell phone. It's disabling when technology we have come to rely on is not available to us," Guadagno said.

For years, law enforcement agencies in Alabama struggled with different radio systems that often would not allow officers in one city to talk to police in the next town or even to their own fire department.

In an effort to fix that problem, the Alabama Department of Homeland Security used $18 million from a federal grant in 2004 to buy equipment that would bridge the gaps between various radio systems.

Brogdon said the Southern LINC cell phone tower in the area stayed in service throughout the emergency and Enterprise never completely lost service. He said many callers were unable to get through because so many people were trying to use the system.