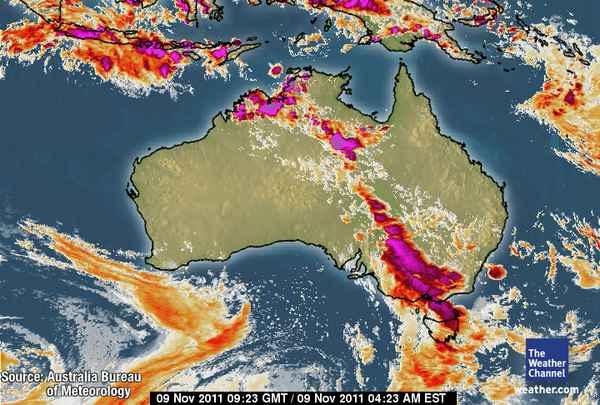 + 0 Tweet
Dit is Victoria/Melbourne op 9 november
QUOTE
Freakstorm and Golfball Hail lashes Victoria (Australia)
VICTORIA'S State Emergency Service has responded to more than 1000 calls for help overnight after one of the wildest storms to lash the state this year.

In one of the worst-hit areas, Frankston received 30 millimetres of rain in 20 minutes yesterday. Residents made more than 200 calls for help, including 150 about flooding and 40 about building damage.

In Croydon several people had to be rescued from their vehicles after they became stuck in flood waters.

There were another 150 reports of fallen trees, many in towns northwest of Melbourne including Castlemaine, Woodend and Maryborough.

The northeast endured the worst of the storm, where 65mm of rain fell - the highest rainfall for the state. In Wodonga, several houses had their roofs ripped off. There were also reports of flooded backyards and falling trees.

Bureau of Meteorology senior forecaster James Taylor said at Oakleigh, in Melbourne's southeast, 12 to 14mm of rain and hail fell in just 10 minutes.

He said hail the size of golf balls hit Ballarat at the height of the storm.

"We also had a water spout reported off Black Rock (in Melbourne's bayside)," Mr Taylor said.