Tornado's blijven slachtoffers maken in VS 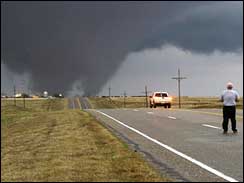 (CBS/AP) A tornado as wide as two football fields carved a devastating path through an eastern Colorado town as a massive spring storm swept from the Rockies into the Plains, killing at least four people in three states, authorities said Thursday.

One twister killed an Oklahoma couple as it blew their home to pieces. Another woman died after the Colorado tornado hit, and a Texas man was found dead in the tangled debris of his trailer.

Winter storm warnings were still posted for most of Wyoming, where heavy snow was blamed for interstate pileups, forecasters said. In central Wyoming's Wind River Mountains, 58 inches of snow from the storm was recorded by Thursday morning.

Some of the worst devastation was in Holly, Colo., where a tornado up to 600 feet wide touched down Wednesday, damaging homes and seriously injuring at least 11 people, authorities said. At least 60 homes were damaged, and five were completely destroyed. "The small town of Holly, Colorado, is literally torn to pieces," said Lauri Martin of CBS affiliate KKTV, standing amid the debris.

"Homes were there, and now they're gone," Prowers County Administrator Linda Fairbairn said. "Many, if not all, the structures in town suffered some degree of damage."

Rosemary Puga, 28, whose home Holly-area home was hit, died after being airlifted to a Colorado Springs hospital. She and her 3-year-old daughter had been thrown into one tree, her husband Gustavo was found in another.

"I could hear somebody hollering for help ... There was a little girl and her mother up in the tree, wedged up in a tree," said Holly resident Russell Grogan.

The child is hospitalized with a skull fracture. She is expected to recover.

The thousand people who live in Holly don't have any electricity or any gas, but they do have running water, Martin said on CBS News' The Early Show.

Holly is located about 20 miles east of Lamar near the Kansas border.

The Colorado tornadoes also killed dozens of cattle and injured others so severely they will have to be shot, rancher Bill Lowe said. "It's better than letting them suffer," he said.

Just three months earlier, back-to-back blizzards and subzero temperatures killed about more than 10,000 of the livestock on farms across Holly's southeastern corner of the state.

Near Elmwood, Okla., Vance and Barbra Woodbury were killed when the storm blew apart their home, said Dixie Parker, Beaver County's emergency management director. Their bodies were found about 75 feet from the obliterated structure.

"We set off the tornado sirens, but they live too far out to hear them," Parker said. "The house was just flattened, the out buildings are gone. All that's left is debris."

The Texas Panhandle was hit with baseball-sized hail, rain and tornadoes that uprooted trees, overturned trucks and injured at least three people. Monte Ford, 53, was killed near Amarillo when he was thrown about 15 feet from his oilfield trailer, which was rolled by the wind, Department of Public Safety spokesman Dan Hawthorne said.

In Holly, a town of about 1,000 residents 235 miles southeast of Denver, the storm tore the back off Cheryl Roup's home and flipped it into her front yard, the Denver Post reported. Somehow, her China closet survived the damaged, and her border collie, Lacy, escaped harm.

"Lacy managed to crawl out from under the rubble, but she seemed OK," Roup told the Post. "She's a little shocked, much like I am right now."

Soon after that crash, another pileup started nearby involving several passenger vehicles and seven big rigs, two of which were hauling diesel fuel. One of the diesel haulers rolled over, and authorities said the other leaked around 1,000 gallons of fuel. No one on the bus was hurt, but four other people were taken to a hospital, Wyoming Highway Patrol spokesman Sgt. Stephen Townsend said.

The wintry weather closed a 250-mile stretch of Interstate 80 in southern Wyoming. Large parts of Interstate 25 and more than 80 miles of I-90 were also closed.

+ 0 Tweet
A damaging tornado touched down today in Northwest Oklahoma City and continued to Piedmont, OK, several miles to the north.  Based on the damage seen on local news, the tornado appeared to be rather strong.  Two people have been reported injured as of 5:30 pm.  The radar image at the time of the tornado is shown below:

Shown below is an image of a rolled semi-truck trailer in NW OKC, along with extensive tree damage.  Based on first-hand reports, and the radar image above, the tornado was most likely rain-wrapped and concealed from view.  TornadoVideos.net storm chasers are currently monitoring intense convection that is heading towards southern OK.  We may head south very soon if these storms hold together.