Officials hope to put out the fire near the Griffith Park Observatory on Wednesday.

The spreading flames prompted mandatory evacuations Tuesday in the Los Feliz neighborhood on the south side of the park, according to the Los Angeles Fire Department.

A shelter was set up at nearby Marshall High School. (Watch flames force firefighters to take refuge Video)

The fire "laid down" overnight, and firefighters hoped to be able to extinguish it on Wednesday, Fire Chief Douglas Barry told reporters. No homes were in immediate danger from the flames.

"We will be working well into the night to make sure we get this fire controlled and get a containment line around it," Deputy Fire Chief Mario Ruda told reporters.

An estimated 200 firefighters battled the flames, and eight helicopters were used at the height of the blaze.

Arson investigators were questioning a person of interest in connection with the blaze, Barry said. The man was being treated for burns.

Officials were probing whether the blaze started after a person discarded a cigarette at a golf course in the park, a law enforcement official familiar with the investigation told The Associated Press on condition of anonymity.

Los Angeles Mayor Antonio Villaraigosa said there are no facts indicating the fire was caused by arson, adding that "it could have been an accident."

Barry said hot, dry conditions and the steep terrain of the park were hampering firefighters' efforts to control it. Swirling winds were also presenting a problem, he said. 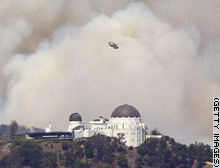 "This fire has danced around like nothing I've ever seen," Los Angeles City Council Member Tom LaBonge told reporters, adding that the fire had destroyed a terraced garden known as Dante's View.

The park is in the Hollywood Hills, about 10 miles north of downtown Los Angeles. It includes golf courses, tennis courts, the city's zoo and botanical gardens and the copper-domed Griffith Park Observatory.

The bright orange glow of the fire provided a striking backdrop for the white facade of the observatory into the evening hours.

Visitors and nonessential workers were ordered to leave the zoo when the fire broke out, but none of the facility's animals were being evacuated, spokesman Jason Jacobs told CNN.

The picturesque park has been used as a location for numerous television shows and films, including 1955's "Rebel Without a Cause" and 1985's "Back to the Future."

[img width=221 height=320]http://www.reuters.com/resources/r/?m=02&d=20070509&t=2&i=768192&w=[/img]
Los Angeles City firefighters prepare to make a stand near the Greek Theatre after a brush fire fed by high winds, low humidity and unseasonably hot weather in Griffith Park flared up and changed directions after being partially contained in Los Angeles May 8, 2007. REUTERS/Gus Ruelas

[img width=199 height=320]http://www.reuters.com/resources/r/?m=02&d=20070509&t=2&i=769097&w=[/img]
Firefighters evacuated 300 residents of an affluent Los Angeles neighborhood and pushed back flames from the edge of upscale homes as a wildfire in the city's largest park flared on Tuesday night. The blaze in Griffith Park, which authorities say might have been started by a careless cigarette smoker, began in the early afternoon and was fanned by unseasonably high temperatures and hot Santa Ana winds through the brittle, rain-thirsty brush. REUTERS/Graphics

Inmates from the Georgia Department of Corrections use rakes last week to extinguish the remains of a fire in Waycross.

(CNN) -- Two boys have been arrested in connection with three Georgia wildfires, part of a string of blazes that have scorched more than 100,000 acres in southern Georgia in the past month, authorities said Thursday.

The boys, ages 12 and 16, have been charged with criminal damage to property and released to their parents' custody.

The arrests came after a bloodhound used by the Georgia Forestry Commission's arson task force followed a footprint from the start point of one fire and found a spot where teenagers hang out, according to Darryl Jones, a member of the task force.

"We followed the evidence and got to a juvenile who confessed," he said on CNN's "Newsroom."

The fires that investigators say are connected to the two boys have been contained, The Associated Press reported.

More than 1,000 wildfires have been reported in 21 Georgia counties in the past month, Jones said. One fire has crossed into Florida.

Jones said the boys were charged in connection with three of the fires.

Meanwhile, residents of the small town of Moniac, Georgia, about 25 miles west of Jacksonville, Florida, were out of their homes after being ordered to leave Wednesday as the Bugaboo Scrub Fire on the southeastern edge of the Okefenokee Swamp burned closer.

Officials said the order affected about 1,000 people, according to Kris Eriksen, manager of the joint information center on the southeast Georgia fires.

The Bugaboo Scrub Fire, which has consumed 68,650 acres since it began Saturday with a lightning strike about 16 miles west of Folkston, Georgia, is threatening the town of Fargo, about 45 miles east of Valdosta.

"The added concern today is the shifting winds" from Subtropical Storm Andrea, now downgraded to a subtropical depression, off the Florida coast, Eriksen said.

"We'll move resources as we have to," she added.

The sprawling Sweat Farm Road-Big Turnaround Fire, south of Waycross, Georgia, has devoured 116,482 acres so far in Ware and Charlton counties, according to the Georgia Forestry Commission Web site.

The blaze began April 16 after a power line went down and sparked dry brush.

On Wednesday, authorities in Charlton County issued a mandatory evacuation order for the Davis community, a group of about 20 houses, because the flames were creeping closer to them.

The fire also has forced the closure of the Okefenokee Nature and Wildlife Reserve as well as parts of U.S. Highway 1 and state Route 177, an incident report said.

In the same region, the Kneeknocker/Race Track/Fort Mudge/Brown Town/Easter Day fires have burned more than 3,200 acres in Brantley and Ware counties, the Roundabout Swamp Fire has scorched 5,857 acres in Atkinson County and the Floyds Island Prairie Fire has consumed 1,231 acres in Ware County.

More than 1,000 personnel are battling the Georgia blazes, many of which erupted during drought conditions.

Southeast Georgia and northeast Florida are suffering from extreme drought conditions, according to the National Oceanic and Atmospheric Administration.

The region has received less than 8.5 inches of rain since the beginning of the year, the Georgia Automated Environmental Monitoring Network said on its Web site.

"The water table is very low in the Okefenokee Swamp," Eriksen said. "The little bits of rain we've been getting haven't helped."

"You combine all the dead and down fuel [dry brush] with what would be your green fuel to slow it, and that's also drought-stressed, and the combo isn't going to slow a fire down, you're going to have a bigger fire," Eriksen said.

Gov. Charlie Crist, who declared a state of emergency May 3 because of the drought and wildfire danger, deployed the National Guard to help contain the blazes.

Fires are burning in 54 of Florida's 67 counties.