- Stapleford Railway op twitter:
BREAKING NEWS #Tornadoes in Loughborough!!!! Building and trees damaged!!! Full updates to follow
- Being comfirmed by radar supercell moving north from nw leics 2 ton skips reported blown over in merryleas and buildings lost roofs #tornado
- major damage to industrial buildings being reported in nw leics coalville and loughborough by suspected tornado and flooding
- Hailstones size of golfballs falling north leicester major storm lightening
- Appeals being made to put any hail stones over 1 inch in freezer for experts to analyse also any pics of the tornado


Gepubliceerd op 28 jun 2012 door sourcedesignleics
The view out of the Source Design window on Lower Bond Street, Hinckley during the great hail storm of 28 June 2012!


Gepubliceerd op 28 jun 2012 door rjm08
Extreme hail storm hits Hinckley. It lasted around 15 minutes and a number of car windscreens where smashed else roofs dented. Staff at National Grid had never witnessed weather as extreme as this before.

+ 0 Tweet
Cliff Thomas ‏@WarehamWeather
#Tornado reports in #Hinckley #Loughborough #Coven and #NewtownLinford Likely to be more by end of the day. 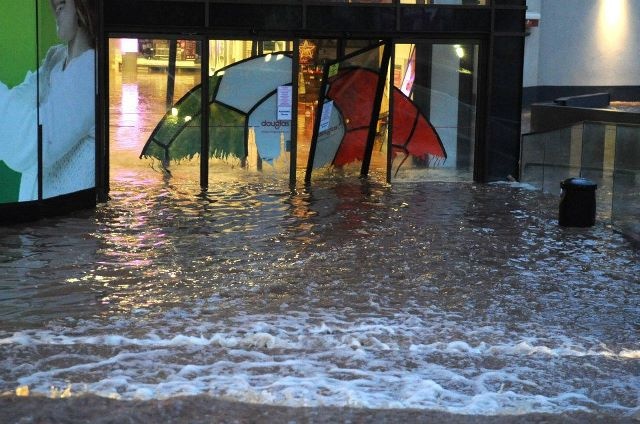 barrabest : Cork too badly affect by the floods. This shopping centre's doors caved in 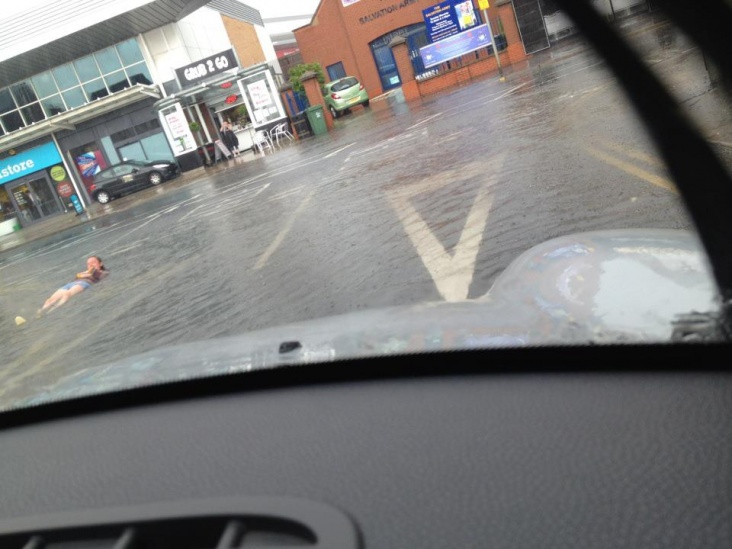 Alpha Juliet:1 hour of rain in #Loughborough and this happens...

SYNOPSIS (voor de liefhebbers)
Plume of high theta-w air has advected across much of Britain overnight with a large upper trough approaching from the west. At the surface, a cold front will move north-eastwards through the day.

Diffluent upper flow ahead of the trough is bringing forcing for ascent across portions of Wales already, and a number of thunderstorms have developed. At this stage they are likely marginally elevated above a coolish boundary layer, but strong cloud-layer shear suggests large hail to 20-30mm is possible with this early activity, with elevated supercells possible, with clusters of storms are likely. Gusty winds also possible.

This activity is expected to continue to move NNE and NE through this morning. Although there is a fair amount of mid-level cloud associated with the widespread large-scale ascent ahead of the trough, enough diurnal heating of the boundary layer is expected to allow storms to become surface based as the cluster of storms moves through the Midlands into N England, and later, Scotland. With 30-40 knots of deep layer shear, well-organised multicells and embedded supercell structures are likely. 20-30mm diameter hail and gusts to 60mph are possible. In addition, isolated tornadoes are possible.

In the wake of this activity, and across the more south-eastern parts of the WATCH area, further thunderstorms are expected to develop and the move north-east, although these will be more isolated with south-eastern extent. Modified ascents for afternoon temperatures suggest around 1200-1800 J/Kg of SBCAPE. WIth 0-6km shear remaining around 40 knots, and perhaps increasing a little, well-organised multicells and isolated supercells seem possible. With 0-1km SREH of ~150 J/Kg and fairly low LCLS, a few tornadoes may develop with this activity. Indeed, should an isolated supercell develop in an area with decent surface heating, a strong tornado cannot be ruled out. Hail to 60-70mm or so and wind gusts to 65mph possible with supercells too; otherwise, 20-30mm hail and 55mph gusts. If this activity can develop into northern parts of England too, it may tend more towards a squall line, with an associated wind threat.

The activity will end from the south-west through the afternoon and evening as the cold front moves in.

Gepubliceerd op 28 jun 2012 door thethisisnetwork
David Watts, of the Faculty of Technology, at De Montfort University, was at work when lightning struck during a storm in Leicester on June 29, 2012. He said: "I swear it was way more intense but I suppose the camera never lies. You can hear sparks in the office just before the main bolt hits."


Gepubliceerd op 28 jun 2012 door thethisisnetwork
Neil Booton, of Melton Mowbray, took this video of the storm pelting his car, and has counted up to seven dents in the body work. He said: "The noise was immense."
The storm hit parts of Leicestershire on Thursday, June 28, 2012 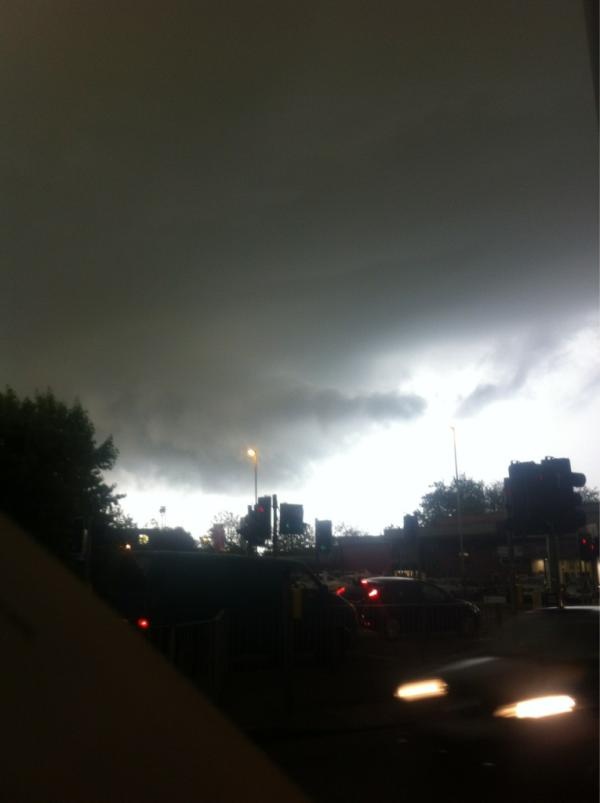 Laura Hatherly-thomp: My camera was to slow to see the tornado but it was just lifting as I took this picture ) love it!!! 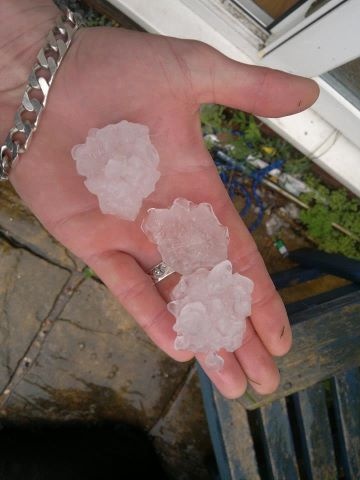 mattmoo2: The size of the hail that just fell in Leiecester, you gotta see this 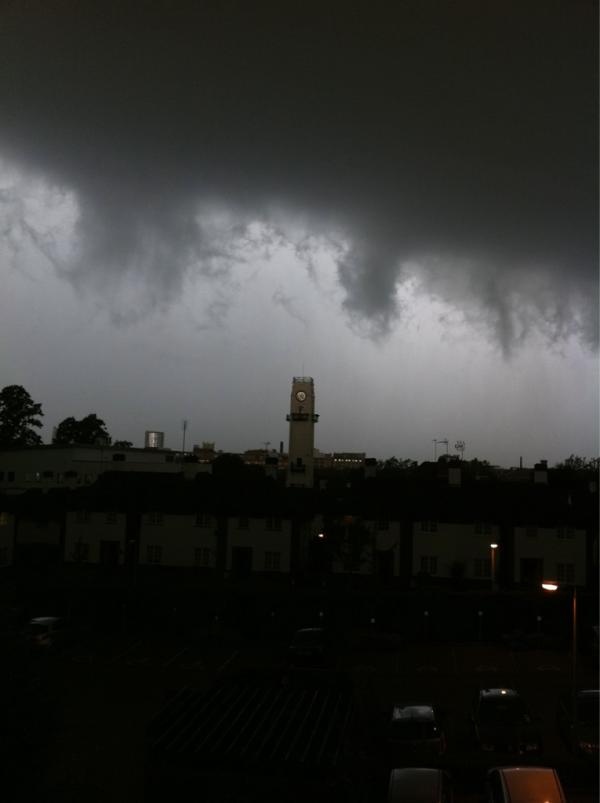 lucystevens1982: Arghhh thunder and lightning and a massive down pour of rain 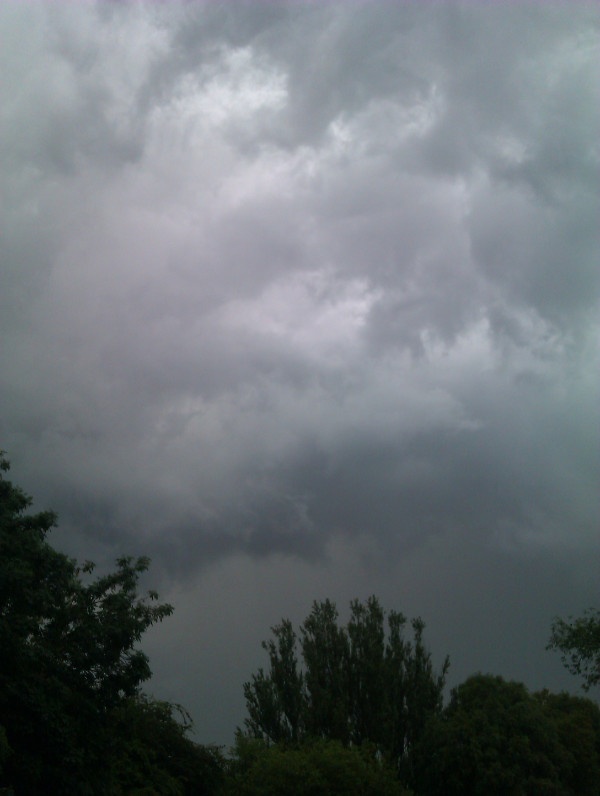 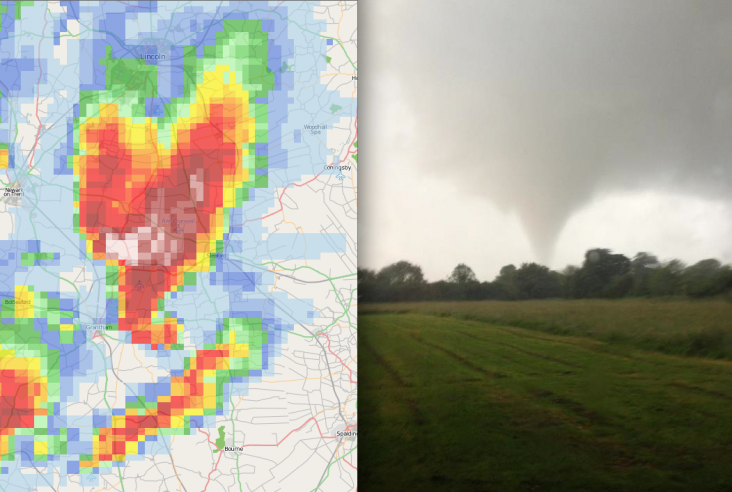