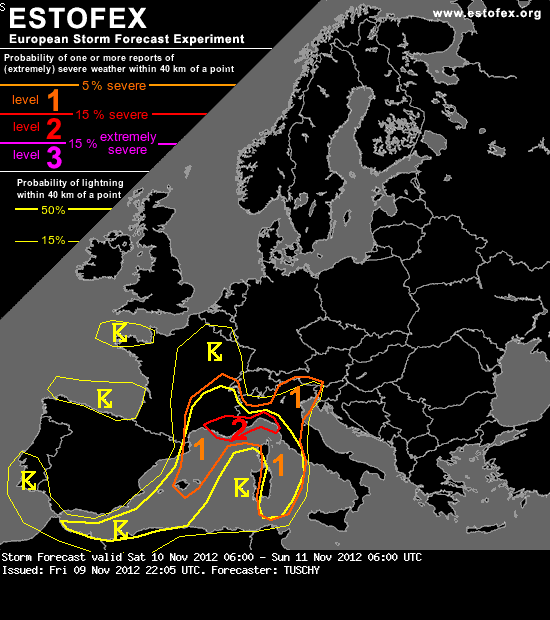 A level 2 was issued for SE France and parts of NW Italy mainly for excessive rainfall amounts.

Widespread CAPE build-up is forecast over the W-C Mediterranean due to cooling mid-levels (W-Mediterranean) or a favorable overlap of rich BL moisture and northward advected EML plume (Tyrrhenian Sea). MLCAPE ranges from 400-800 J/kg with peaks in excess of 1 kJ/kg just east of Corsica and Sardinia. As a 25-30 m/s mid-level streak ejects out of the base of the deepening trough, stronger wind fields overspread the unstable air mass of the Mediterranean with DLS exceeding 20 m/s in most places. LL shear depends on how far an evolving vortex along the S-coast of France deepens but current model outputs place an area of enhanced LL speed/directional shear from C-Italy to the north.

It looks a bit messy regarding initiation of deep moist convection over the far W-Mediterranean. Despite numerous eastward surging fronts, expected strengthening postfrontal pressure fall over the Iberian Peninsula inserts a constant weakening trend and therefore no serious eastward advection of better BL moisture. Therefore, the atmosphere will be weakly capped all day long with mid-level waves offering adequate forcing for scattered CI. A gradual shift to the east of highest activity will occur during the day, but with -25°C at 500 hPa overspreading the far W-Mediterranean during the night, another increase of DMC is expected again to the west. Despite marginal hail, strong wind gusts and locally heavy rain, not much severe is anticipated with that activity. We included the Balearic Islands into a level 1 until noon mainly for heavy rainfall due to repeatedly onshore moving thunderstorms.

The focus for severe shifts east to the major thetae tongue east of Sardinia/Corsica, pointing to the north. Current forecasts show a more or less structured LL vortex to approach NW Italy from the west during the day, increasing the LL wind field substantially. A prolonged period of forcing, favorable profiles for a warm-rain set-up, the venting entrance region of a 60 m/s high-level jet and crosswise onshore flow point to an augmented risk of training thunderstorm activity along the coasts of NW Italy. QPFs already exceed 100 mm/24 h and we would not be surprised to receive a few higher reports. The only negative point could be the limited connection to the plume of rich moisture over the Tyrrhenian Sea, which may keep the overall event in control. We expanded the level 2 to the west (covering most of S-France), as LL vortex may need some time before becoming progressive and therefore a prolonged period of training storm activity probably occurs that far west, too.

Beyond 18Z however, falling geopotential heights and cooling mid-levels finally reach the Tyrrhenian Sea and widespread CI is anticipated in respect of abundant forcing and a weakening cap. Now, an extensive inflow fetch of rich moisture is wide open with trajectories showing an inflow from Malta to the north. Either aforementioned storms from the NW coast of Italy build SE-wards and/or new developement within the moisture tongue result in widespread CI over the N-Tyrrhenian Sea. Training storms along the coasts of W/NW Italy will likely produce heavy to excessive rainfall amounts. With mainly offshore CAPE forecast, thunderstorms along the coasts will also produce isolated large hail, a few waterspouts and strong to isolated severe wind gusts. The severe risk rapidly diminishes onshore (despite the rainfall risk). 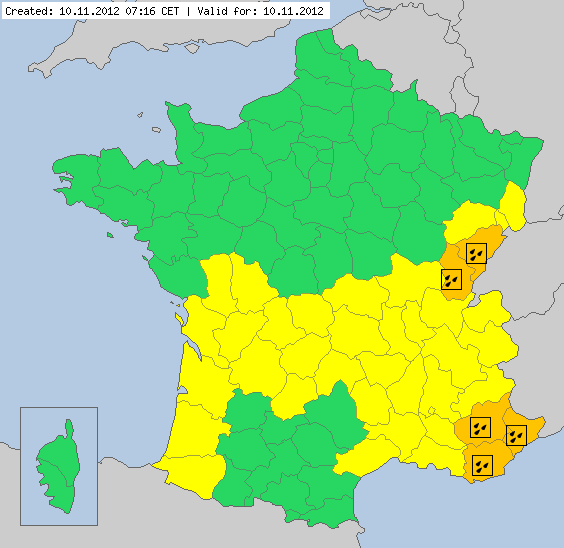 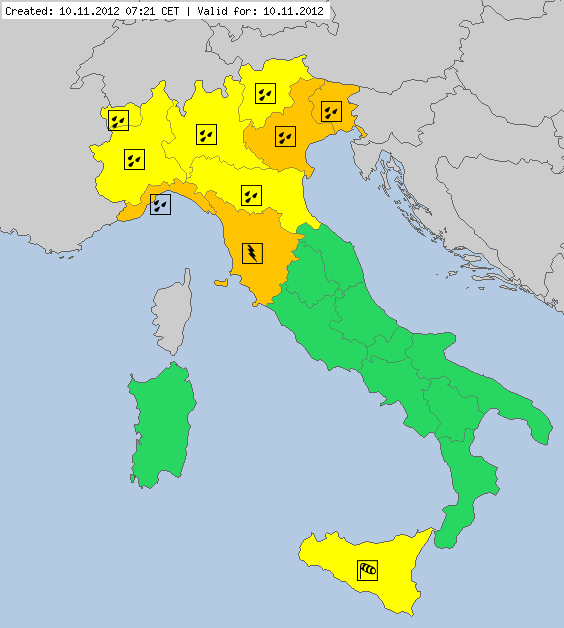