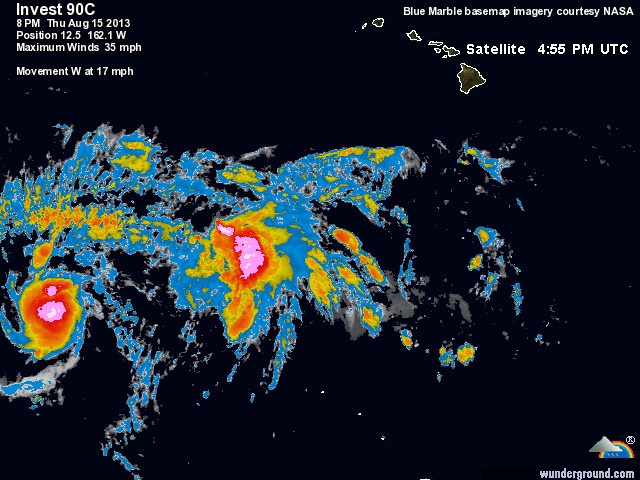 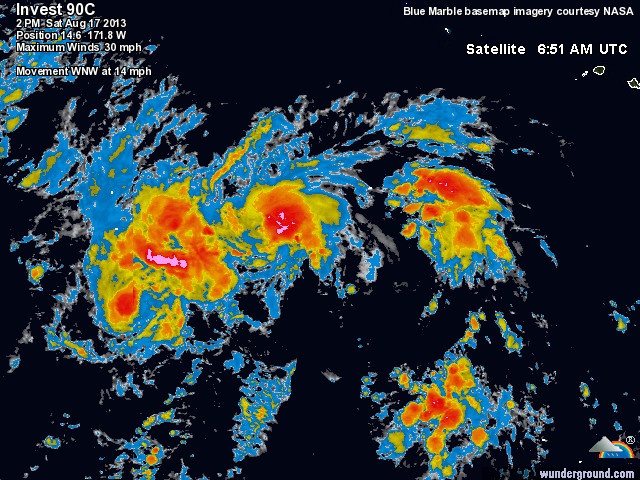 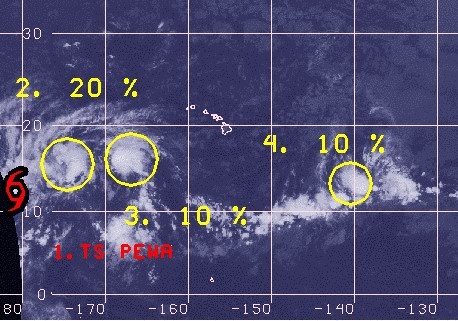 Tropical Storm Pewa changed ocean areas today- and moved from the Central Pacific to the Northwestern Pacific Ocean (crossed the International Date Line), so it now falls under the forecast authority of the Joint Typhoon Warning Center. Meanwhile there are three low pressure areas developing to the east of Pewa in the Central Pacific. Tropical storm Pewa is now about 960 miles east southeast of Wake Island. Pewa is moving toward the west northwest at about 13 mph. Pewa's maximum sustained winds are near 55 knots. Infrared satellite data shows that thunderstorm development and convection have slightly weakened, but the system is still well-organized. Forecasters at the Joint Typhoon Warning Center expect this weakening to be temporary as Pewa is expected to become a typhoon by Aug. 19 and continue on a northwesterly track through open ocean.

The first low pressure area behind Pewa (labeled here on this GOES-West image as #2) has associated showers and thunderstorms. The low is an elongated area of low pressure, and is about 1,120 miles west-southwest of Lihue, Hawaii. The low is moving westward at 10 to 15 mph. Little significant development of this system is expected due to its close proximity to the outflow from tropical storm Pewa. This system has a low chance, 20 percent, of becoming a tropical cyclone during the next 48 hours.

The next low pressure area is also a surface trough (elongated area of low pressure), labeled #3 on the GOES-West image has showers and thunderstorms located about 650 miles southwest of Lihue, Hawaii are moving westward at 10 to 15 mph. Little significant development of this system is expected due to strong upper level winds over the surface trough. This system has a low chance, 10 percent, of becoming a tropical cyclone during the next 48 hours.

The last developing low in the chain also has a 10 percent chance of development. This low also has showers and thunderstorms associated with it, and is 1,100 miles east-southeast of Hilo, Hawaii. The low is moving west-northwest and is being battered by strong southerly winds keeping its development chances low.
Rob Gutro
NASA's Goddard Space Flight Center
Image Credit: NOAA/NHC/CPHC
Every cloud has a silver lining
Marga
Lid
Woonplaats: Den Haag
Berichten: 17643
Lid sinds: 25 jul. 2006
19 augustus 2013, 10:22 uur | Bericht #407203 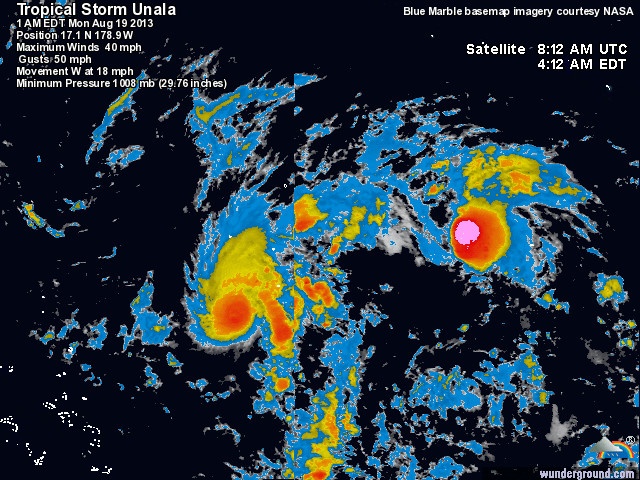 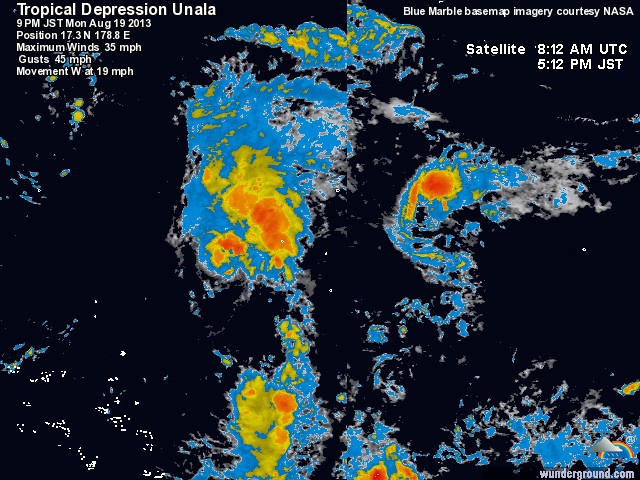