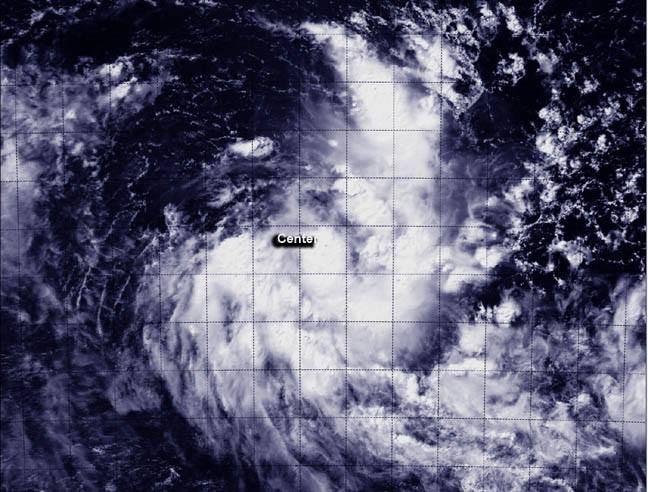 SO INDIAN OCEAN - System 90S appears more organized in satellite imagery today, April 18, and the Joint Typhoon Warning Center has given the low pressure area a high chance for development in the next day or two.

System 90S is located near 12.4 south latitude and 91.9 east longitude, 290 nautical miles west of Cocos Island. System 90S is moving to the southwest at 7 knots, away from the island. Maximum sustained winds are estimated between 20 to 25 knots so its close to depression status already.

The Joint Typhoon Warning Center (JTWC) reported that animated multispectral satellite imagery today showed that the low-level circulation center is consolidating rapidly. There is also an improvement in the banding of thunderstorms around the center. When JTWC forecasters looked at the upper levels of the atmosphere, they found a favorable environment with weak vertical wind shear. Not only is the upper atmosphere cooperating for development, but the low is sitting in warm sea surface temperatures which will further enable evaporation and thunderstorm development.

This visible image of System 90S was taken from the MODIS instrument aboard NASA's Aqua satellite on April 18 at 07:20 UTC/3:20 a.m. EDT. Bands of thunderstorms are evident on the eastern to southern quadrants, wrapping along the western side of the storm.