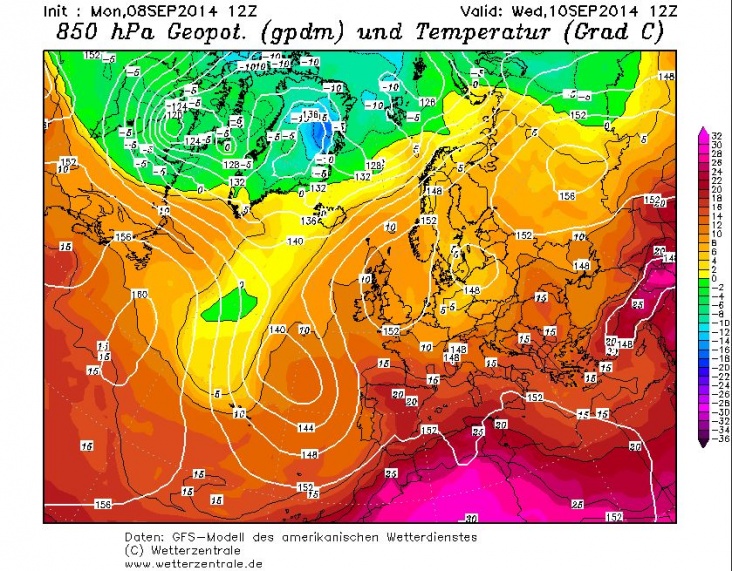 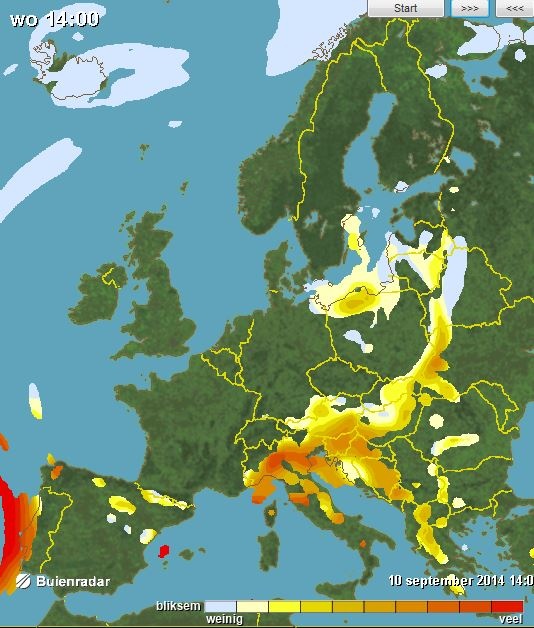 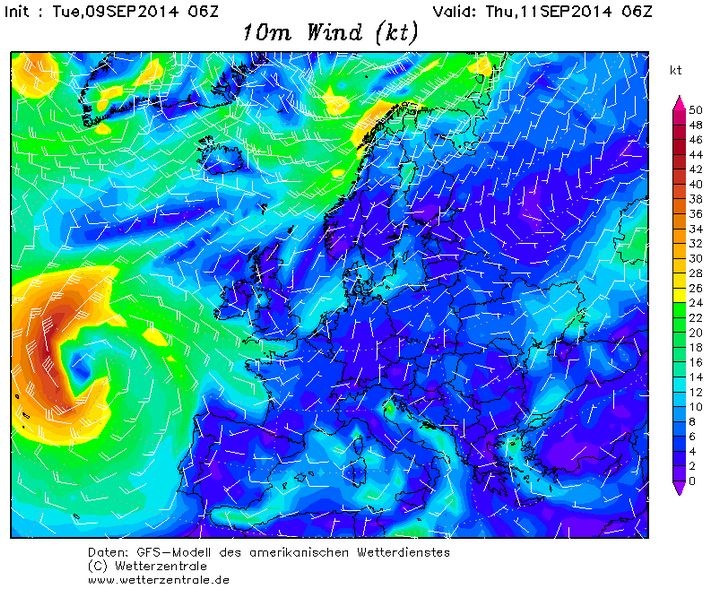 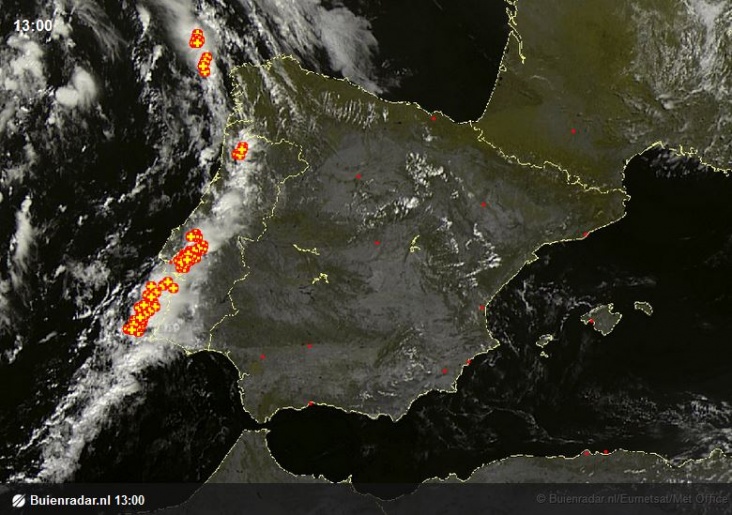 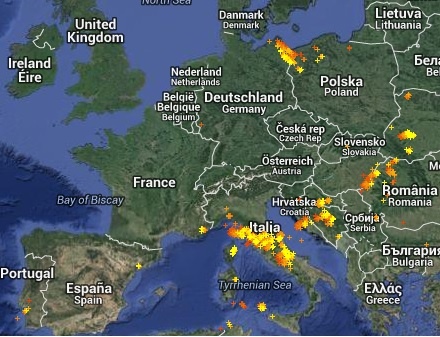 + 0 Tweet
Squall line formed over Portugal
A squall line with a number of thunderstorms has now formed over Portugal. Conditions are in place mainly for multicell thunderstorms although with the favourable SE low level flow some supercells may form. Moderate instability with about 1000 J/kg MLCAPE overlaps with marginal shear in 20-30 kt range. Coupled with moderately favourable QG forcing storm coverage is expected to be moderate to high. Main threats with these storms are heavy rainfall and marginally large hail. The system is moving NE-wards. 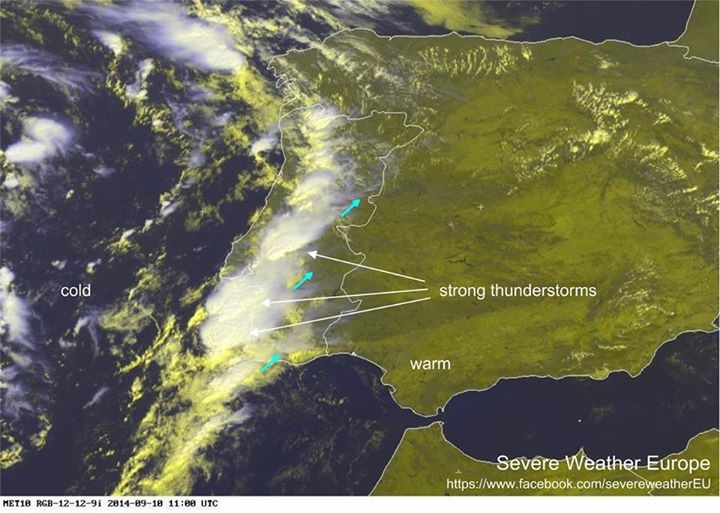 With moderate southwesterly mid-level flow, an elevated mixed layer from Morocco overspreads southern and eastern Spain and the adjacent Mediterranean Sea. Over the maritime boundary layer with dewpoints around 20°C, moderate to high CAPE will result, possibly up to 2000 J/kg (refer to Fri 12 UTC's Palma sounding). Deep-layer shear increases from 10 m/s to more than 20 m/s from northwest to southeast across the Iberian Peninsula.
Onshore and upslope flow is forecast to feed some moisture inland along the Spanish east coast, where the sea breeze front with dryline characteristics will act as the main trigger mechanism for thunderstorms. On synoptic scales, the passage of a weak short-wave trough indicates that some lift will be present until noon, followed by subsidence afterwards. Due to this unfavorable timing, storm coverage will likely not be too high, but any forming storm may turn into a well-organized multi- and supercell with a risk of large hail (possibly even exceeding 5 cm in size) and severe downbursts.
A level 2 was issued for a small area in eastern Spain where convective initiation appears likely enough under the robust CAPE-and-shear overlap. It is surrounded by a level 1 to the south, where the stronger capping makes convective initiation less likely, and to the north, where vertical wind shear is weaker. However, some models suggest that activity may go on through the evening and well into the night in Catalonia, which seems plausible in case outflow boundaries trigger secondary convection. Flash floods would become an additional risk in this case.
Storms will quickly decay when they move offshore, where a strong cap is in place.

Rich Atlantic moisture is advected inland and allows some hundred J/kg of CAPE in response to daytime heating. Scattered, mostly unorganized storms are expected, especially in the afternoon. Severe weather is unlikely. 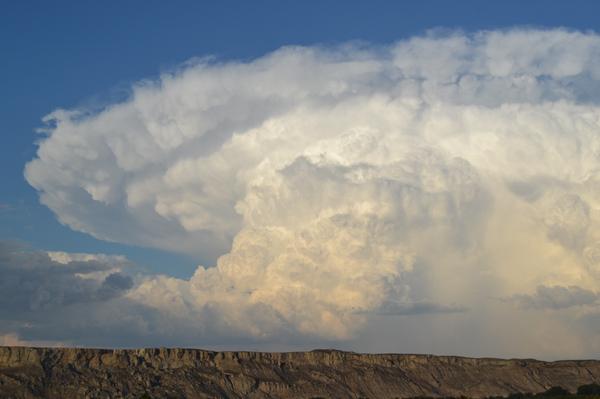 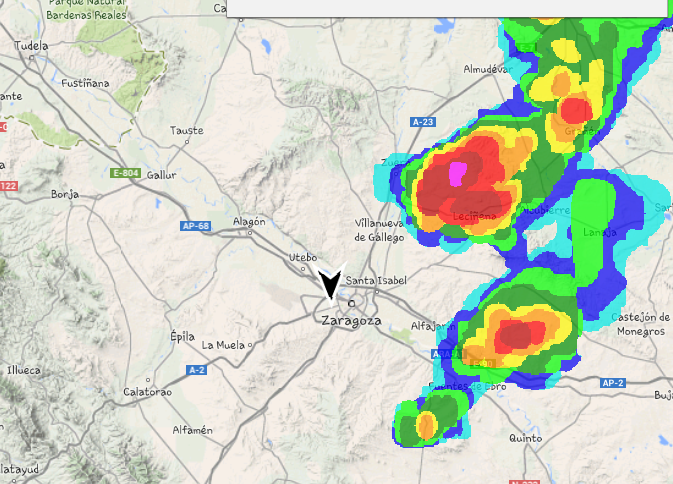 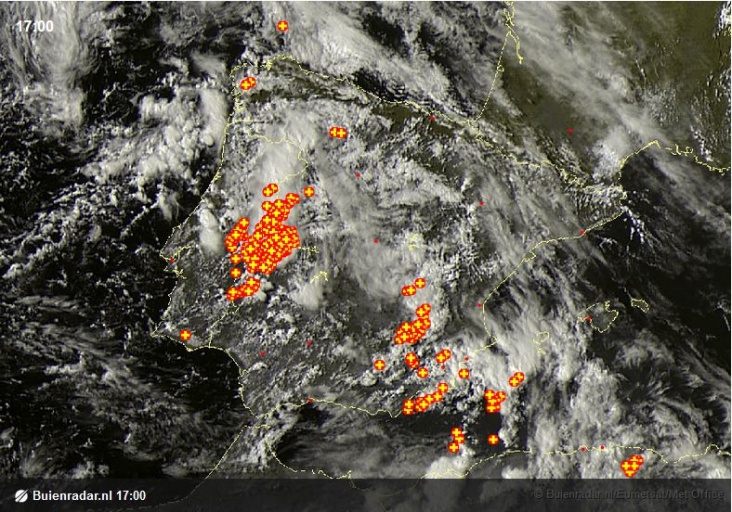