A national pattern change is coming in the USA

+ 0 Tweet
A national pattern change is coming in the USA and Canada
Wild swings in temperatures often occur during September as we transition out of summer and start to head towards winter. However, the temperature roller coaster has been especially pronounced this year.Most of western Canada, with the exception of the coast of British Columbia, has been colder-than-average so far this month, but that does not tell the full story. Despite the cold pattern, Calgary was 25.8 on Sunday before the record snowfall arrived on Monday.

Warmer than average temperatures have dominated the first 10 days of September in eastern Canada, with parts of southern Ontario recording their highest temperatures and humidex of the summer during this period.

The temperature contrast across the country was especially pronounced on Wednesday and Thursday. The various shades of purple and violet across the southern Praires represent temperatures of 10 to 16 degrees colder than average. Meanwhile, temperatures were several degrees above seasonal across much of eastern Canada.

However, we are now in the midst of a pattern change as the chilly weather across the Prairies is on the move into eastern Canada. Fortunately, the temperatures will not be nearly as cold relative to average as what the Prairies experienced.

By the weekend, temperatures across the country will be remarkably uniform (with the exception of the southern B.C.) as high temperatures recover to the mid-to-upper teens across the Prairies.

The western warm-up will continue into next week. By Wednesday the pattern across the country will be nearly opposite to what we saw during the first ten days of the month with the coldest weather relative to average centered on the Great Lakes (shown by the blue and green colors) and above seasonal temperatures for Alberta and British Columbia (as indicated by the orange and red colors). However, parts of Atlantic Canada will not experience a significant pattern change as near to slightly above seasonal temperatures continue.

The south coast of British Columbia will remain in a warm pattern through the middle of next week, with especially warm temperatures expected for early next week. For example, Port Alberni will approach 30C on Monday. However, it looks like a period of cooler and wetter weather will arrive for the end of the week.

Looking further ahead to the start of autumn, it looks like we will have a period in which mild temperatures will dominate the country. While the model forecast shown below for the first day of autumn is likely overly optimistic, most models agree with that we will start the autumn season with an absence of well below seasal temperatures across the country.

The map below shows the overall temperature pattern across North America during the first 10 days of the month. The blue and green temperatures highlight regions where the temperatures have been colder than seasonal while the various shades of orange and red highlight the regions that have seen above seasonal temperatures. 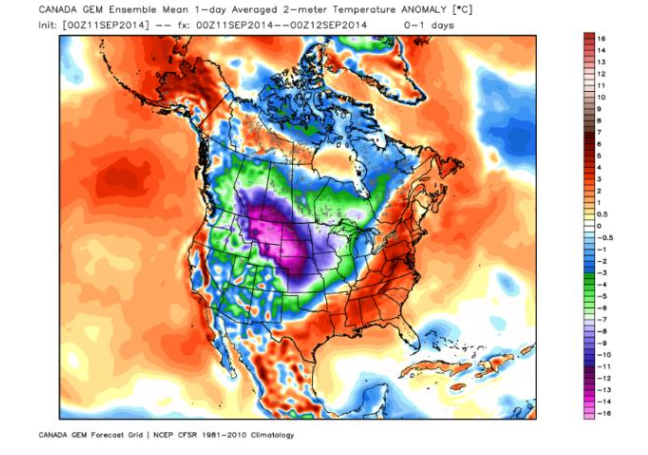 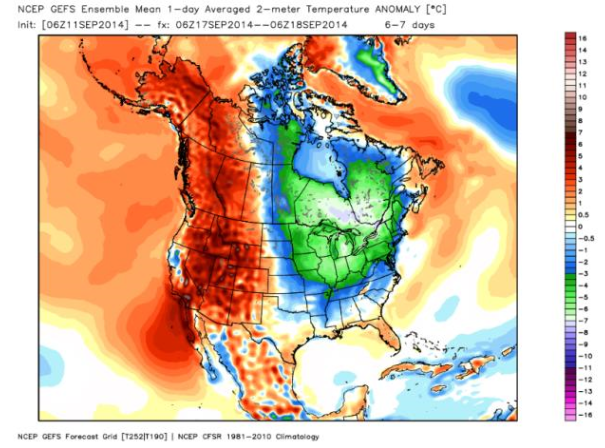