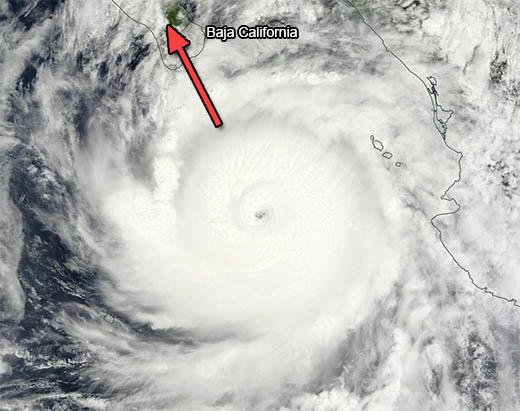 + 0 Tweet
Rapidly strengthening Hurricane Odile further intensified Sunday morning and was swirling over the Pacific as a major storm expected to make a close brush with the southern portion of Mexico's Baja California peninsula by nightfall.

The U.S. National Hurricane Center in Miami said Odile became a powerful Category 4 hurricane before dawn Sunday. Odile's core was predicted to stay out in the Pacific, but it was following a track that was forecast to take the storm's edge very close or even over Baja's southern end by Sunday night and into Monday.

The storm's maximum sustained winds had increased to 215 km/h Sunday morning. It was centred about 360 km west of Manzanillo, Mexico and 460 km south-southeast of the southern tip of Baja California. Odile was moving to the north-northwest at 24 kph. 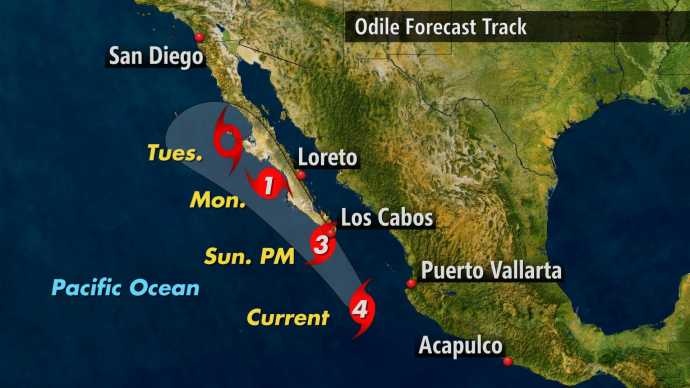 "It is time to evacuate high-risk areas to guarantee well-being. We reiterate that even though it is not raining it is essential to safeguard life," Covarrubias said in a Facebook post. "The most important thing is not to expose ourselves."
The Hurricane Center's public advisory said the eye of the storm is expected to move northwest over the next two days. 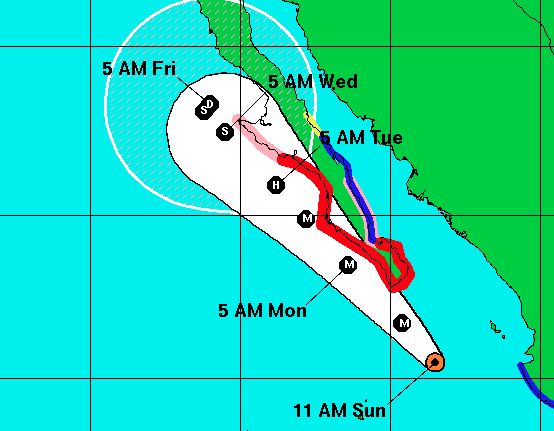 Residents and tourists hunkered down in shelters and hotel conference rooms overnight as a powerful and sprawling Hurricane Odile made landfall on the southern Baja California peninsula. The hurricane brought huge waves, heavy winds and pounding rain to Cabo San Lucas, with landfall occurring at 10:45 p.m. local time. Christina McFadden says she and her husband had to be rescued by hotel employees after a window blew out in their room, trapping them inside. "When the glass broke, we hid behind the chair and next to the toilet and then I told my husband, 'I think we need to leave,' because it sounded like the building was falling apart," she told ABC News. The couple was later taken to a hotel hurricane shelter. “We're sweating profusely, it's very hot here," she said. "We're in a room with about 200 people and a lot of people are sleeping or trying to sleep, but I don't know, we're just up." 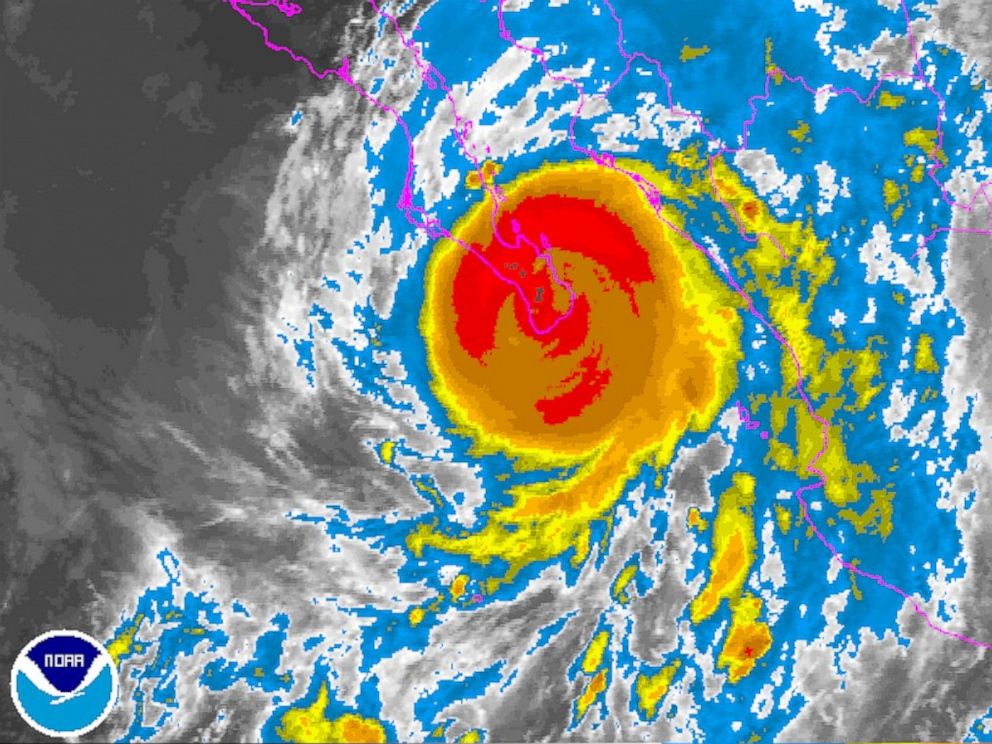 CABO SAN LUCAS, Mexico  Hurricane Odile barreled through the Mexican beach mecca of Baja California early on Monday, thrashing luxury resorts and tearing trees from roots as tens of thousands of tourists hunkered down in shelters.
Winds of up to 115 miles per hour (185 km/h) buffeted shelters, ripping away boards nailed over windows as one of the worst recorded storms slammed the golden sand beaches of the popular resort of Los Cabos on the west coast of the country.
The U.S. National Hurricane Center said the category 3 hurricane was "battering" the south of the mountainous desert peninsula. It added that heavy rains were likely to trigger life-threatening flash floods and mud slides.
However the weather service said Odile was expected to slow as it pushed north-northwest along the peninsula and forecast the storm would steadily weaken over the next two days.Winds eased slightly as the storm moved over land. But because it struck in the middle of the night, details were scant on the extent of any damage early Monday.
Tourists stranded in shelters or hiding in the bathtubs of their rooms posted photos on social media showing windows, barricaded with furniture, after they were blown out by the strong winds.''This is really bad. My ears are about to explode by the pressure and I have an inch of water in my kitchen/living room," said Sarah McKinney on her Twitter account. Hurricane Odile raked the Baja California Peninsula with strong winds and heavy rains early Monday as locals and tourists in the resort area of Los Cabos began to emerge from shelters and assess the damage.The extent of Odile's impact was still not clear before daybreak, but the storm severely damaged hotel lobbies and facades, shattered windows and left streets full of debris. The windows at the area's Westin Hotel had been blown out.The newspaper Tribuna de los Cabos reported people being injured by flying glass, power lines and traffic signals down throughout the city, and a fire at the Cascadas resort on Medano Beach. No details about the blaze were immediately available. 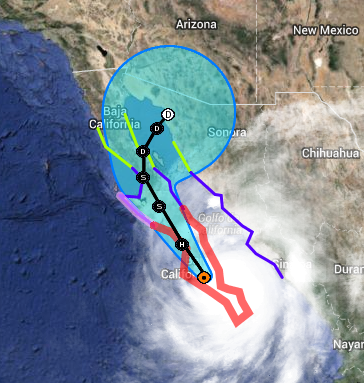 Horrible. This is the resort we evacuated from - Grand Solmar. Restaurant damaged. Half of pool in the ocean. #Odile pic.twitter.com/e07Ku5xL52


It's so quiet down at the marina. The only thing you hear is car alarms and footsteps. pic.twitter.com/X5TiyjiCXc


2 days ago we walked along the marina happy with not a care in the world. Today I'm shocked and saddened. #Odile pic.twitter.com/AK9RO65m3Y


Restaurant roof collapsed at playa grande #odile #cabo. The staff is doing a great job. Has food and water for all. pic.twitter.com/HWcRMD51t4 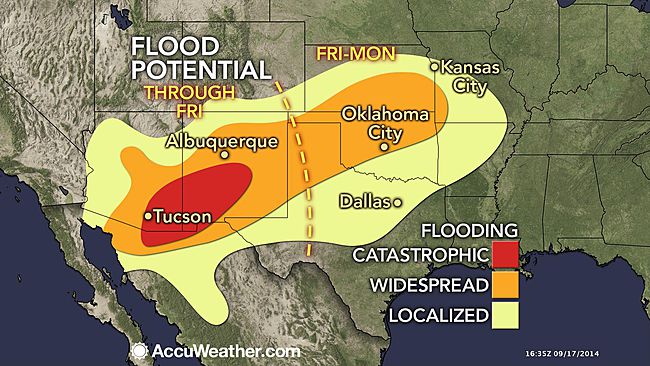 The heaviest rainfall will hit the Southwestern states of Arizona and New Mexico where a general 3 to 6 inches will fall, but local amounts of 10 inches or more are possible on the slopes of the mountains. Rainfall of 1 to 2 inches per hour can occur.
There is a significant risk to lives and property in the region.

"Not only will flash and urban flooding occur in this case, but there is the potential for major river flooding," Clark said.
Since early Tuesday, nearly 2 inches of rain has fallen on Deming, New Mexico, with close to an inch at Truth or Consequences, New Mexico. Near Stafford, Arizona, 2.6 inches of rain fell in six hours early Wednesday morning. The amount of rain and rainfall rates will continue to ramp up in parts of the Southwest through Thursday.
This is the type of threat that can cause water to sweep through normally dry stream beds, called arroyos, and into villages, towns and major cities rapidly. Major roads can be damaged and some bridges along secondary roads could be swept away. Mudslides and dust storms can block roads in a few locations.

The combined rainfall from Norbert and Odile has the potential to cause this September to be the wettest ever in some areas. For example, according to the National Weather Service, the record rainfall for September at Tucson is 5.60 inches, which was set in 2001. Thus far this month, about 2.7 inches of rain have fallen at Tucson.
Cities that could be affected by the heavy, flooding thunderstorms include Phoenix, Flagstaff, Tucson and Yuma, Arizona; Albuquerque, New Mexico; and El Paso, Texas.

Spotty, heavy thunderstorms can reach as far to the north and west as Las Vegas, Palm Springs, California, and Salt Lake City, Utah.
"The greatest risk of widespread flooding in the Southwest will be from early Wednesday morning into Thursday night," Clark said.
"However, spotty heavy showers and thunderstorms will continue, especially over the higher terrain, into the weekend and can lead to additional flooding in isolated areas." 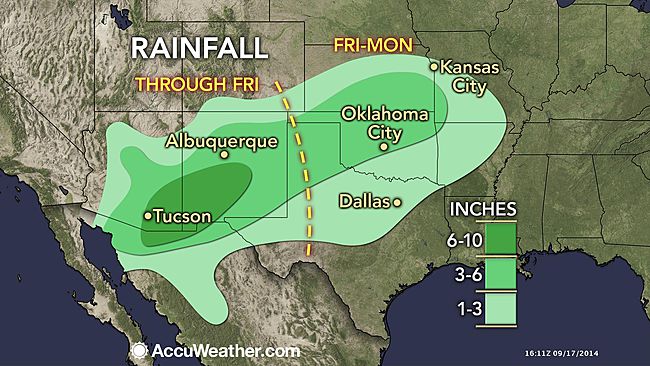 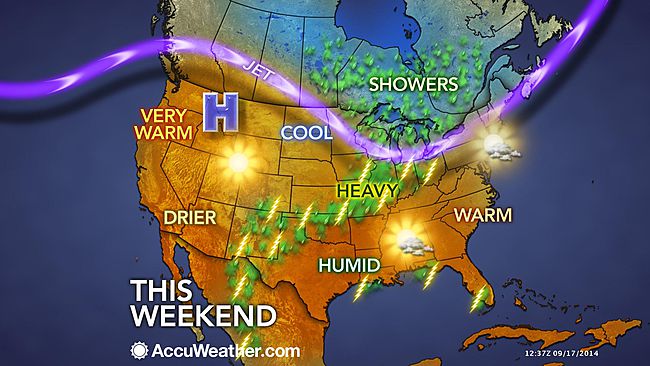 + 0 Tweet
Overstroming dpor Hurricane Odile
A slowly moving area of thunderstorms brought heavy rain and flash flooding to the Austin, Texas, area early Thursday morning. Multiple water rescues have been reported and more than 7,000 were without electricity.Numerous roads were closed overnight in the city of Austin as rainfall totals of more than 4 inches have been reported in some spots. Estimated rainfall totals in the Austin, Texas area. Camp Mabry/Austin City reported 3.27 inches of rain in just two hours. North of Austin in Georgetown, Texas 6.10" of rain was reported. There have been over 50 low-water crossings that have been closed, according to atxfloods.com. The Lower Colorado River Authority opened three floodgates releasing water from Lake Austin into Lady Bird Lake. They also reported that Lake Travis rose six inches since midnight. The threat of flash flooding continues through Thursday due to upper-level disturbances moving through the area, along with tropical moisture. Another 1-2 inches of rain is expected across the area and some spots could see up to 3-5 inches. The ground is already saturated, so any additional rainfall could produce more flash flooding, as well as rapid rises in rivers, streams and creeks.