Emergency workers spent early Monday going door to door to find more injured, Allen said. Once we get daylight, we will be able to identify areas that are affected and lead responders in to verify the [houses] are clear of any individuals needing medical attention," he said. The American Red Cross was also on the scene and establishing a shelter in a local church, Allen said. The severe weather struck around 8:45 p.m. local time (9:45 p.m. ET). It was one of at least 26 tornadoes reported across the U.S. on Sunday.

Meanwhile, up to 50 million Americans were in the line for a wet and windy Monday as a band of thunderstorms and severe weather stretched down the country's midsection. Tornadoes remained a hazard with coastal Texas, including Houston, remaining under a tornado warning until noon, The Weather Channel's Kevin Roth said.

Later in the day, "anywhere from eastern Texas up to southern Michigan there is a threat of tornadoes in the mid-to-late afternoon," he said. A rare May snowstorm that brought more than a foot of snow to parts of South Dakota and Wyoming was set to end by Monday morning, according to forecasters. The remnants of Tropical Storm Ana was also set to continue drenching North Carolina. Meteorologist warned that minor flooding was possible. 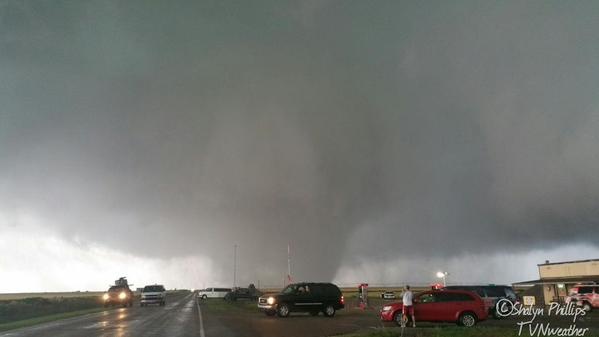