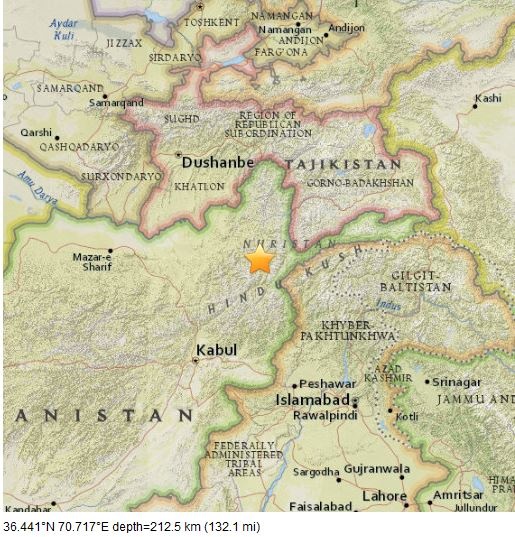 A powerful 7.5-magnitude earthquake has struck in northern Afghanistan and has been felt in a large area from northern India to Pakistan with scores of people killed across the region.

The US Geological Survey put the epicentre of Monday's quake near Jarm in Afghanistan's northeast, 250km from the capital Kabul and at a depth of 213km.

The total death toll stood at 249 with at least 185 people killed in Pakistan and at least 64 more in Afghanistan, according to official reports from the two countries.
Nawaz Sharif, the prime minister of Pakistan, cut short his visit to the United Kingdom to fly home to deal with the emergency.Hikmat Fasi, a resident of Parwan Province in northern Afghanistan, said the quake caused a lot of damage in the area.
"We are safe but I saw a lot of buildings collapse," Hikmat Fasi said. "It [earthquake] caused severe damage to our area. We are just praying."According to the Inter-Service public relations office, all military hospitals and helicopters were put on standby and high alert.

Strong tremors were also felt in New Delhi and Islamabad, residents said, as authorities in India and Pakistan issued warnings for strong aftershocks.

Al Jazeera's Kamal Hyder, reporting from Islamabad, said walls in the Pakistani capital swayed back and forth as people poured out of office buildings in a panic.

At least 38 people died in northwest Pakistan, officials told Al Jazeera, as reports of damage or casualties were trickling in from across the country. At least another 100 were injured, initial reports said.
Shaukat Iqbal, a resident from Charsadda district in the Khyber-Pakhtunkhwa said it felt as if the earthquake "kept getting worse with time".

"I could see homes, buildings shaking. We are terrified and I am unable to reach my family living in Malakand district. All phone lines are shut."

Waqas Habibi Rana, a resident from Lahore, said many people fled their homes and office buildings as the city was hit by the tremors.

"As soon as we felt the first tremor we stepped out of our home. It stopped for a few seconds, but started again," said Waqas.

"The third tremor was really severe. It was by far the worst earthquake I have ever experienced in Pakistan. Everyone was scared and praying. It has triggered landslide in Baltistan [a mountainous region in Pakistan situated in the Karakoram mountains just to the south of K2], Waqas added.

Al Jazeera's Nidhi Dutt, reporting from New Delhi, said many residents of the Indian capital had already moved back into their buildings.

"The city's metro system was still down as part of the security measures," Dutt reported.