+ 1 Tweet
WEAK IMPACT:
As expected, a CME hit Earth's magnetic field on Dec. 31st (00:30 UT). The impact, however, was weak and did not produce a geomagnetic storm. Auroras are still possible in the hours ahead as Earth moves through the CME's turbulent wake, but so far this has not been a significant space weather event
Bron: http://www.spaceweather.com/ 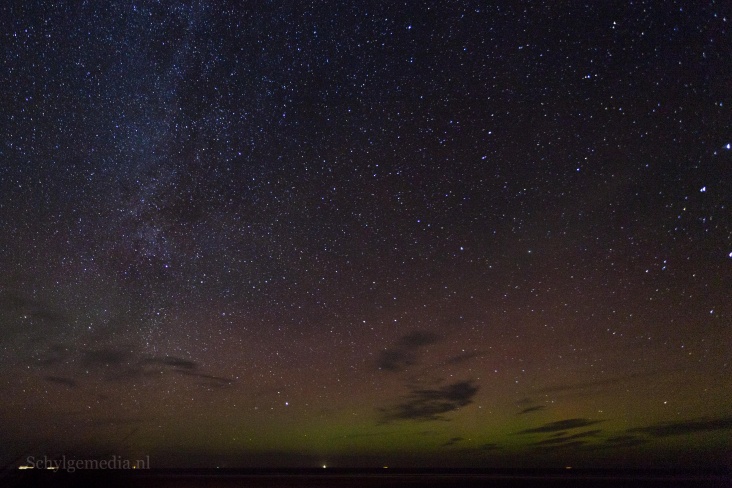 + 2 Tweet
NEW YEAR'S GEOMAGNETIC STORM:
A G2-class geomagnetic storm is in progress on Jan. 1st, sparking the first auroras of the New Year. In Glenfarg, Scotland, fireworks exploded against a backdrop of green: Our neighbours let off some fireworks for the New Year," says photographer Stuart Walker. "They were modest compared to the organised display in Edinburgh, but looked great alongside the ongoing aurora."

This storm is the result of a CME strike on New Year's Eve (Dec. 31 @ 00:30 UT). At first the CME's impact had little effect. Indeed, we initially ruled it a "dud." But as Earth moved deeper into the CME's wake, solar wind conditions shifted to favor a storm. "It was a beautiful treat to see the auroras kick off the New Year," says Nakamura. "The display began after midnight and kept glowing with waves and beams until the twilight painted light over the aurora. It is summer now in New Zealand and my four year old son was delighted to come with me as it is warm even at night."

Those were the first auroras of 2016. Now for seconds: NOAA forecasters estimate a 75% chance of more polar geomagnetic storms on Jan. 1st, subsiding to 45% on Jan. 2nd as Earth moves through the wake of the CME
bron:http://www.spaceweather.com/
Terug naar boven
Bericht toevoegen
1 Gebruiker leest nu dit topic, onderverdeeld in 1 gast en 0 leden