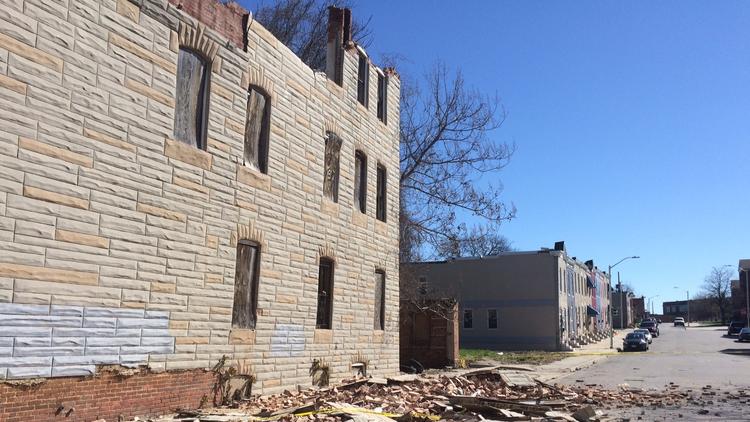 This building at Fulton Avenue and Presbury Street was one of several that collapsed in Baltimore on Sunday. (Colin Campbell)

Wind gusts of up to 62 miles per hour late Saturday and early Sunday knocked down several buildings and trees, cut power to tens of thousands of customers and was believed to have caused at least one house fire, authorities said.

Late Saturday, a 58 mph gust was reported in Glyndon, in northwestern Baltimore County, and a gust estimated at 60 mph downed tree branches in Towson and caused power outages, the weather service reported.

The wind gusts led to the collapse of several vacant and abandoned buildings in Baltimore, housing officials said.

"We suspect at this time that wind is a principal cause," said Tania Baker, director of communications for Baltimore Housing. "When there is extreme weather — like the heavy winds that we saw — there is an impact on aged and abandoned housing stock."

Workers with the Baltimore City Department of Housing and Community Development demolished buildings at 1609 Mosher and 1701 and 1703 N. Fulton. Four other properties — 1623 N Payson, 1526 Druid Hill, 1523 Retreat and 1036 Arlington — were condemned by city building inspectors, but did not require emergency demolition. These properties will be evaluated in the morning.

There were no entrapments or injuries at any of the buildings, the Baltimore Fire Department said.

The collapses come days after retired truck driver Thomas Lemmon, 69, was killed last week when a vacant rowhouse collapsed onto his prized Cadillac near his home in the 900 block of N. Payson St. in West Baltimore.

Winds were also to blame for causing at least one fire Sunday and helping another to spread.

Anne Arundel County firefighters arrived at 1700 Green Meadow Court in Severn at 6:30 a.m. Sunday to find a fire at the back of the house, spokesman Capt. Russ Davies said. They quickly extinguished it without major injuries.

Investigators believe the fire was started by wind blowing ashes from a fire pit onto some mulch, Davies said. Damage was estimated at $11,000.

In Woodbine, fire investigators say strong winds caused a fire in a home to spread quickly and destroy the structure.

That fire broke out shortly after 7 a.m. Sunday. The Maryland State Fire Marshal's office said the married couple who owned the house woke up to the fire on their rear deck. They were able to escape with their child, but were unable to get back inside to save a dog, and a cat died.

Investigators say it took an hour and a half to bring the fire under control. Damage was estimated at $225,000. The cause is under investigation.

In Pasadena, firefighters called to 8300 Capel Drive Sunday morning found a large tree had fallen on a house and partially collapsed the second floor. The one person in the house at the time escaped without injury.

By Sunday night, Baltimore Gas and Electric Co. said it had restored power to more than 36,000 customers throughout Maryland.

Wind restrictions and warnings were issued for area bridges.

Temperatures spent most of Sunday in the 30s and 40s before hitting 50 degrees by 5 p.m. at Baltimore/Washington International Thurgood Marshall Airport.

Similarly cold temperatures were forecast overnight Sunday into Monday, and a freeze was likely Monday night into early Tuesday morning. Lows early Monday are forecast in the mid 30s.

A freeze watch is in effect from late Monday night into early Tuesday morning, with lows expected in the mid-20s to the north and west of Baltimore and in the lower 30s around the city and suburbs. Meteorologists warned that unprotected house plants and crops that have sprouted amid early spring warmth could be damaged or killed.

Temperatures were expected to rebound Monday afternoon to reach the mid-60s for opening day at Oriole Park at Camden Yards, but rain could arrive in the afternoon hours.

More unseasonably cool daytime temperatures in the 40s and 50s are forecast for the middle of the week.