Above-normal warmth will dominate most of Europe into autumn as late-summer weather patterns stretch into the new season. While many countries experience a warm autumn, Ireland and the United Kingdom can expect a wet and windy season. 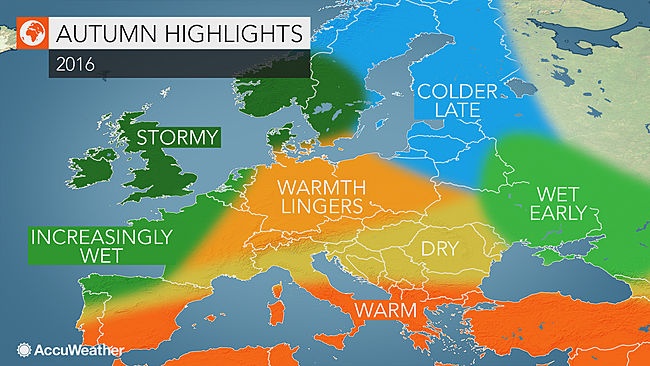 Wet, windy conditions to stretch from Ireland and the U.K. into Scandinavia On the heels of a cool and wet summer for parts of the United Kingdom, an increasingly stormy autumn is expected. Frequent storm systems from the Atlantic Ocean will bring rounds of rain and gusty winds to the British Isles before lashing southern and western parts of Scandinavia.

Wind storms will become more likely as the season progresses with multiple named storms expected before the end of November. The strongest winds and most rainfall is expected to target Northern Ireland to Scotland early in the season before increasing in frequency throughout the rest of the British Isles from late October into November. While the most widespread damaging winds will not target Southern England, rain will increase the threat for flooding late in the season," AccuWeather Meteorologist Tyler Roys said.

Post-tropical cyclones from the Atlantic Ocean will add to the stormy pattern across the U.K. with heavy rain and locally damaging winds. The highest risk for tropical impacts will be from late September through October. 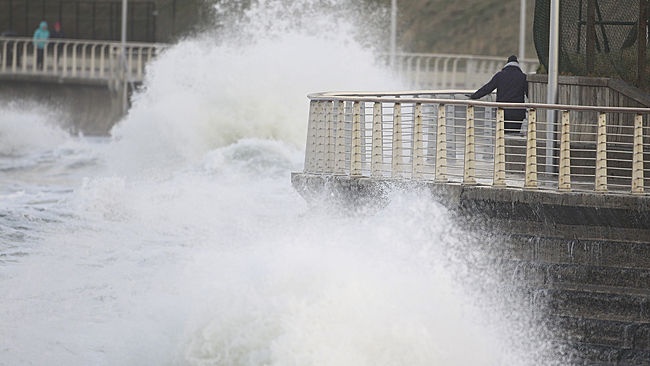 A woman braves the elements as she walks along the sea front at Portrush, Northern Ireland (AP Photo/Peter Morrison)

The wet and stormy weather pattern will result in largely near- to below-normal temperatures across the Isles with the best chance for above-normal warmth occurring in southern England. A very wet summer across southern Norway and Sweden will continue through November as the frequency and intensity of storms both increase from September through November.

While above-normal rainfall is expected, temperatures will actually be near to slightly above normal throughout the season as cold shots press farther east.

Warmth to give way to storms from France to Germany
A surge of heat is expected to linger through the first half of autumn in areas from France and Switzerland to Slovakia and Poland. Several stretches of prolonged warmth are expected in September before a turn to more seasonable temperatures arrives later in the season. While an intense heat wave is not expected, temperatures more typical of midsummer will prevail during the first half of the season.

Early season warmth will also aid in the development of thunderstorms.

While widespread severe weather is not expected, locally damaging thunderstorms and flash flooding will be a serious threat. Warm weather will be replaced by cooler and more seasonable air later in the season as air masses from the Atlantic follow in the wake of each storm," AccuWeather Senior Meteorologist Alan Reppert said.

This pattern will unfold in late October and November as storms from the Atlantic track farther south, enhancing the risk for damaging wind events. The greatest threat for damaging winds will be across northern France, Belgium, Netherlands, Denmark and northern Germany.

While the increased frequency of storms later in the season will end any prolonged heat, brief periods of unseasonable warmth are still possible into early November throughout the entire region.

Warm and dry from Spain to Italy and Balkans
Overall, a warm and dry autumn is expected across southern Europe as a building ridge of high pressure develops over the Mediterranean Sea. This area of high pressure will keep the storm track focused farther north and limit widespread rainfall across the region.

Surges of warmth from Africa and the Mediterranean will be frequent throughout the season, leading to above-normal temperatures across southern Spain, southern and central Italy and the southern Balkans. A forest fire approaches houses in Curral dos Romeiros, on the outskirts of Funchal, the capital of the Madeira Island, Portugal, Tuesday, Aug. 9, 2016. Flames from forest fires licked at homes around Funchal, casting a smoke plume over the downtown and forcing the evacuation of more than 400 people. (AP Photo/Helder Santos)

The heat will fluctuate more across the northern Balkans with the most unseasonable warmth expected through the middle of October. While rainfall is expected to be below normal across the region, thunderstorms will still occur at times. Though widespread flooding is not expected to be a concern, localized flooding is possible from thunderstorms with the greatest threat in the northern Balkans.

Meanwhile, drought conditions will continue and may worsen across southern Italy and the southern Balkans. A high wildfire danger will continue throughout much of the fall in Portugal, Spain and southern France," Roys said. Relief will arrive late in the season as rainfall increases during November.

Aside from lessening the threat for wildfires, any rainfall over Spain and Portugal will be welcomed as drought continues across much of the Iberian Peninsula," Reppert said.

Early warmth to be replaced by cold shots from Poland to Baltic states
Summerlike warmth will prevail from Poland into the Baltic states in September before yielding to shots of cooler air from the north. Early season thunderstorms are likely as warmth ahead of frontal boundaries provides the fuel for gusty or heavy thunderstorms. The storm track will feature more storms across Scandinavia and through the Baltic states during the second half of the season, resulting in more widespread rainfall and shots of colder air.This colder air will set the stage for the first widespread snowfall of the season in the Baltic states during the second half of November.

accuweather.com
there can be only one
raspy
Lid
Woonplaats: deventer
Berichten: 116
Lid sinds: 25 aug. 2015 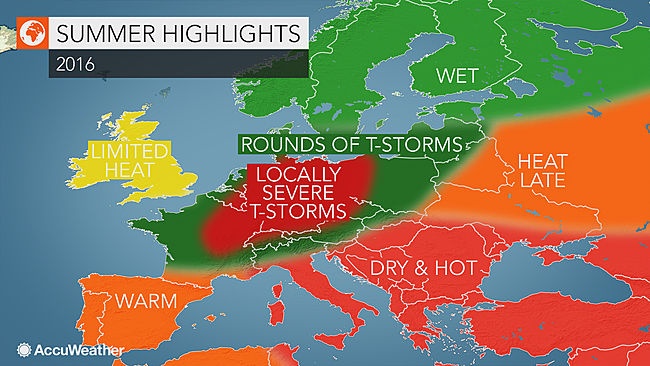 Frequent storms, occasional heat to stretch from Paris to Berlin and Warsaw
The predominant storm track for the summer months will send storms from the north Atlantic Ocean eastward into Scandinavia and the Baltic states.

The result of this pattern will be occasional heat building northward and interacting with cold fronts racing eastward across western and northern Europe.

This interaction will result in numerous episodes of rain and thunderstorms from France into Germany, Poland and the Baltic states.

Some of the storms will be severe with the greatest threat for damaging storms in eastern France, Belgium, Netherlands, Germany, western Czech Republic and western Poland.

The strongest thunderstorms will produce damaging winds, hail and even isolated tornadoes.

Flash flooding will also be a concern due to slow-moving thunderstorms, with the greatest threat stretching from eastern France into southern Germany and western Czech Republic.