A tornado watch was extended until 4 a.m. for the Chicago area.

One person was confirmed dead after being struck by a falling tree in Ottawa, MyWebTimes reported, and a second person was seriously injured. The LaSalle County Nursing Home was heavily damaged, but a woman answering the phone at the LaSalle County Nursing Home Tuesday evening told Fox 6 no one was seriously injured. Several residents were reporting bumps and bruises.
Significant tornado damage was also reported in Washburn and Naplate, Illinois, where there were unconfirmed reports of people trapped, as well as gas leaks. Just after 10 p.m., a "large and extremely dangerous" tornado was spotted near Crossville in White County with reported damage, according to the NWS.


A shelter for displaced LaSalle County residents was set up at Ottawa High School at 211 E Main St., and a reception center was opened at Waltham School at 248 W Canal St. in North Utica, according to the Red Cross.

Tornadoes in February are rare but not unheard of in Illinois, the National Weather Service in Romeoville told MyWebTimes. "History is showing we’ve had them every month of the year in the area," with five February tornadoes between 1950 and 2015, meteorologist Kevin Donofrio said. Tornado season typically peaks in April through June.

A severe thunderstorm warning remained in place for much of Chicagoland until 10:45 p.m.

Weather officials were cautioning Chicago area residents to stay tuned as severe thunderstorms continue to move across northern Illinois and into northwest Indiana this evening. The strongest storms are across Livingston, southern Will and into northern Lake county Indiana, according to a Facebook update from the National Weather Service in Chicago shortly before 7 p.m. Storms elsewhere across the area were capable of producing damaging winds and large hail. 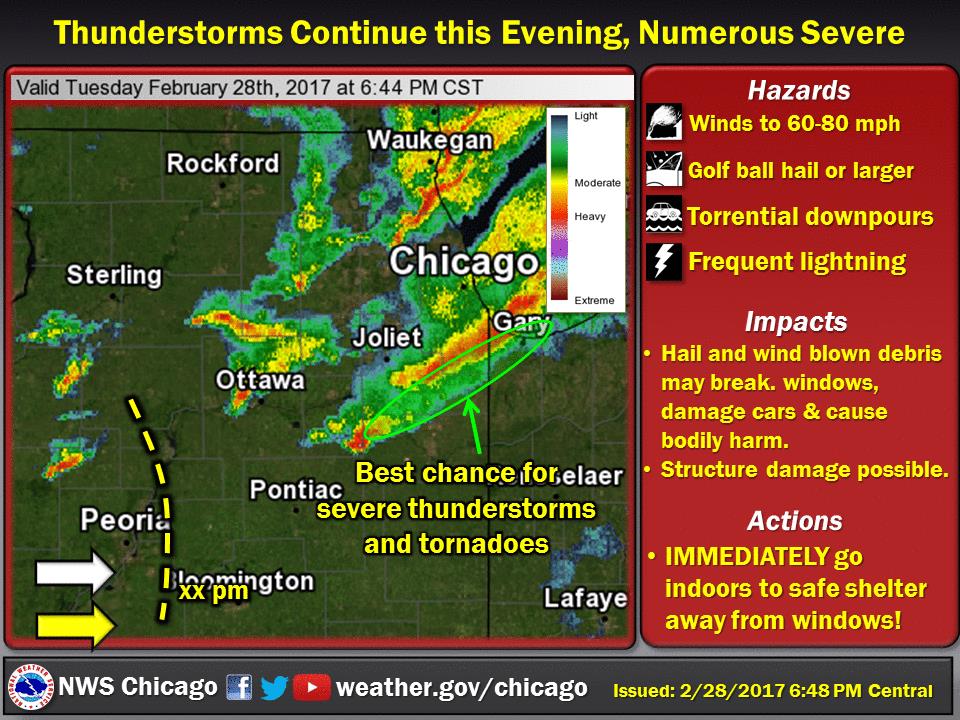 A deadly #tornado tossed cars like matchbox toys onto I-55 last night in Perryville, MO. This is what's left after a dozen + were cleared. pic.twitter.com/Jhl227wIfd

Severe damage this bank in Franklin - unconfirmed reports of a #Tornado touchdown there @NC5 pic.twitter.com/lRMiY5TC75

NEW: Stunning video of this #tornado warned storm system as it pummeled parts of Franklin this morning @NC5 pic.twitter.com/eYti91IyTZ