+ 0 Tweet
Sixteen people were killed when a severe thunderstorm hit Moscow and the region around the Russian capital on Monday, officials say.
Hundreds of trees were toppled, and about 150 people needed medical help.
It was the deadliest storm in the city for more than 100 years, Russia's Interfax news agency reported.
The winds of up to 110 km/h (70 mph) were described by meteorologists as extremely rare for the city, and caused structural damage to buildings.
Electrical cables were reportedly damaged as Moscow was lashed with high winds, hail and torrential rain.
The city's investigative committee said that "hurricane winds" had blown down trees across the city, killing five pedestrians. 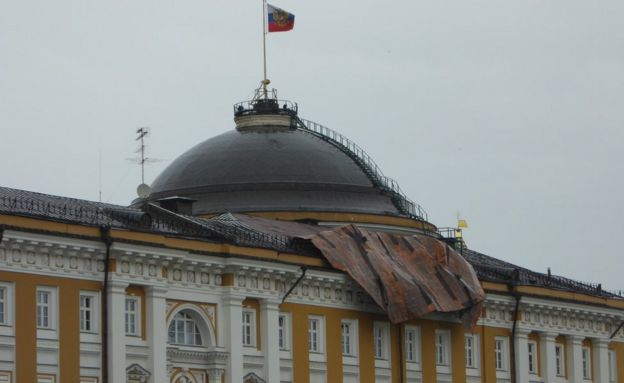 An elderly man was also killed at a bus stop, it said.
Two people were killed after a tree fell onto their summer house, Interfax reported.
On Tuesday, the authorities raised the death toll to 16, saying that 11 people were killed in the capital and five in the Moscow region.
BBC Weather: Forecast for Moscow
Delays had been reported on some metro lines but normal service later resumed.
Tourist Frank Davis, from Newfoundland in Canada, was caught in heavy traffic in Moscow as the "dramatic storm" struck.
"The sky darkened noticeably and the winds were extremely strong.... with debris flying around from all directions," he told the BBC. 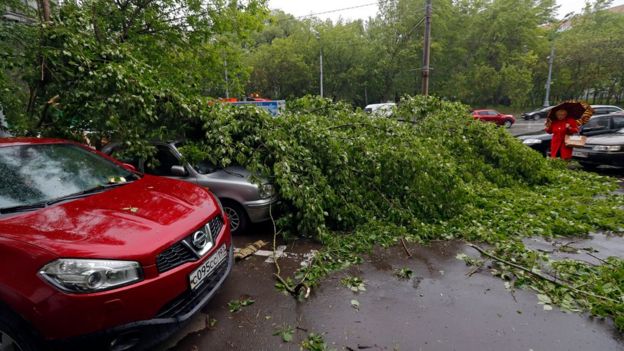 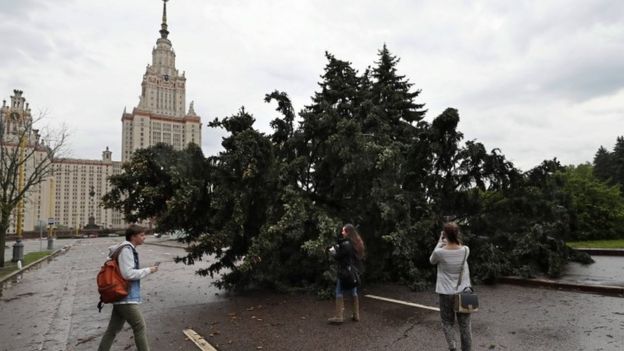 ©EPA
Moscow's Mayor, Sergei Sobyanin tweeted: "My condolences to the friends and family of those killed."
Teams were busy trying to clear fallen trees from the city's streets.
"We reacted quickly and are recovering now," said Gulnara Shakirova, a community service assistant.
"Many good trees, not old ones, were brought down. We are trying to remove all the trees before night falls."
Photos circulating on social media show fallen trees blocking roads and a large roadside advertising board crushing parked cars.
A video also shows strong winds tearing apart the roof of a covered tennis centre in Zhulebino district.
Bron: http://www.bbc.com/news/world-europe-40086616