Hurricane Jose path update: Will Tropical Storm Jose be the next Hurricane Irma?

HURRICANE Irma is bearing down on the Caribbean with the full might of category 5 hurricane, and Tropical Storm Jose now threatens to follow in its path. Will Jose be as devastating as Irma?

Tropical Storm Jose formed over the Atlantic Ocean last night, hot on the heels of Hurricane Irma just as the colossal storm grew in strength to a category 5 hurricane.

Irma is currently battering the Caribbean with life-threatening winds of up to 180mph (289km/h), and now threatenes to strike the Virgin Islands.

Jose is the 10th named tropical storm of the season and has so far reached maximum wind speeds of 70 mph (110 km/h) – nearing the hurricane threshold.

As tropical-storm-force winds extend up to 60 miles (95 km) out from the eye of the storm, NOAA’s National Hurricane Center (NHC) predicts that Jose could reach category 1 hurricane wind speeds by Friday.

Even if Jose reaches hurricane level winds by the end of the week, it will still not be as strong as Hurricane Irma.

The NHC however underlined that at this stage its long-range predictions are full of “large uncertainties”.

On the forecast track, Jose is expected to reach maximum wind speeds of up to 109 mph(175 km/h) with stronger individual gusts.

Conditions are expected to deteriorate over the next 72 hours as the tropical storm picks up in speed. Hurricane Jose: Jose will most likely slow down by the weekendIn its latest discussion notice, the NHC said: :Both satellite and model guidance indicate Jose will continue to exist within a very favorable synoptic regime to support intensification through 72 hours."
Earlier yesterday it also said: "The environment in which Jose is located in appears to be quite conducive for development for the next three days," said the NHC.
"By days four and five, however, the vertical shear may increase in part due to the outflow from Hurricane Irma to its west.

No tropical storm watches or warnings have been issued yet, but the NHC has warned the Leeward Islands to monitor the situation.

The latest NHC predictions pit the tropical storm on a path dangerously close to that of Hurricane Irma, though there is no immediate danger to land.
By 8am EDT (1pm BST) on Friday, Jose should be arriving close to Barbados and then the island of Guadeloupe by Sunday.

It is yet unclear just how close to the Caribbean Islands Jose will come, but the hurricane will most likely just brush the islands before it heads back out into the Atlantic Ocean.

The hurricane will slowdown by the weekend before it shifts course towards the northwest, away from the Caribbean Sea.

Hurricane Irma is meanwhile forecast to slam into the Leeward Islands later today before making its way towards Cuba and Florida. 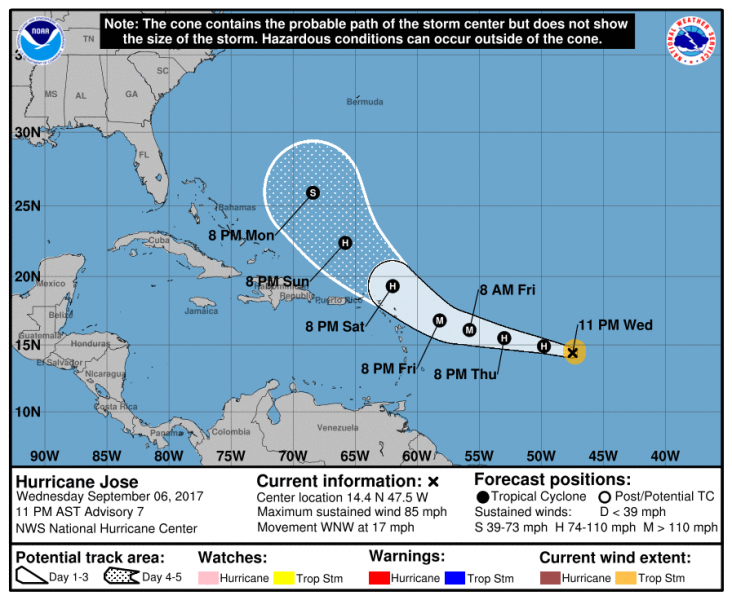 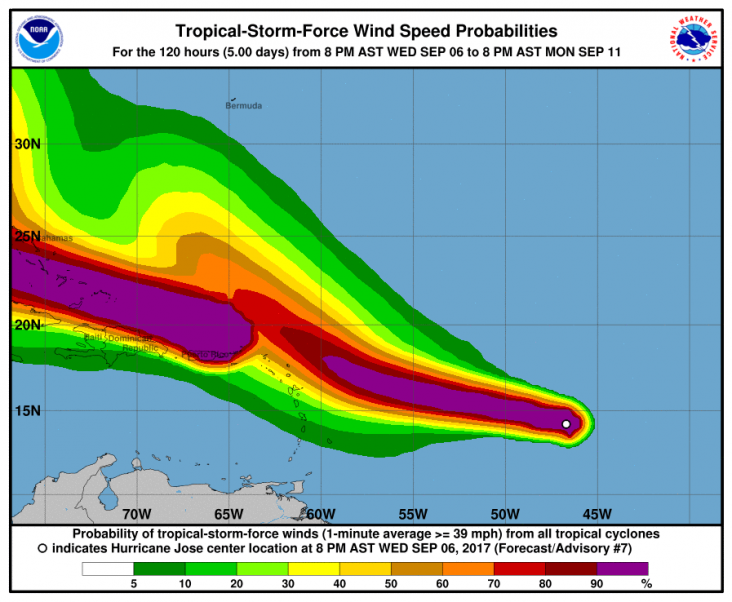 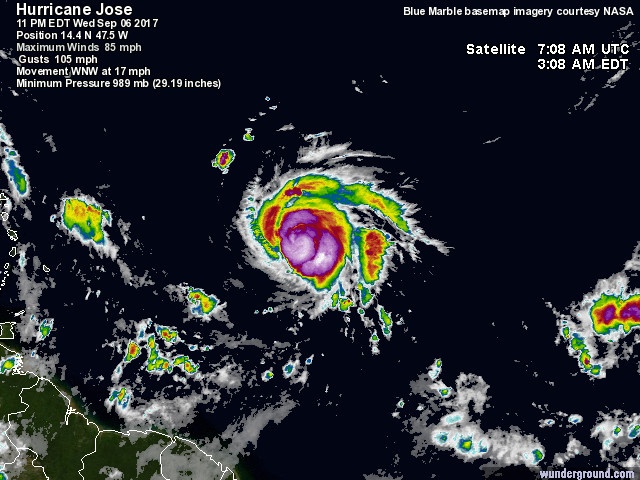 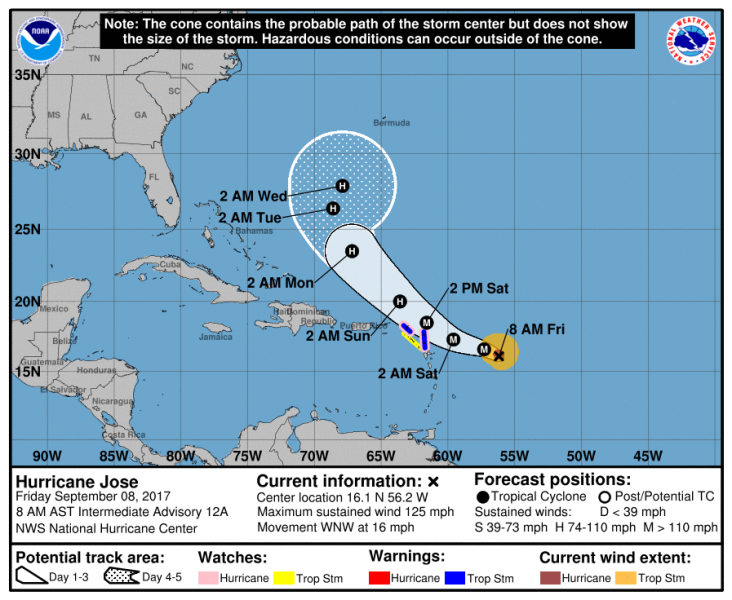 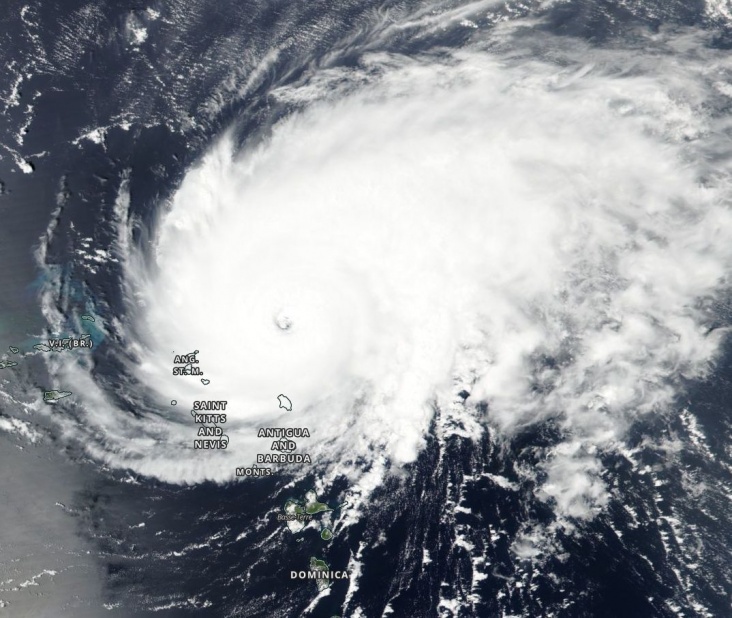 HURRICANE WATCH IN PLACE FOR ANTIGUA AND BARBUDA.
MANDATORY EVACUATION IN PLACE FOR BARBUDA. GOVERNMENT OFFICES WILL CLOSE AT NOON TODAY.

Data from an Air Force Hurricane Hunter plane indicate that the maximum sustained winds in Jose have increased to near 150 mph (240 km/h), making Jose an extremely dangerous category 4 hurricane. This intensity change will be reflected in the upcoming 1100 AM AST (1500 UTC) advisory. 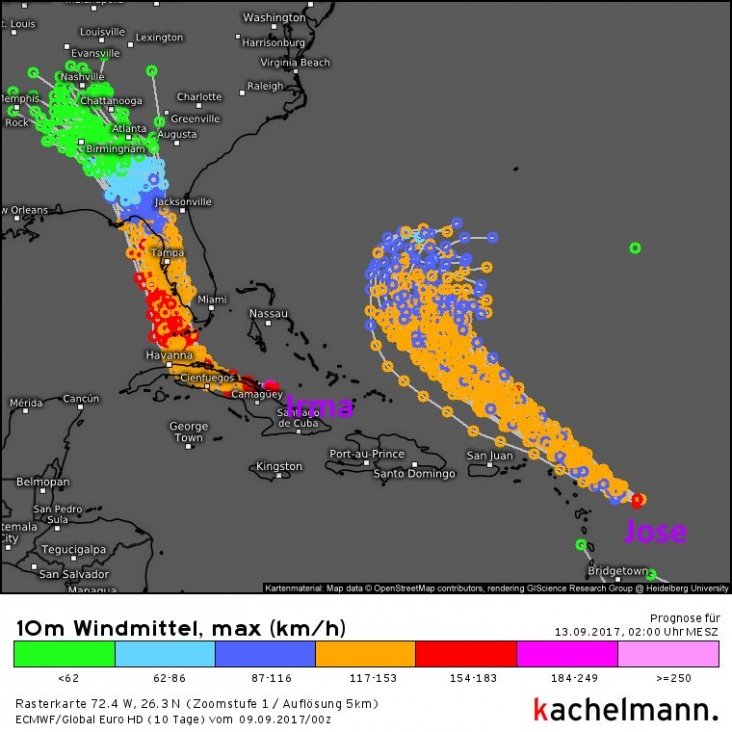 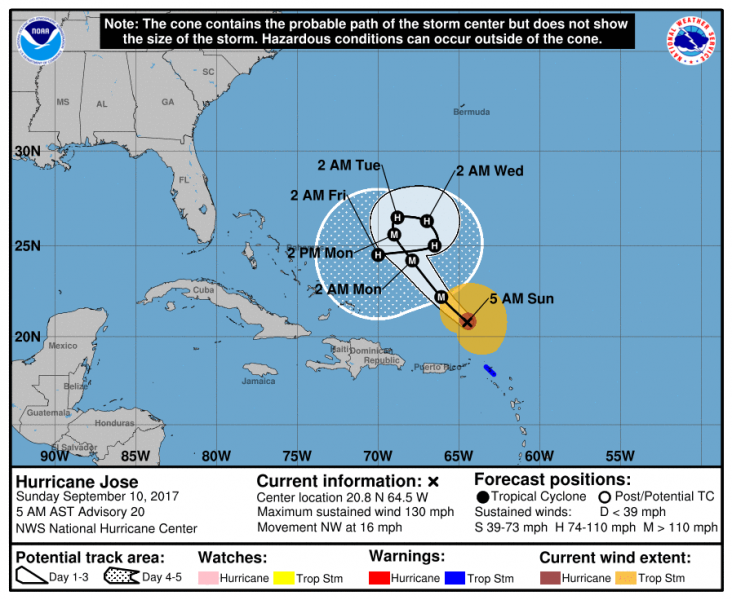 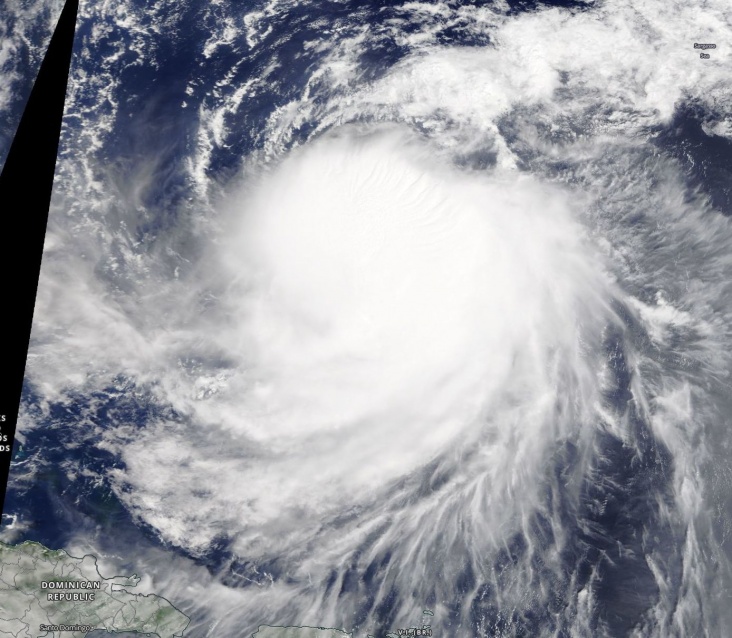 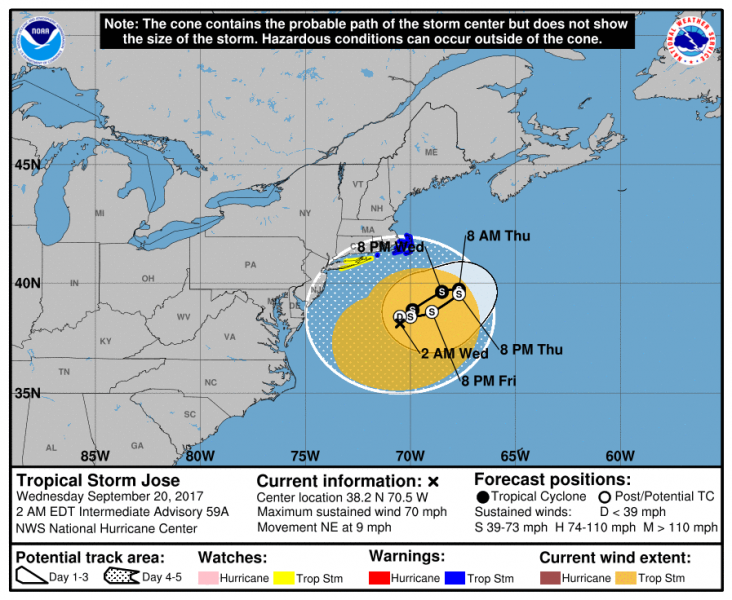