NWS: Severe Thunderstorm Warning uitgegeven voor Ripley, IN; Franklin, IN; Wayne, IN; Union, IN; Fayette, IN.

NWS: Severe Thunderstorm Warning uitgegeven voor Martin, IN; Daviess, IN; Lawrence, IN; Jackson, IN; Monroe, IN; Knox, IN; Bartholomew, IN; Greene, IN; Brown, IN.

NWS: Severe Thunderstorm Warning uitgegeven voor Decatur, IN; Rush, IN; Johnson, IN; Bartholomew, IN; Brown, IN; Jennings, IN; Shelby, IN. 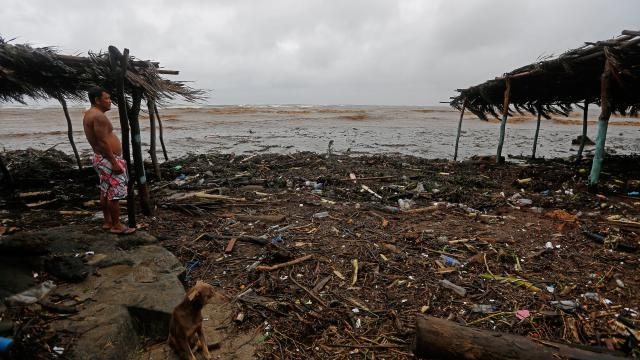 The hurricane models are in tremendous agreement by taking #Nate into SE Louisiana on Sunday. However, watch for minor shifts still. pic.twitter.com/gTc8lZvigX

The latest TS #Nate update shows a possible landfall as a Cat. 1 hurricane on SE LA Sunday at 7 AM. @WWLTV pic.twitter.com/Ck32uKqVcP 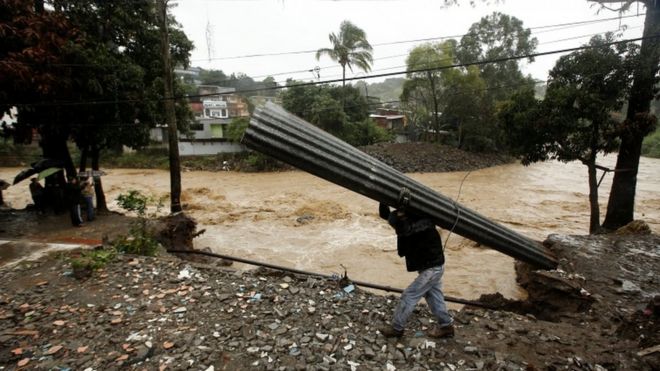 Tropical Storm Nate has killed at least 22 people in Costa Rica, Nicaragua and Honduras before it moves north towards the US.

A state of emergency has been declared in the Central American nations, where more than 20 people are missing.

It has caused heavy rains, landslides and floods which are blocking roads, destroying bridges and damaging houses.

In Costa Rica, nearly 400,000 people are without running water and thousands are sleeping in shelters.

At least eight people have died in the storm there, while another 11 were killed when it moved north and reached Nicaragua, where as much as 15ins (38cm) of rain had been predicted to fall by the US's National Hurricane Center.

Three people have been killed in Honduras, including two youths who drowned in a river, and several are reported missing.
Deze foto is niet meer beschikbaar 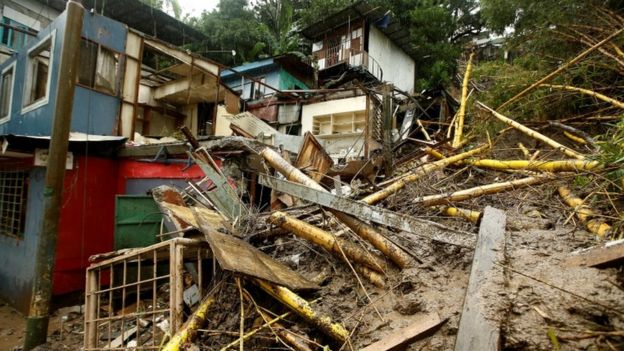 ©Reuters, Some 5,000 people are sleeping in temporary shelters in Costa Rica

One man was also reportedly killed in a mudslide in El Salvador, according to emergency services.

In Costa Rica, all train journeys were suspended and dozens of flights cancelled on Thursday.

More than a dozen national parks popular with tourists have been closed as a precaution.

The storm also caused extensive damage to infrastructure in Nicaragua.

The country's vice-president Rosario Murillo advised people to be cautious in the heavy rains.

"Sometimes we think we think we can cross a river and the hardest thing to understand is that we must wait," he said on state radio.

"It's better to be late than not to get there at all."
Deze foto is niet meer beschikbaar 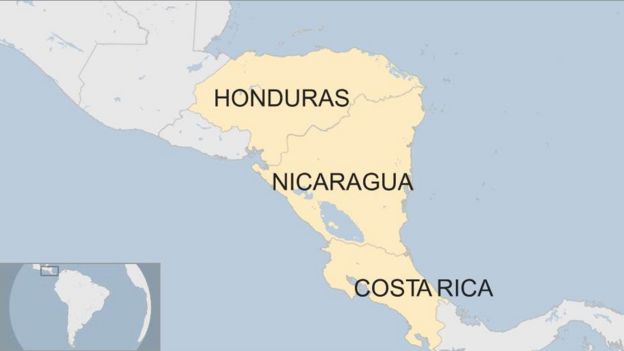 Nate was expected to move off the eastern coast of Honduras at 23:00 ET (03:00 GMT) on Thursday, according to the National Hurricane Center.

Forecasters say the storm will gain strength and become a category one hurricane before it makes landfall on the southern coast of the United States on Sunday.

Residents from Florida to Texas have been told to prepare for the storm, which, if it does strike, might be the third major storm to hit the southern coast his year. 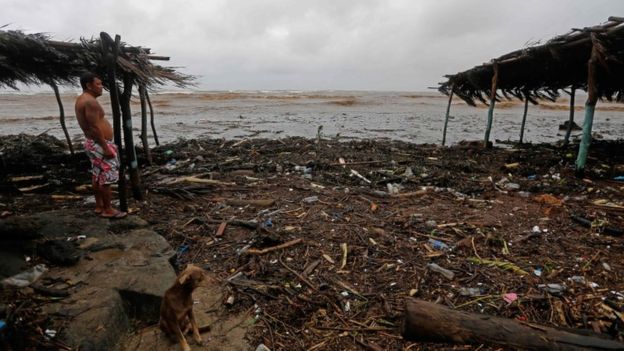 © AFP,Most of the damage in Nicaragua has been along its Caribbean coast

Both Texas and Florida are still recovering from the damage inflicted by Hurricane Harvey, which hit the former in August and caused "unprecedented damage", and Hurricane Irma, which made landfall in Florida in September.

A state of emergency was declared in 29 Florida counties, and in New Orleans in Louisiana.

The mayor of the city told people who live on low-lying ground to evacuate.

"There is no need to panic," Mitch Landrieu tweeted. "Be ready and prepare. Get a plan. Prepare to protect your personal property."

Oil companies operating in the Gulf of Mexico says they are evacuating staff from platforms which lie along the predicted path of the storm.
Bron: http://www.bbc.com/news/world-latin-america-41520672

Moist! Arrived in #costarica just in time for the tropical storm. pic.twitter.com/tmJSjFS6Li

After tropical depression 16 formed in the southwestern Caribbean Sea it continued organizing and strengthening. The Global Precipitation Measurement mission or GPM core satellite flew over the depression and found heavy rainfall. As the depression strengthened into Tropical Storm Nate, that heavy rainfall is expected to occur over a wide area, including locations well away from the center along the Pacific coast of Central America through Friday night, Oct. 6. 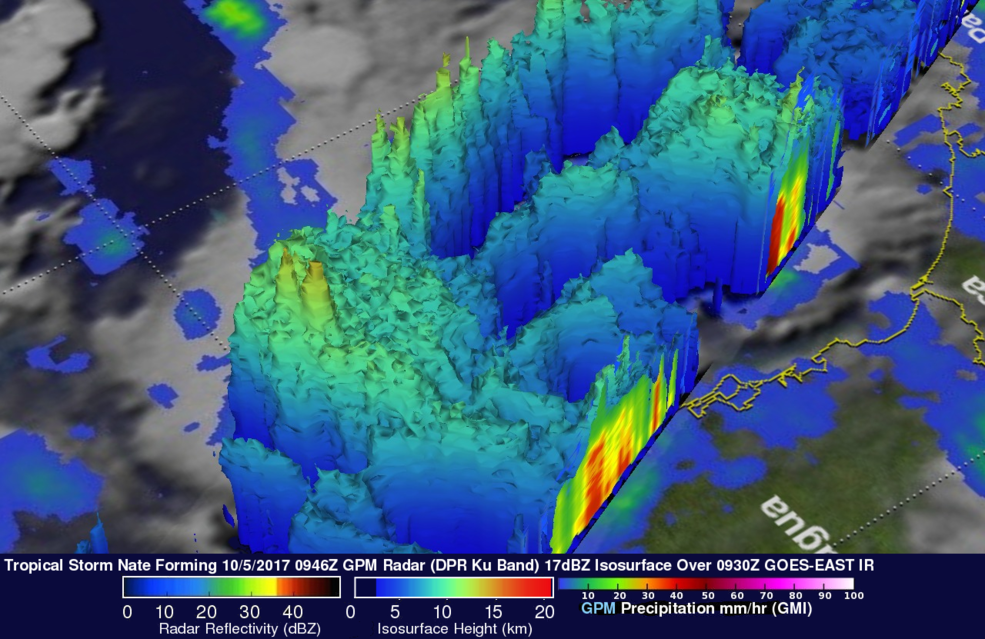 The GPM core observatory satellite passed above Tropical Depression 16 (forming tropical storm Nate) on Oct. 5, 2017 at 5:46 a.m. EDT (0946 UTC). At that time, Tropical Depression 16 (TD16) was located in the western Caribbean near the coast of Nicaragua with winds of about 34.5 mph (30 knots). Data received by GPM's Microwave Imager (GMI) and Dual-Frequency Precipitation Radar (DPR) showed bands of rain producing heavy rainfall East of TD16's center of circulation. Downpours in the Caribbean Sea East of Nicaragua were measured by GPM's Radar (DPR Ku Band) dropping rain at a rate of over 6.4 inches (162 mm) per hour.

At NASA's Goddard Space Flight Center in Greenbelt, Maryland a close-up 3-D cross section view (looking toward the southeast) was created that showed rainfall structure near TD16's center. It was created using data that was captured when the GPM satellite's radar (DPR Ku band) scanned precipitation in the center of the tropical cyclone. Storm tops within powerful convective storms located in rain bands in the northeastern semicircle of TD16 were shown by DPR reaching heights of 9.3 mile (15 km). GPM is co-managed by NASA and the Japan Aerospace Exploration Agency.


On Oct. 5 the GPM core satellite found some of Tropical Depression 16's thunderstorms located over the Caribbean Sea East of Nicaragua were dropping rain at a rate of over 6.4 inches (162 mm) per hour. GPM showed storm tops within powerful convective storms located in rain bands in the northeastern semicircle of TD16 were reaching heights of 9.3 mile (15 km).
Credits: NASA/JAXA, Hal Pierce

Nate was moving toward the northwest near 9 mph (15 kph).  NHC said a turn toward the north-northwest at a faster forward speed is expected later today, with that motion continuing through Friday night.  On the forecast track, the center of Nate should move across northeastern Nicaragua and eastern Honduras today and then over the northwestern Caribbean Sea tonight and Friday. The center is expected to approach the coast of the Yucatan Peninsula late Friday.

Maximum sustained winds are near 40 mph (65 kph) with higher gusts. Little change in strength is expected today while the center is over land.  Strengthening is likely once the center moves over the northwestern Caribbean Sea tonight and Friday, Oct. 6.

The estimated minimum central pressure is 999 millibars. The National Hurricane Center (NHC) indicates that the tropical cyclone's future intensity is uncertain over the next couple days due to interaction with the coasts of Nicaragua, Honduras and then the Yucatan Peninsula.

The tropical cyclone is forecast to strengthen as it moves over the Gulf of Mexico and could threaten the northern Gulf Coast as a category one hurricane this weekend. A recent NHC forecast track indicated that the possible hurricane would most affect coastal areas from Louisiana through the Florida panhandle. 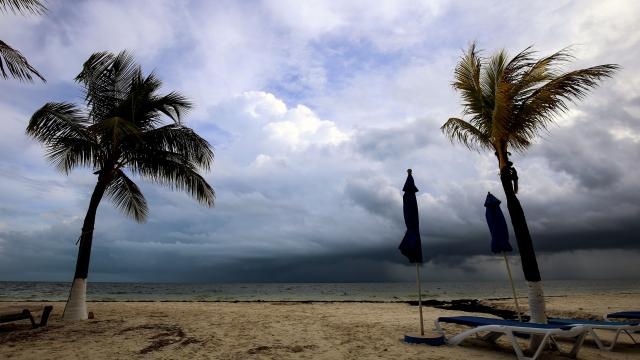 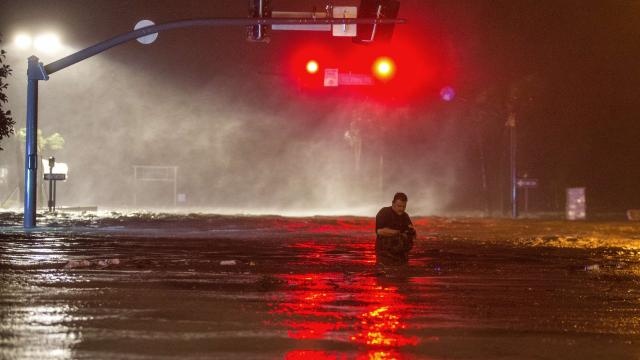