The other landed in West Palm Beach at Forest Hill Boulevard and Interstate 95, with winds estimated to be 75 to 80 mph.

The blustery gales downed a number of power lines, leaving nearly a quarter of a million people without electricity

And several mobile homes in Boynton Beach were also damaged in the storm as it hit on Saturday, with fire crews called to reports of damaged homes inside Parry Trailer Village.
High levels of rain continued across the region on Sunday as the storm merged with a low pressure system from the Great Lakes.

The storm formed near western Cuba a few days ago, according to the National Hurricane Centre.

By Sunday, Storm Philipe was racing up the Atlantic Ocean off the East Coast, moving away from Florida at about 31 mph, with sustained winds of about 50 mph.

And it is expected to track up the east coast, producing high wind and rain for parts of eastern New York and New England late Sunday into Monday. 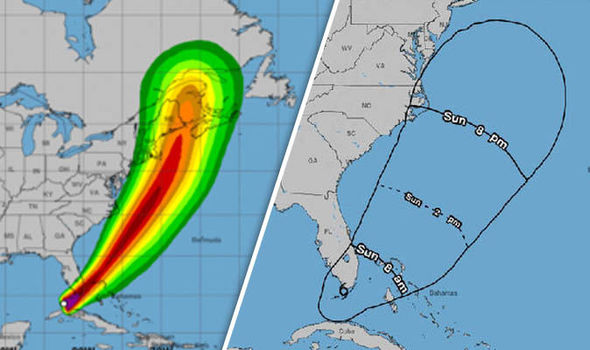 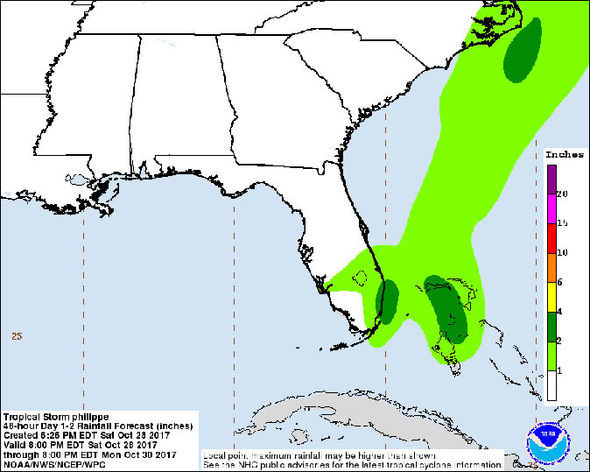 Tropical Storm Philippe is currently accelerating away from Florida, according to the NOAA’s latest update.

Wind speeds have picked up to 50mph and the storm is now moving northeast at 32mph.

The NOAA’s 8am advisory warned that Philippe is still producing tropical storm conditions across the northwestern Bahamas.

Maximum sustained winds have increased to near 50 mph (85 km/h) with higher gusts,” the NOAA said.

“Some additional slight strengthening is forecast during the next day or so.

“However, Philippe is expected to become a post-tropical cyclone by tonight, and be absorbed by an extratropical low on Monday.” 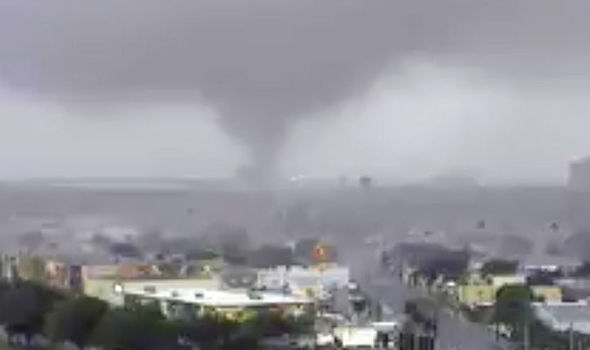 ©CNN
About 45 million people in the Northeast are currently under a Flash Flood Watch as the storm is expected to drench parts of the US with average rainfall totals of four to six inches.
Up to 10 inches is also expected in isolated areas of the Northeast and New England.c

CNN meteorologist Karen Maginnis said: ”This is not going to be the equivalent of Sandy.

“We would hardly see that or expect anything like that, but we are expecting very some very gusty winds, heavy downpours, considerable power outages.”
Bron: http://www.express.co.uk/news/weather/872958/tropical-storm-philippe-2017-tornado-Florida-New-York-track-path-hurricane-NOAA-NHC

Maturing October cyclone feeding off #Phillipe which still has some bubbling near its center offshore = hell of an eastern New England Gale! pic.twitter.com/kqUWFYlN4H

4:00AM #PowerOutage update for New England:

1 Million+ #PowerOutages along the #EastCoast due to a large #Weather system. #PowerOutage counts continue to rise. https://t.co/8cAFt3zGJe pic.twitter.com/6i4VFFZPvN

#poweroutage @GoodspeedMusicl reading short stories and playing board games by candlelight. I Love this family. pic.twitter.com/14ZgqUPb1F

600,000 left in the dark after storm strikes on Sandy anniversary https://t.co/479oiXmJnx via @nbcnews #TropicalStorm #Phillipe #weather

Soggy weather dude @KeithCarson getting it done this morning. Those rain pants don’t look smedium to me though... pic.twitter.com/YqX09AiAer

[720am] Here are the peak wind gusts from the past 24 hours. pic.twitter.com/bAih8Q20WY

Pretty low pressure (972mb) for an October storm north of the border now. #Philippe leftovers screaming up through downeast ME. pic.twitter.com/eZNyK28lqJ

Reports of debris and flooded roadways are widespread across #Massachusetts. #WBZ cameras caught this scene in Brookline. pic.twitter.com/tRW57v8kqi

Winds gusting to 130 mph from near the top of the tower! #highwinds #exciting #nhwx #newx pic.twitter.com/al2rOvttbZ

It’s a one-way street but I’ll be going the other way. #RI #poweroutage #Elmhurst pic.twitter.com/fPefARDUZd

Wires down in Danvers on fire near Danvers Square one of many wind incidents. #wcvb #boston pic.twitter.com/NCuXiRps3R

Wires, trees down all over Russet Rd in #Brookline pic.twitter.com/fR22pL46h9

Emergency crews are out all over working to clear roads and restore power after the storm.
Here's #Brookline.
Watch @boston25@jessicamreyes pic.twitter.com/6NDfIfyldz

Tree into house on Russett St in #Brookline. Reports all AM @boston25 pic.twitter.com/c2ipK1imio

Beware of ponding on the roads this morning. In Lowell, crews were out trying to clear drains @boston25 pic.twitter.com/wflIpyLJIe

Check our closings and delays list before leaving your house this morning! https://t.co/ZMHcwqsOln

This is what 26-foot seas looks like hitting Monhegan Island. I could feel the spray a quarter mile away. Not kidding. #Maine pic.twitter.com/oSK5ngYpH7