The Indian Medical Association declared a public health emergency on Tuesday, November 7, 2017, as toxic smog engulfed Indian capital Delhi. In some areas, Air Quality Index (AQI) reached a maximum of 999 and went beyond what instruments could measure.

According to Central Pollution Control Board (CPCB), the smoke-laden air from Punjab and Haryana, and moisture-heavy winds from the eastern region had combined with local pollutants to trigger the extreme situation.

"This is a public health emergency, so everyone should stay indoors, no jogging, running or walking outside," said Dr. Krishan Kumar Aggarwal, the head of the Indian Medical Association (IMA).

On Tuesday morning, the US embassy air pollution tracker said levels of PM2.5, tiny particulate matter that enters deep into the lungs and bloodstream, reached 703, which is double the mark of 300 that authorities deem as hazardous. "This is like a heavy rain of PM 2.5. In heavy rain, you don't venture out," Aggarwal said.

The Delhi chief minister, Arvind Kejriwal, said on Twitter the city was a 'gas chamber,' and called for a meeting on Tuesday afternoon to consider a response to the crisis. "Every year this happens during this part of year. We have to find a solution to crop burning in adjoining states," he said referring to smoke caused by the burning of crops in the northern Indian states near Delhi.

Primary schools, already asked to keep students indoors, will be shut on Wednesday and longer if the poor conditions persist. The District Magistrate of Ghaziabad has also directed all schools in the region to remain closed on Wednesday and Thursday.
The Prevention and Control Authority recommended the government to quadruple parking charges in Delhi-NCR, slash metro fares during off-peak hours, close brick kilns, hot mix plants and stone crushers across the region until further notice, and strengthen public transport in Delhi, Uttar Pradesh, Rajasthan and Haryana by introducing more busses. In addition, the board recommended a fine of Rs 50 000 on road construction agencies violating dust pollution norms in Delhi-NCR.

According to local media reports, crop stubble was burned in 640 locations across neighboring Haryana state on Monday and the CPCB said it is not likely the burning will subside before November 15.
Haryana Environment Minister Vipul Goyal said that in view of the orders given by the Supreme Court and the National Green Tribunal, the Environment Department has taken a tough stance on cases of stubble burning and fined over 1 000 farmers.

"Given the air pollution from stubble burning, the Pollution Control Board has started a statewide campaign and identified 1 011 farmers for burning stubble across the state. The department has filed police cases as well as imposed fines on them," he said.

The CPCB also recorded 'severe' air quality in the neighboring Noida and Ghaziabad.

The last time air in Delhi turned 'severe' was on October 20, a day after Diwali festivities, when firecrackers were set off.

You can check IN anytime you like, but you can never leave #Delhi pic.twitter.com/YPKEPlDHAo

Can someone tell me if this is real? Car crash, car pileup due to smoke and low visibility? #Delhi #delhipollution pic.twitter.com/Rcju2bH4ti

How Much Can A Mask Protect You From #Delhi's 'Hazardous' Air?#smogindelhihttps://t.co/qFyQB1s6Kp pic.twitter.com/PS30SmTFls

This morning the Lodhi Road AQI reader has maxed out at 500. We had a hand held PM 2.5 reader that clocked 1119 #Delhi #Pollution pic.twitter.com/2BOtvdts0I

#Delhi has turned into fifty shades of grey & is getting grey-er by the day. Not a good news at all! India’s capital city will take your breath away! #smogindelhi #DelhiChokes pic.twitter.com/PXYLpBFymT

What’s happening in #Delhi is dangerous in more ways than one can imagine..#smogindelhi.. pic.twitter.com/PSTHcymzkz 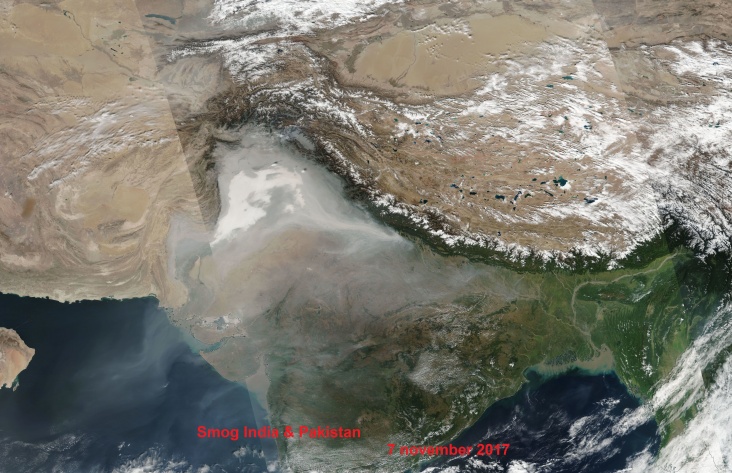