A HUGE 6.5 magnitude earthquake has struck off the coast of Costa Rica, according to the US Geological Survey (USGS). 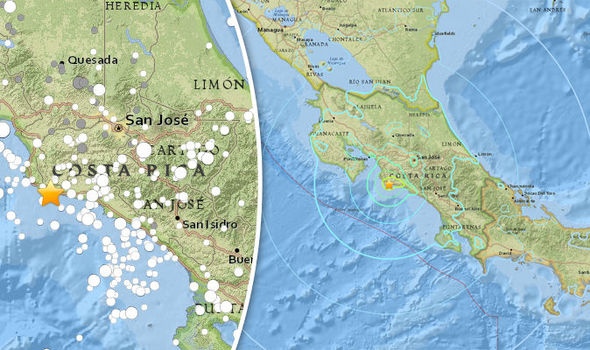 Costa Rica is located on the Ring of Fire, faults lines in the Earth’s crust around the Pacific Ocean, which is a hotspot for earthquake activity.

One Twitter user wrote: “WOW a 6.8 magnitude Earthquake in Costa Rica. The House was SHAKING!”

According to the US-based National Weather Service’s Tsunami Warning System there is no alert in place for neighbouring America territories Guam, Tinian or Saipan.

It is unclear if there are any warnings in place for Costa Rica.
The USGS initially recorded the quake at a 6.8 magnitude but it has since been downgraded 6.5.

He also urged residents to remain calm and to be prepared for any possible aftershocks.

Otto Vargas, a university professor in San Jose who was at home with his family, said: ”We're very scared. It's been years since we felt such a strong one.”

The quake hit in a rural area near the popular beach tourism city of Jaco, where there are few tall buildings. It did not trigger a tsunami threat in the Pacific.

Hotels and Restaurant where we're eating shook...power loss. Between the ocean/beach and buildings. Waiting for aftershocks to pass before entering hotel rooftop. #costarica #jaco