A strong and shallow earthquake registered by CENC (China) as M6.9 hit Milein County, Nyingchi City, Tibet (SW China / India border region) at 22:34 UTC on November 17, 2017 (06:34 local time, November 18). Both USGS and EMSC report it as M6.3 at a depth of 10 km (6.2 miles). USGS issued a green alert for shaking-related fatalities and yellow for economic losses.

Professor Max Wyss, who specializes in theoretical prognoses of injuries and fatalities expects 0 to 100 fatalities and 100 to 800 injuries, according to Earthquake Report.

The USGS issued a green alert for shaking-related fatalities. There is a low likelihood of casualties.

A yellow alert was issued for economic losses. Some damage is possible and the impact should be relatively localized. Estimated economic losses are less than 1% of GDP of China. Past events with this alert level have required a local or regional level response.

Overall, the population in this region resides in structures that are vulnerable to earthquake shaking, though resistant structures exist. The predominant vulnerable building types are adobe block with wood and rubble/field stone masonry construction.
Bron: https://watchers.news/2017/11/18/tibet-india-region-earthquake-november-17-2017/ 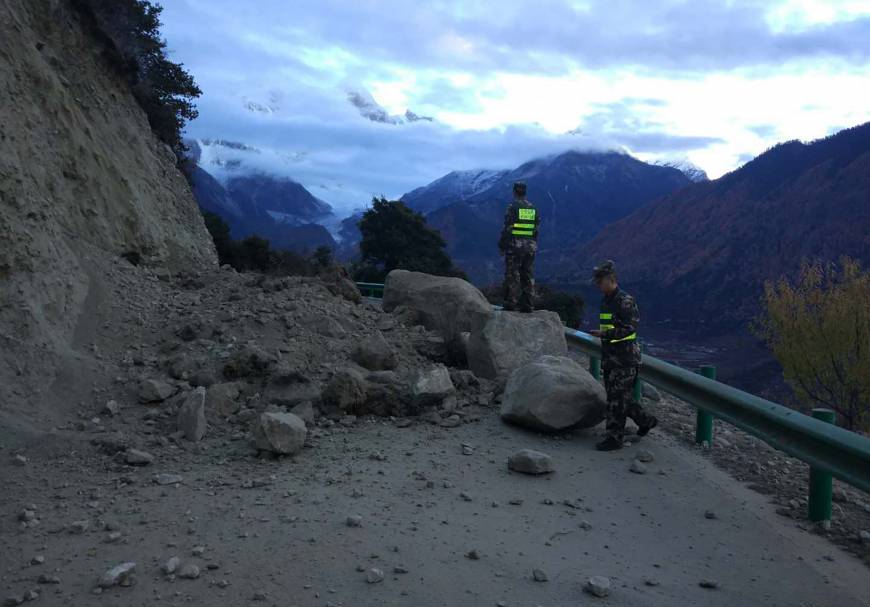 Rescuers look at a road blocked by fallen rocks near the town of Paizhen in southwestern China's Tibet Autonomous Region on Saturday after a strong earthquake shook the area. | AP

BEIJING – An earthquake of magnitude 6.3 struck a remote part of Tibet on Saturday, the United States Geological Survey said. There were no immediate reports of significant damage or injuries.

It struck in the Nyingchi region of Tibet. The Nyingchi government said in a statement on its microblog that the quake’s epicenter was in an uninhabited region and that the government had yet to receive any casualty reports.

China’s Xinhua News Agency said the earthquake caused power outages and damage in villages near Nyingchi and emergency response staffers had been mobilized to investigate.

The epicenter was within 250 km of the Indian towns of Along, Pasighat and Tezu, the USGS added.

A magnitude 6.3 quake is considered strong and is capable of causing severe damage.