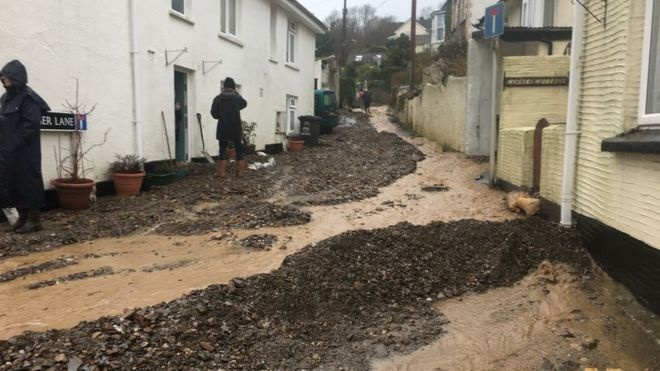 A number of properties have been evacuated and people are being urged "not to travel" as bad weather hits the south-west of England. Devon and Cornwall Police said heavy rainfall had caused landslides, flooding and road damage. Officers said homes in Barnstaple had been evacuated, but there have been no casualties.

The Met Office has issued a weather warning for the region, which says the rain will "die out" on Sunday evening. The Environment Agency said "immediate action" was required in parts of north Devon this morning as the levels of the rivers Bray and Mole rose. Devon County Council also reported that the River Venn had burst its banks in Barnstaple. 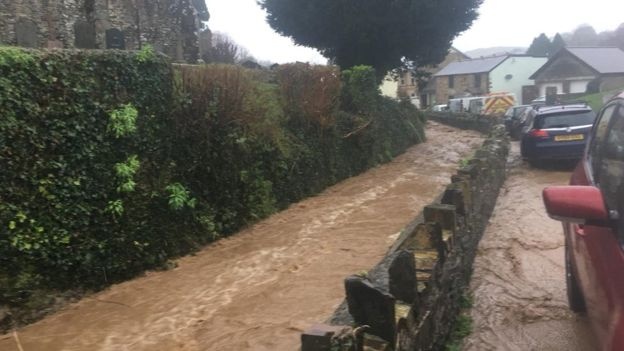 Hugh Griffiths, from council's control room, described the situation as "a moving picture". "We've got a lot of roads affected in north Devon, with some properties which have been flooded. "There's also landslips and debris washing over gullies." The A399 at Combe Martin was closed after a landslide which caused a section of the road to collapse at about 10:35 GMT, police said.

Muddiford resident Darren Knill said the water "just kept rising" causing "chaos" in the area. "I reckon it was up to about 1.5m (4.9 feet). I haven't seen anything like it since I was a kid."

The stream in Muddiford also burst its banks. Steve Isaacs, from Devon and Somerset Fire and Rescue, said it had "created its own flow through people's gardens and into peoples houses". A police spokesman said: "We would urge any member of the public to avoid travelling into or around the area unless the journey is critical. "If anyone has to travel they should take care while driving in the area due to large amounts of surface water and debris, and are urged to slow down."

Despite weather reports suggesting heavy rainfall easing overnight, the public has been asked to "remain on alert" for more widespread flooding.


The rain is heavy, it is dark, there is debris on the road. Please do not travel, stay home & monitor the issues. @DC_Police @DevonAlert pic.twitter.com/WgFl4gYuHV