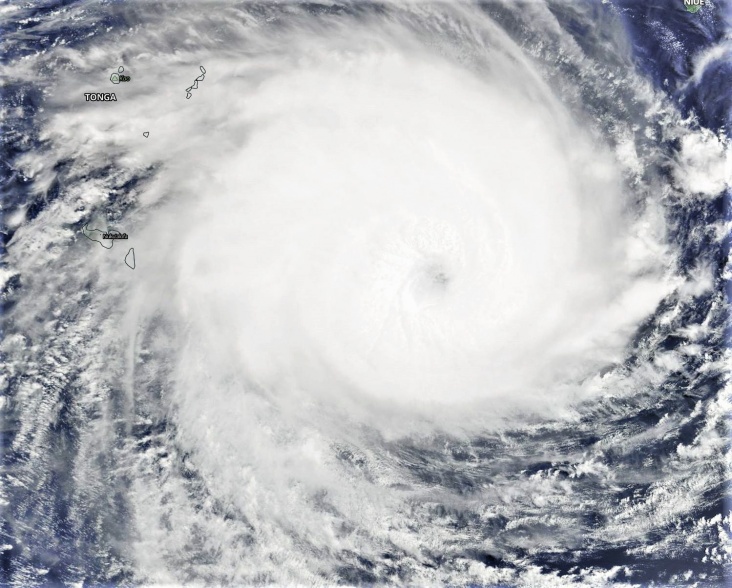 7.30am my street is getting a... make over. Chainsaws and machetes are already out and at work. My neighbours are not wasting time#Gita #CycloneGita #tonga pic.twitter.com/2wN2kBZspY

#Samoa Red Cross volunteers are getting out into communities hit by Cyclone #Gita to understand what help people need. They are also delivering communal tanks for areas that need water. pic.twitter.com/oKEZ7v2gNZ

American Samoa is a part of the @SDICRedCross Region and three SD-based volunteers are getting a briefing on American Samoa this morning as they prepare to deploy to respond to Cyclone #Gita for damage assessment. 200+ homes damaged, Red Cross is there to help affected families. pic.twitter.com/l7T52fZIXP

Our thoughts are with those affected by cyclone Gita currently in #Tonga #gita #Samoa Our Headquarters in Wiltshire is keeping abreast of developments #CycloneGita #disasterrelief #International pic.twitter.com/HEmwa9n43h

Thank you @POTUS @realDonaldTrump for issuing a disaster declaration for #AmericanSamoa after Tropical Storm #Gita. This will help residents and businesses in the U.S. territory rebuild @ASIIADomenech pic.twitter.com/wMGslisHti

More pics from the aftermath of #Gita in Samoa pic.twitter.com/OtoqpTtzki

7.30am my street is getting a... make over. Chainsaws and machetes are already out and at work. My neighbours are not wasting time#Gita #CycloneGita #tonga pic.twitter.com/2wN2kBZspY

More pics from the aftermath of #Gita in Samoa pic.twitter.com/OtoqpTtzki

Thanking the Lord that my family is safe and the family home is still standing. For everyone who hasn't been as fortunate, my thoughts and prayers are with you during this difficult time ???? #GITA pic.twitter.com/rf8IIUxu0O

Our thoughts and prayers with #Tonga, #Samoa and now #Fiji devastated by #CycloneGita. We are working with local partners and churches to find the best way to help the most vulnerable people. You can donate: https://t.co/VVtIZIIJCj pic.twitter.com/hxCmgcVEDm

Our thoughts are with those affected by cyclone Gita currently in #Tonga #gita #Samoa Our Headquarters in Wiltshire is keeping abreast of developments #CycloneGita #disasterrelief #International pic.twitter.com/HEmwa9n43h

Pics just in from the #Samoa Red Cross team who are assessing the damage from Cyclone #Gita to understand impact & needs. #TCGita pic.twitter.com/7djYKLx7sA

#YourADF is assisting with the Aus response to #TCGita & with supplies transported to #Tonga via a #RAAF Globemaster pic.twitter.com/I4X6GiqRee

What’s left of the front part of my Aunty’s house. Roof & veranda completely gone. So many happy memories hanging out there as a kid eating guava and mangoes. We are lucky. She has money to rebuild, whereas so many others back home don’t. #CycloneGita #tonga pic.twitter.com/TOzPokL4o9 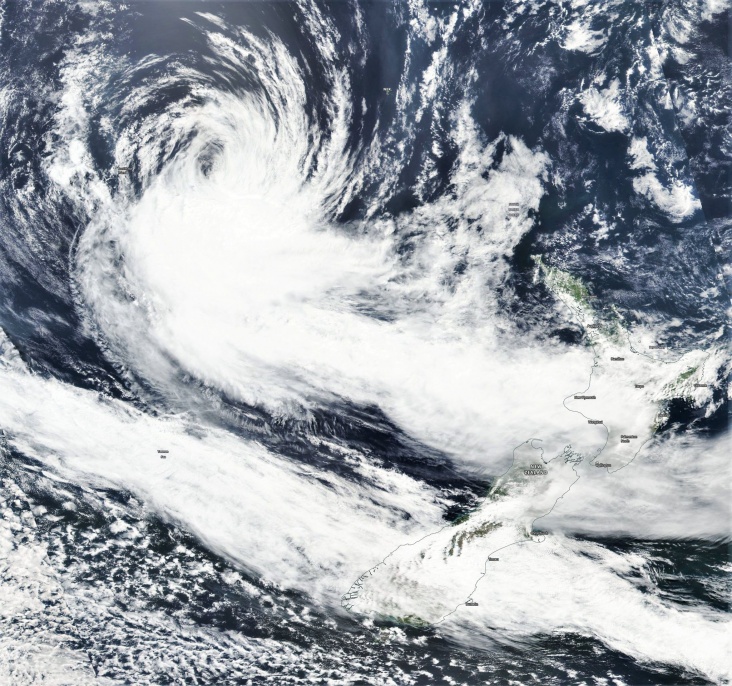 Gita remains on track to slam into New Zealand with heavy rain and strong winds around Tuesday. Gita will remain past its peak intensity and have transitioned to a non-tropical storm when it barrels across New Zealand. However, residents should not let their guard down.

"Gita will still be a powerful storm as it accelerates toward New Zealand," AccuWeather Meteorologist Jake Sojda said, "and will bring damaging winds and flooding rain to parts of the nation Tuesday into Tuesday night, local time." Flash flooding, widespread tree damage and sporadic power outages may result. The strong winds will also stir up rough seas, creating dangerous conditions for boaters. 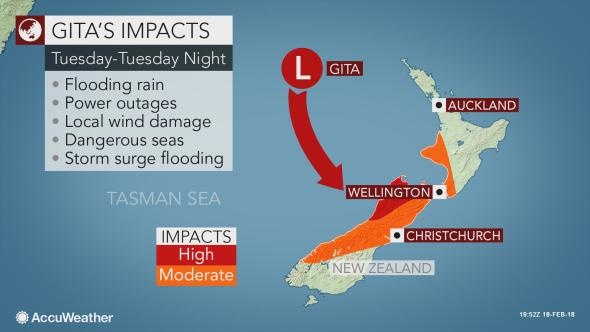 Travel and daily routines can be impacted in Wellington and Christchurch. Latest indications are that Gita will make a landfall on the northwest coast of South Island. Travelers should prepare for disruptions, including flight and bus cancellations. Officials may be forced to close schools.

Although a landfall is expected on South Island, communities on North Island such as Wellington can expect to see some rain and wind. With this track, the threat for heaviest rain and dangerous flash flooding would be focused on the upper South Island, especially in the northern ranges of the South Island. Westport could be a hard-hit community with wind gusts strong enough to down trees and cause some damage. Landslips will also become a significant concern in the higher terrain. 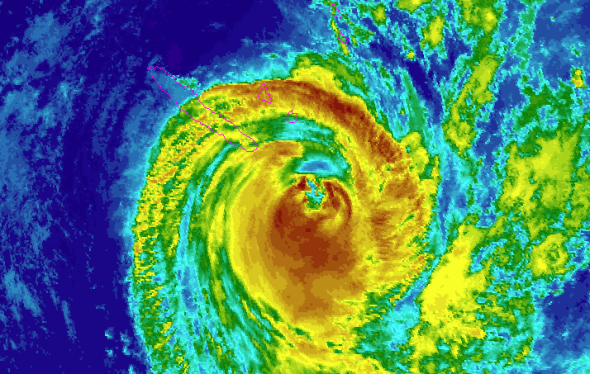 Gita was a severe tropical cyclone (the equivalent of a hurricane in the Atlantic or eastern Pacific oceans) when it passed south of New Caledonia on Friday night. Bron afbeelding: NOAA

"The northern ranges of the South Island will be more susceptible to flooding and slips with heavy rain early this weekend preceding Gita," Sojda said.
"A significant storm surge and coastal flooding will also be a threat along the western coast, to the north of the storm track," Sojda said. While the threat for flooding will not be the highest in Wellington, strong winds will cause seas to build, possibly canceling ferry service on Tuesday.

Residents across New Zealand are urged to continue to monitor the progress of Gita and begin making preparations for possible power outages. Any trees that are weak and could be easily brought down by strong winds can be trimmed. Anyone living in areas prone to flooding and slips should review evacuation plans and be ready to leave at a moment's notice. Residents can also prepare by ensuring storm drains are clear.

Ships traveling to or from New Zealand should consider alternate routes, while other boaters should begin preparations to protect ships currently docked at ports. Gita already left a trail of destruction from American Samoa to Tonga earlier this week. "At its closest approach to Tonga, Gita was equal to a Category 4 hurricane in the Atlantic and east Pacific oceans with sustained winds of 232 km/h (144 mph)," AccuWeather Senior Meteorologist Eric Leister reported.

WELLINGTON (Reuters) - New Zealand’s national carrier on Tuesday canceled all flights in and out of the capital, Wellington, and the southern city of Christchurch declared a state of emergency as the remnants of tropical cyclone Gita pummelled the country.

Even before the storm hit in full force, heavy rains in the center of New Zealand brought floods in Christchurch, prompting a warning from Mayor Lianne Dalziel. “The full impact of the storm will be felt overnight and tomorrow morning,” she said, urging residents of low-lying areas to evacuate. “We are expecting homes to be flooded.”

Air New Zealand said all flights to the capital would be grounded from 2.45 p.m. (0145 GMT) as weather authorities issued warnings of severe weather and heavy rain and gusts of up to 150 kph (93 mph).

Prime Minister Jacinda Ardern said troops had fanned out to areas likely to be the hardest hit and the national Civil Defence office in Wellington was on standby to help. “My message still to people is please look out for your local warnings and expect disruption to travel and please just be careful,” she told reporters at parliament.

Cyclone Gita hit the Pacific island nations of Fiji and Tonga last week, packing winds up to 275 kph (171 mph). Fiji escaped major damage but Tonga suffered widespread destruction and flooding. Earlier, the storm had caused extensive damage in Samoa and American Samoa. The cyclone had since been downgraded to a storm, but forecasters said it was still likely to wreak havoc on Tuesday evening as it traversed the center of New Zealand.

Parts of the country are still reeling from a huge storm that prompted authorities to declare states of emergency at the beginning of February. More than 40 schools and preschools shut in the upper South Island, while mayors urged people to stay home.

Transport authorities shut a stretch of highway along the east coast of the South Island and the Department of Conservation was closing seaside hiking tracks and campsites along the West Coast and ushering tourists away from low-lying areas, media said.

Good thing Westland Milk Products and @DairyNZ decided to postpone tonight’s M Bovis briefing with MPI - new date to be confirmed. #CycloneGita taking the roof off the venue @ktmilne6 be safe out there people! pic.twitter.com/Ofbc0e6eb2

Pic from around Coastal Taranaki from my cousin ???? #CycloneGita pic.twitter.com/JyygcZPu3A