Winterstorm Oliver trekt over de VS

Winterstorm Oliver trekt over de VS

Winter Storm #Oliver is moving into the Midwest today bringing #snow and ice. @JanelKlein is live from #Duluth where they could see 5-8” of snow. pic.twitter.com/7mX9knf1Sb 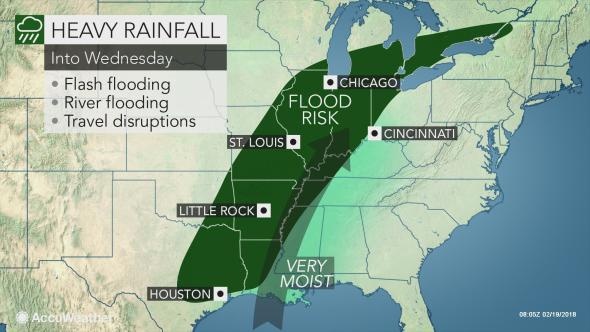 Excessive rainfall outlooks from @NWSWPC for next 3 days suggest flooding. At first parts of the AR.OK.TX and MO will take some of the rain, but eventually mainstem rivers fill to capacity and flood. In other words areas currently in drought are buying time. pic.twitter.com/4tqXtDcguK

Nice spread across the great state of OK this morning including a 20 degree spread across OKC via @okmesonet
Tons of THUNDER FREEZING RAIN in northern OK. Wichita, KS it's coming your way! pic.twitter.com/z72LyzFRnD

Quite the seasonal shift this morning across the Midwest as the front bears down on #Chicago
Single digits and snow in Sioux Falls versus 70 in St. Louis with thunderstorms around. That's only 7 degrees away from St. Louis RECORD HIGH for the day. pic.twitter.com/GFIM2YDf8G

40M ppl are under #flood watches. The #KankakeeRiver in IN is expected to see record flooding. Parts of the #OhioRiver are seeing the highest flooding since the late 90’s. AMHQ is keeping you updated now until 9aET. pic.twitter.com/WBw2gqrA4i

A swath of ice will trigger significant travel disruptions across the Midwest and may leave some residents in the dark through Tuesday night.While May-like warmth builds across the East, the storm track will allow more wintry precipitation to sweep across the Midwest following the heavy snow that fell over the Rockies and northern Plains on Sunday and Monday.

The ice will separate snow to the north from the rain threatening to cause flooding from the southern Plains to the lower Great Lakes. Sleet and freezing rain was accompanied by thunder and lightning in northern Kansas, southeastern Nebraska and south-central Iowa, including Des Moines, on Monday night. Roads and sidewalks quickly developed a layer of ice as temperatures were in the 20s Fahrenheit.

As colder air catches up with the back edge of the rain stretching from Texas to Michigan, the icy conditions will spread into more populated areas through Tuesday night. Ice accumulations may exceed 0.20 of an inch in some areas. On Tuesday, an icy mix will extend from eastern Kansas to Iowa, Wisconsin, including Green Bay, the Upper Peninsula of Michigan and into southern Ontario.

Rain is likely to transition to a mixture of sleet and/or freezing rain in Springfield and St. Louis, Missouri, and Chicago and Peoria, Illinois, during Tuesday night. Those heading to work and school on Wednesday morning could face icy patches on roads and sidewalks. School delays are possible. There is a chance for the northern suburbs of Detroit to experience a changeover to ice and slick conditions early Wednesday morning. Icy conditions may develop as far to the southeast as the Ozark Mountains.

“Any ice will make roads and sidewalks extremely slippery, but there is concern for enough ice buildup for isolated power outages,” AccuWeather Meteorologist Steve Travis said. Weak tree branches may also succumb to the weight of the ice. Due to the springlike warmth preceding this winter storm, bridges, overpasses and other elevated surfaces would be the first to turn icy as temperatures drop.

Even where the rain ends before temperatures drop below freezing, any standing water can eventually turn to ice as the colder air rushes in. The cold plunging back into the North Central states will hold highs to the 30s F in Chicago and St. Louis on Wednesday, just a day after springlike warmth. Another storm may sweep back northward later in the week and return more snow and ice to the nation's midsection.

Roads are starting to get slick in Hastings. Slow it down and put your seatbelt on! #traffic #Weather #RoadSafety #buckleup pic.twitter.com/RrsOkmLU56

The risk of urban and small stream flooding will continue while multiple rivers are already at or projected to reach major flood stage in the central United States over the next several days. In less than 48 hours, from Monday to Wednesday, more than a month's worth of rain fell on some locations from Texas to Michigan. Additional rain will fall on areas from the southern Plains to the lower Great Lakes and Appalachians into this weekend. The combination of melting snow, frozen ground and drenching rainfall into Monday has pushed the secondary waterways in Illinois, Indiana, the Lower Peninsula of Michigan and northwestern Ohio well out of their banks.

Communities along the Illinois, Kankakee, Grand, St. Joseph, Iroquois, Des Plaines, Elkhart, Yellow, Tiffin, Tippecanoe and others can expect major flooding in the coming days, even though the heaviest rain will fall farther south and east. Much of that periodic heavy rain will fall on the Ohio, Tennessee and lower Mississippi basins.

On Wednesday, a state of emergency was declared in Elkhart, Indiana as the St. Joseph River that flows through the town rose into major flood stage. Classes were canceled at Elkhart Central High School due to rising flood waters, with more school cancellations possible later this week as flooding continues. 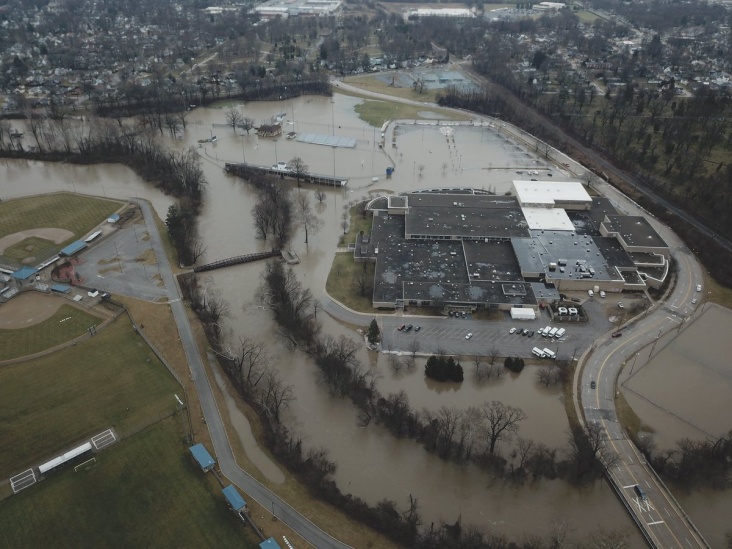 Minor to moderate flooding is expected to continue along the Ohio and middle to lower Mississippi rivers over the next couple of weeks as it takes much longer for the flooding cycle to occur on the large rivers.  By Sunday, areas from northeastern Texas to southern Indiana will have received between 4 and 8 inches of rain this week with locally higher amounts. This area will be at greatest risk for new flooding of widespread nature in urban areas, small streams and secondary rivers.

Surrounding this zone of the most persistent downpours will be lesser rainfall on the order of 2-4 inches into Sunday. Areas in southern Arkansas, northern Mississippi, middle Tennessee, eastern Kentucky, West Virginia, central Pennsylvania and central Ohio can expect incidents of isolated flooding which will be most prominent during each bout of drenching rainfall into Sunday. From Sunday to the middle of next week, the region experiencing or at risk for flooding is expected to catch a break from the relentless rainfall.

Dry and cooler air is projected to sweep in and turn off the Gulf of Mexico faucet. This several-day break should be enough to allow small streams and secondary rivers to return within their banks. However, it may take a few weeks until much of the Ohio and Mississippi rivers fall below flood stage. Water levels on the lower Mississippi and over much of the Mississippi Delta are likely to rise well into March. While floods along the rivers over the Central states are more common from March to June, some of the highest water levels have occurred during the winter.

Indications are that more rain is likely to develop over Texas and spread northeastward over the Ohio and Tennessee valleys later next week. Some of this rain has the potential to be heavy enough to aggravate flooding in some communities. Farther north, moisture from that storm may fall as snow around the Great Lakes and the Upper Midwest.

Much of the landscape and headwaters of the Mississippi and Missouri will remain frozen to prevent significant melting over the next couple of weeks. Meanwhile, ongoing drought conditions are playing a role in keeping water levels lower in rivers originating from the eastern slopes of the Rockies and High Plains, such as the Red, Arkansas and Platte.

Yes. But reading one "Type YES if you agree" brings all that stress flooding straight back. pic.twitter.com/2yFNTO1niQ

We’re live in Lansing this morning near Kalamazoo and Howard where the roads are closed due to severe flooding. pic.twitter.com/OeuhRwOiqw

This is a photo from viewer Carrie Harris. It shows a car that nearly went over the barrier at the north loop and 4th in Lubbock. It hit ice and lost control. Stay safe and avoid the major highways this morning! #ice #winter #weather #txwx pic.twitter.com/Cf5MF0v9sZ

It only takes 6 inches of flowing water to knock a person off of their feet & just 2 feet of flowing water can float a vehicle. Live coverage of the increasing flood threat from Texas to the Northeast continues, watch for the latest forecast and flooding updates. pic.twitter.com/oQ2Erqz0ai

A drone's view of downtown Cincinnati and New Richmond shows the worst flooding these areas have seen since March of 2015. pic.twitter.com/W1hplmOjRw

It only takes 6 inches of flowing water to knock a person off of their feet & just 2 feet of flowing water can float a vehicle. Live coverage of the increasing flood threat from Texas to the Northeast continues, watch for the latest forecast and flooding updates. pic.twitter.com/oQ2Erqz0ai

ELKHART, Ind. — Shelters were open Thursday to assist people forced from their homes by flooding in the Midwest, as rivers swollen by heavy rain and melting snow continue to rise in Indiana, Michigan and other states. Flood warnings were in effect across a wide swath of the central and southern U.S., from Wisconsin, Illinois and Ohio to Texas and Louisiana. The American Red Cross said it has opened eight shelters in northern Indiana, where crews used boats to help residents evacuate their homes.

In Elkhart and nearby Goshen, local officials declared a state of emergency and asked that traffic be limited to first responders and emergency personnel. Indiana University-South Bend canceled Thursday classes, and residents of a student apartment complex were encouraged to leave. “I ended up grabbing my favorite blanket and stuffed animals,” 15-year-old Madison Schmidt, who was evacuated from her home in Elkhart to a shelter at a church, told The Elkhart Truth newspaper. “I got into the boat. Seeing what happened, just almost made me cry.”

Other parts of the Midwest were under winter weather advisories on Thursday, with Kansas school districts and universities canceling classes and many state employees being told to stay home. In Michigan, states of emergency were declared in the Lansing area as officials recommended the evacuations of several neighborhoods. City officials said anyone living in the possible flood areas should temporarily leave their home by midday Thursday.

“While the rain has stopped, we are expecting significant flooding,” Lansing Mayor Andy Schor said.

Flooding also hit nearby Michigan State University , where some roads, parking lots and athletic fields were covered by water from the Red Cedar River that runs through its East Lansing campus. Classes in several buildings have been relocated and the school put up sand-filled barriers in an attempt to curb flooding.

“Be careful if you’re trying to come to campus,” Schor said Wednesday, noting that the river was at its highest levels since 1975. “Changing conditions are affecting not only the roads but sidewalks and walkways.”

The National Weather Service predicted the Grand River in Lansing would crest by late Thursday at 14.6 feet (4.5 meters), nearly 3 feet (1 meter) above flood stage. The Red Cedar River was forecast to crest at 10.3 feet (3.14 meters).

The storm system started pushing heavy rain, snow and ice into the region this week, affecting roads and other low-lying areas. The weather was been blamed for hundreds of car crashes and several deaths, including a crash that killed four people along a slippery interstate in Nebraska.

In central Michigan’s Fairplain Township, a 1-year-old girl was found dead Wednesday in standing water from rains and snowmelt in her backyard. In Oklahoma, authorities said 53-year-old Victor French of Stilwell drowned Wednesday when he drove onto a flooded bridge near Stilwell and was swept off the roadway.

Homes and streets also were flooded in the South Bend area of Indiana, and forecasters predicted that the swollen St. Joseph River wouldn’t crest until Thursday. Firefighters in Lake Station, Indiana, about 30 miles (48 kilometers) southeast of Chicago, evacuated some residents Wednesday after 15 to 20 homes were surrounded by about 2 to 3 feet of water. In Illinois, authorities issued an evacuation order Wednesday for residents in the city of Marseilles who live near the Illinois River. Fear of the rising river also prompted the evacuation of a nursing home in Ottawa.

Two days of rain in southern Wisconsin swelled waterways, leading to a handful of high-water rescues for people stranded in their vehicles. And in Iowa, the Wapsipinicon River topped flood stage, causing what was described as moderate flooding.