Photos: 3 dead after severe storms tear from Arkansas to Kentucky

The first severe weather outbreak of the year triggered tornadoes, extensive damage and flooding across the Mississippi and Ohio valleys at the start of the weekend.At least three people have died as a result of the storms, according to ABC News.

One person was killed inside their home after a tornado tore through Logan County, Kentucky, late on Saturday afternoon, according to the Logan County Sheriff's Department.  Two more deaths occurred in Arkansas and Tennessee.

It has not yet been confirmed whether these deaths were the result of three other reported tornadoes that swept through these states, including one that left severe damage in Clarksville, Tennessee. National Weather Service survey crews will confirm tornado damage and strength after investigating the wreckage across the region. 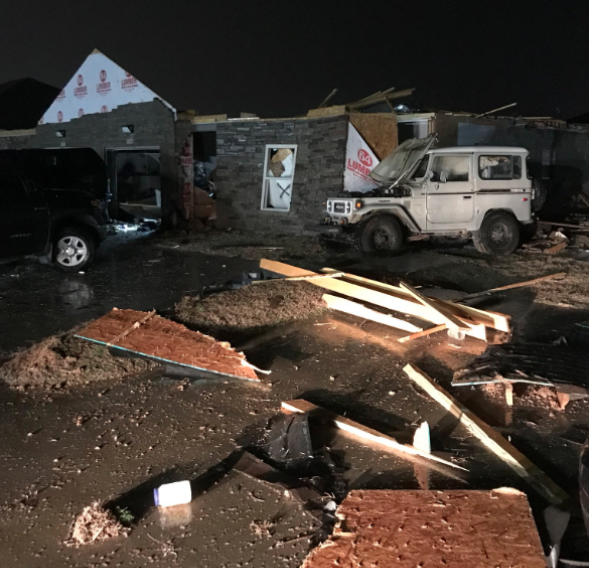 Pictures from the Missouri State Highway Patrol showed extensive damage across southeastern Missouri, but there have been no confirmed reports of a tornado in the state.

In addition to the damage inflicted by high winds and tornadoes, torrential rainfall led to widespread flooding, road closures and wash outs, water rescues and sinkholes.The flooding was exacerbated due to recent rainfall that left the ground saturated and rivers running high.

A flash flood emergency was declared for the Louisville, Kentucky, metro area on Saturday night after torrential rainfall caused water to rapidly rise, forcing numerous water rescues. The 2.98 inches of rain that fell in the city on Saturday set a new daily record. At one point during Saturday night, flash flood warnings extended along an approximate 700-mile stretch of the Ohio and Mississippi valleys.

As crews and residents assess damage and begin the clean-up process, drier weather is predicted for the region through Monday. As runoff flows downstream, moderate to major river flooding will persist, including along the Ohio and Mississippi rivers. Rain and the potential for more severe thunderstorms may return to the affected region late Tuesday through Wednesday.

DEVASTATING DAMAGE IN KEISER, AR:
It was directly hit. This gas station was demolished. I've seen roofs off multiple homes.
Tons of police from all over the area.
No word on injuries but "ambulances were here" according to officer.
People affected are sheltering at city hall. pic.twitter.com/BMroFbToj2

STORM DAMAGE - @LocalMemphis is getting a first look at damage from severe weather. Here are pictures of the Rodeway Inn in Osceola, Arkansas. @LocalMemphis pic.twitter.com/UxL00OPzcG

The death toll from severe storms in the south-central US on Saturday and Saturday night has risen to 4. Image via Missouri State Highway Patrol: https://t.co/YP9NuYsPfW pic.twitter.com/bRyznSQ9de

#BREAKING: People in #Louisville, #Kentucky are evacuating their homes as water continues to rise from heavy rain. A record 2.98 inches of rain fell Saturday at the airport. @ReynoldsWolf is live in Louisville all morning on @weatherchannel. pic.twitter.com/xkODzE3sbc