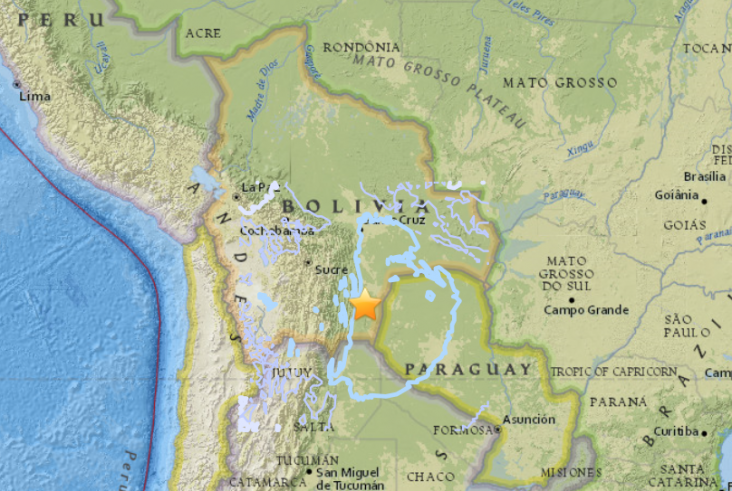 An earthquake of at least 6.6 magnitude shook Bolivia early on Monday, causing no damage or injuries but driving people out of office buildings as far away as Brasilia and Sao Paulo in neighboring Brazil, officials said. In Bolivia, the quake shook tall buildings, but no damage or injuries had been reported about two hours after the initial shake, according to the South American nation’s San Calixto Seismological Observatory.

The observatory put the quake’s magnitude at 6.6, but the U.S. Geological Survey (USGS) said it was 6.8. The tremor, whose epicenter was 346 miles (557 km) deep rocked an area approximately 186 miles (300 km) southeast of Sucre, a Bolivian city in the country’s southern highlands, the USGS said. In Brazil, the tremor shook high rises as far away as Sao Paulo and Brasilia, causing minor panic in a country where earthquakes are infrequent.

Television images showed workers leaving office buildings on Avenida Paulista, a central boulevard in Sao Paulo, about 1,240 miles (2,000 km) from the quake’s epicenter. In Brasilia, local broadcaster GloboNews showed dozens of people evacuating buildings in the city’s south side commercial district, some standing in the rain with umbrellas. The USGS initially put the quake at magnitude 6.9, and a depth of around 344 miles (554 km), but later revised its reading.