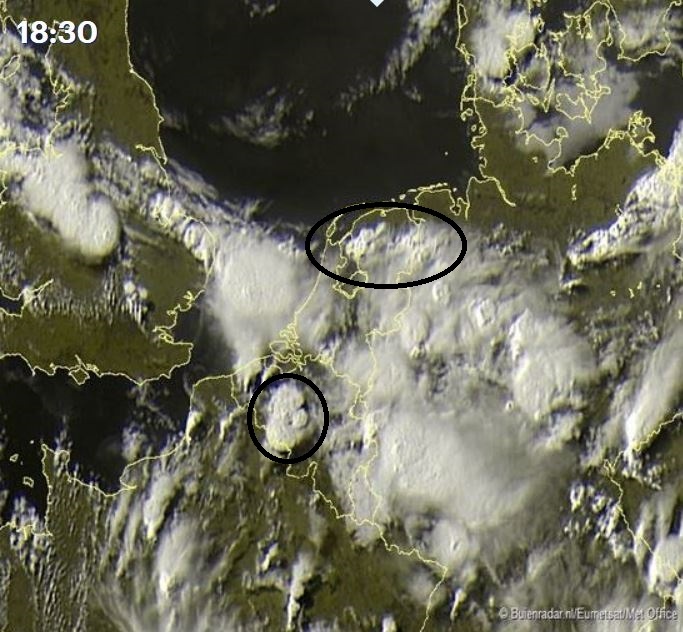 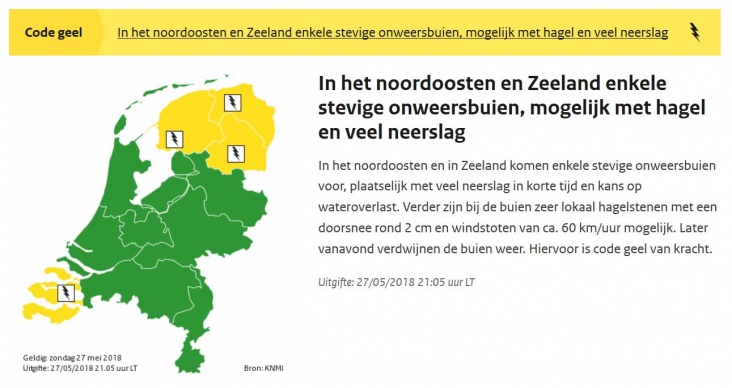 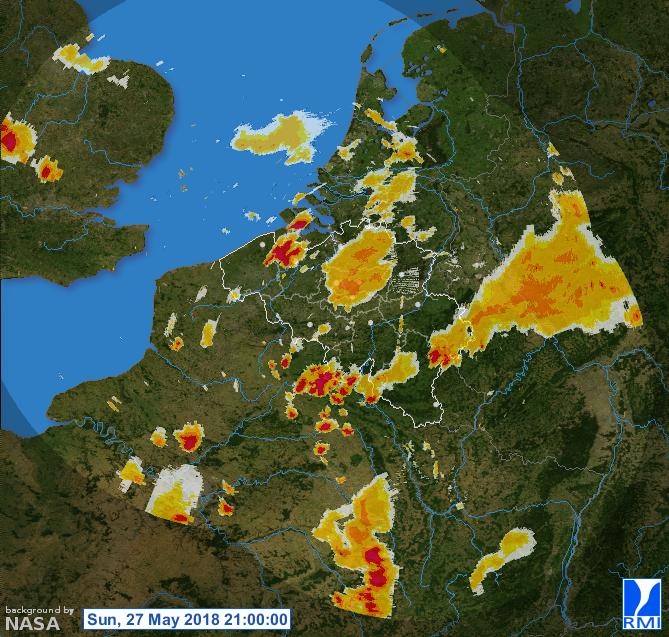 Another round of scattered to widespread, diurnally driven thunderstorms will form in the warm and moist air across much of Europe. CAPE will be confined to some hundred J/kg where convection forms early, but may reach 1000-2000 J/kg in areas of steeper lapse rates and/or delayed convective initiation, as indicated by several of Sunday's 12z sounding in central Europe. Vertical wind shear is weak with values around or below 10 m/s across the lowest 6 km. In terms of synoptic lift, the Spanish upper-level low sends several subtle vorticity maxima across France and the greater Alpine region, whereas synoptic lift is absent everywhere else.
Storms can bring moderately large hail in intiating stages and flash floods plus isolated cold-pool-driven severe wind gusts later on, when large clusters form. The hail risk is maximized to the N and E of larger mountains (Pyrenees, Alps, Apennines), where thermal upslope circulations beneath weak SW-erly mid-level flow may enhance vertical wind shear just enough to favor multicellular organization. Otherwise, flash floods are the dominant risk. Despite a lack of distinct convergence zones, two level 2 areas were introduced for those areas where models largely agree on widespread convective initiation under robust CAPE.
Weaker lapse rates limit CAPE magnitude over Spain, reducing the hail risk. However, partly embedded storms in vicinity of the upper-level low center could still cause a few heavy rain events, hence the level 1 was extended there.

The eastern boundary of the thunderstorm-prone area is formed by drier and slightly cooler air that infiltrates into E-central Europe, but this zone is quite diffuse. It should be noted that GFS and WRF show much more CAPE in this zone (E Germany, Poland, Slovakia, Romania) than the rest of the models. The thunder and risk level areas were drawn rather conservatively here, following the majority of the model pool and considering the presence of weak synoptic subsidence, which should reduce storm coverage even in case the higher CAPE values should yet materialize.
Viktor Peters
Lid
Woonplaats: Gouda
Berichten: 553
Lid sinds: 17 apr. 2012
28 mei 2018, 10:05 uur | Bericht #487017 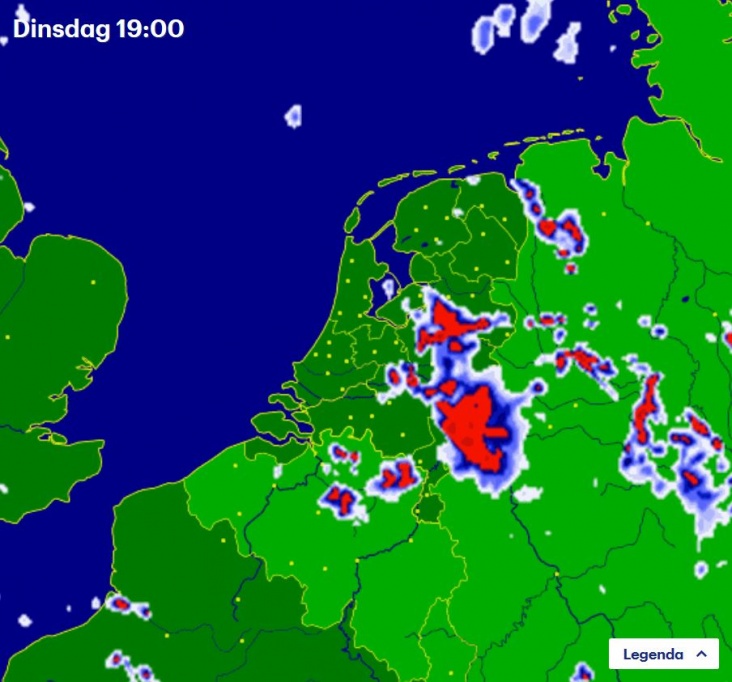 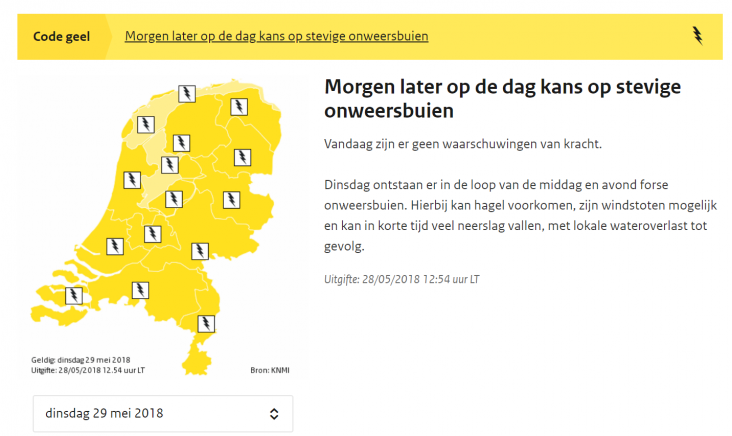 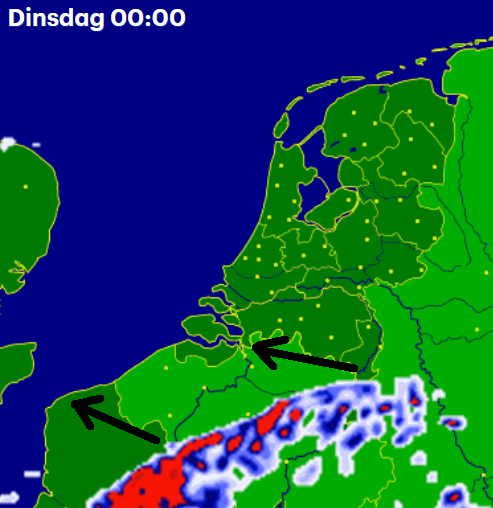 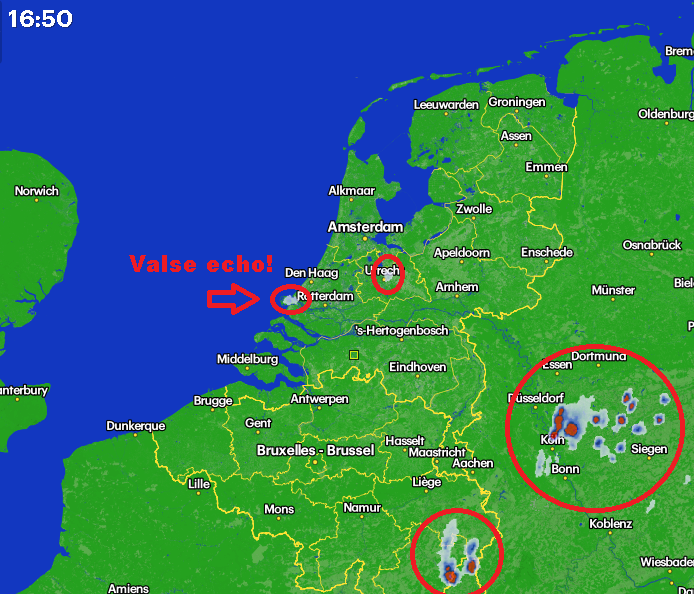 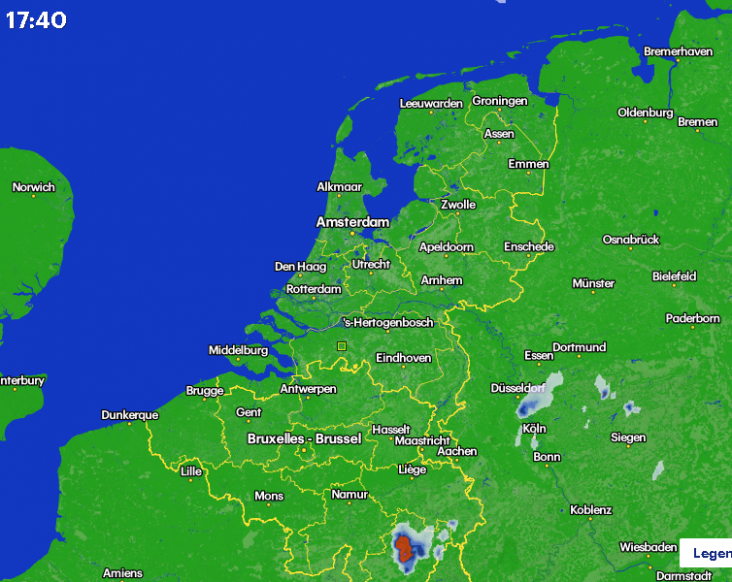 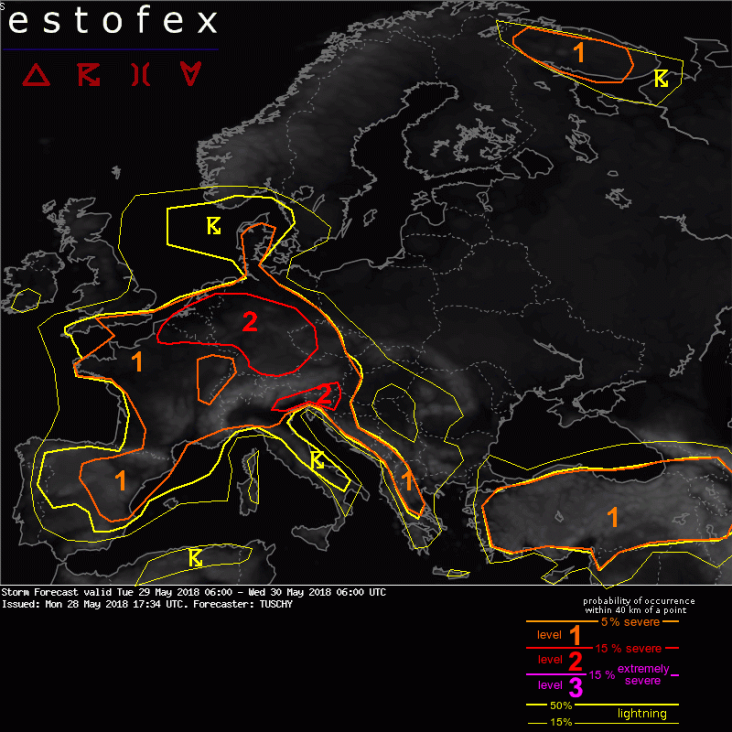 A level 2 was issued across NE-France and Benelux to Germany and the W-Czech Republic mainly for excessive rain.

... NE-France to Benelux and Germany and the far W-Czech Republic ...

An active severe thunderstorm day is in store with excessive rain being the main focus.

Forcing arrives during the day in form of a broad mid-/upper level trough, which swings from Switzerland/E-France to far SE-UK during the night. In addition, the already mentioned LL pressure channel adds additional LL forcing for CI. Models disagree in smaller-scale vortices, embedded in this low pressure channel, which could result in regionally augmented lift. The most likely path of such a vortex seems to be from W-Germany to Belgium. Beside that synoptic-scale input, the mesoscale/orography will once again dominante in where and when CI occurs.

A prolonged confluence regime allows a gradually deepening BL with LL mixing ratios in excess of 10 g/kg over a broad swath from Benelux to Germany. Aloft, mid-level lapse rates, although not that steep, were able to recover a bit due to missing widespread convective overturnig from the previous day and ongoing weak differential temperature advection. Therefore all models agree in widespread 1-1.5 kJ/kg MLCAPE whith substantially higher values highlighted by some CAMs along pronounced LL mesoscale convergence zones. PWATs oscillate between 25-35 mm.

It's not a col situation, but nevertheless a complete breakdown of the steering flow is anticipated with forecast storm motion vectors of 5 kt or less. In addition, 1-2 km AGL flow along the east side of the low pressure channel is enhanced which appears in forecast hodographs in form of small and looped hodograph structures (indicative of potential training situations). Given the amount of CAPE, robust updrafts are forecast despite missing shear with slow moving pulsating cells/multicells.

CI is forecast around noon with constant increase of thunderstorms thereafter. The quasi-stationary nature of those thunderstorms results either due to the absent steering flow or due to regionally enhanced LL flow (favoring training/back-building). Storms also remain anchored to the mountainous areas for some time. Obviously, excessive rain is a substantial threat. Similar to past events, a few thunderstorms may deviate (e.g. along outflow boundaries), ingesting enhanced streamwise vorticity and coupled with augmented LL CAPE/low LCLs will pose a temporal tornado threat. Beside that, isolated large hail is possible with initiating storms due to robust updraft strength and also swaths of strong to isolated severe wind gusts can occur as cold pools conglomerate into temporarily forward propagating small-scale MCS events.

Of interest could be the potential spin up of the vortex, which shifts from far W-Germany to Belgium. This additional forcing and its progressive nature could modify the overall convective mode to a more linear and progressive one over far W-Germany, Luxembourg and Belgium as indicated by a few model outliers. This would lessen the rainfall risk a bit and increase probabilities for severe wind gusts. Therefore the evolution of this potential vortex has to be monitored closely.

Despite those uncertainties, a broad level 2 was issued and was expanded far north over Germany to cover more isolated extreme events. This also includes an eastward expansion towards the W-Czech Republic, where CI is possible in an high CAPE/weak shear setup (despite stronger capping). The level 2 highlights the current state of knowledge with the highest threat of excessive rain, where potential significant flash flood events can occur. In case extreme rainfall amounts impact complex orography or urban areas, devestating and life-threatening flash floods can occur! 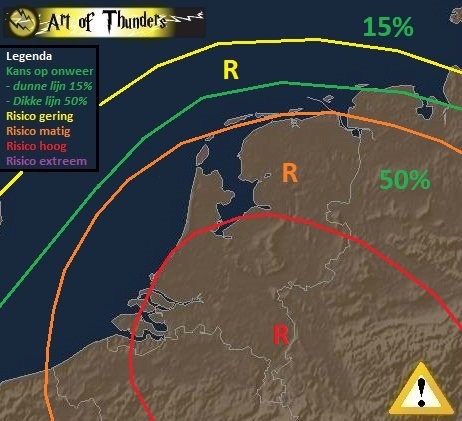 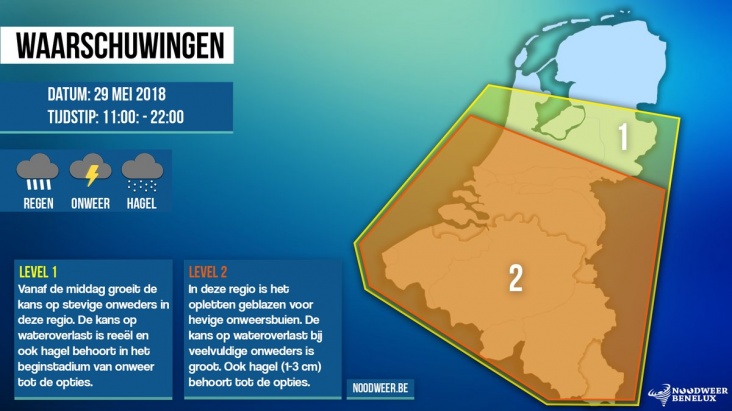 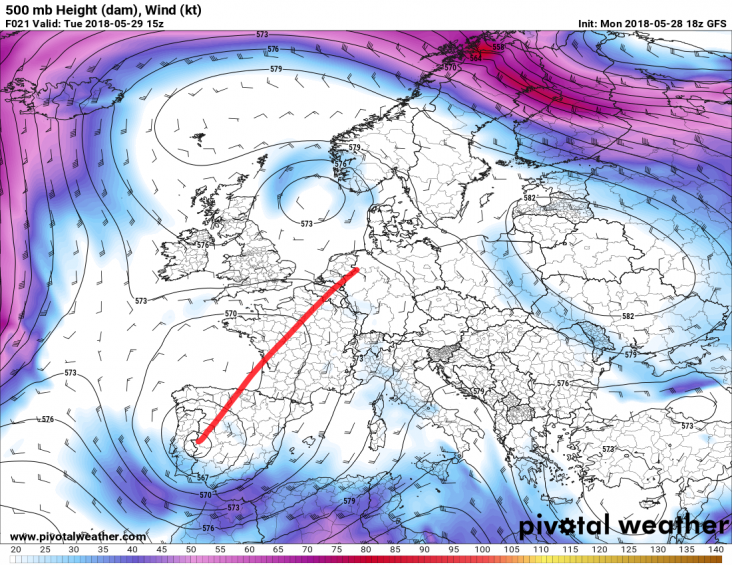