2 storey homes are not high enough in #HurricaneDorian #Freeport . Please continue to pray for our people pls. pic.twitter.com/CqMHI7hYRc

from @mvp242 #HurricaneDorian beating up my Freeport,Bahamas ???????????????? The wind and rain is nothing we have ever seen before! Cars, homes total loss #Dorian2019 #flooded #PrayForTheBahamas pic.twitter.com/g1wBBVE1HH

While some @NASAEarth missions are tracking #HurricaneDorian as it makes its way toward the US, some are looking at what Dorian has already left behind. Here's a map of the Bahamas with areas highlighted in light blue that were likely flooded. Look closer: https://t.co/Vxo6yK1wpI pic.twitter.com/fPaOPSBx8A

Our @SamaritansPurse DC-8 has arrived in the #Bahamas. Would you pray as our team prepares to help storm victims in hard-hit areas? #HurricaneDorian pic.twitter.com/7Nxpkjve15

This Fort Lauderdale-based yacht is preparing to ferry a mountain of food, fuel & an amphibious vehicle from @chefjoseandres group, World Central Kitchen, to the Bahamas for #HurricaneDorian relief. Story at 7 @CBSMiami pic.twitter.com/K4FCN9Y5iW

VIDEO of #HurricaneDorian shows 62 mph wind and rain whipping thru Kennedy’s Launch Control Center parking lot at 3am ???? ???? Data from our 250 foot tower clocked the top windspeed at 90 mph. The closest approach Dorian’s eye to the Cape was 70 nautical miles. pic.twitter.com/QR4fB9hZ89

An aerial view of damage caused by #HurricaneDorian is seen in Marsh Harbour on Great Abaco Island on September 4, 2019 in Great Abaco, Bahamas. ????: @olsongetty pic.twitter.com/aIpMmUpdua

People in Florida are sending aid to the Bahamas to help with #HurricaneDorian. The effort is being organized by churches, including one founded by people from the Bahamas. Many say they have not been able to reach relatives. pic.twitter.com/YRsp3JrOaK 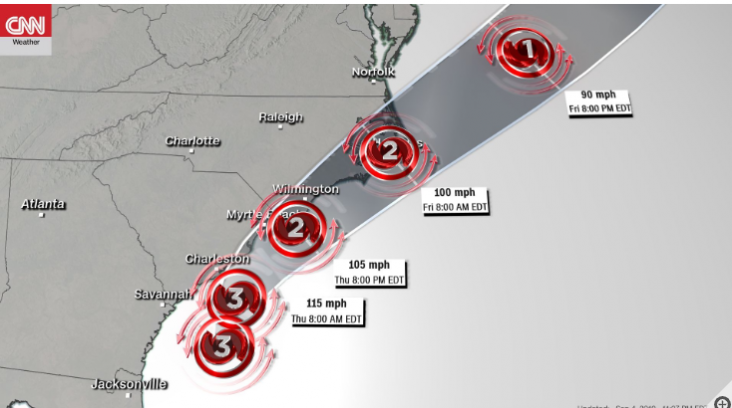 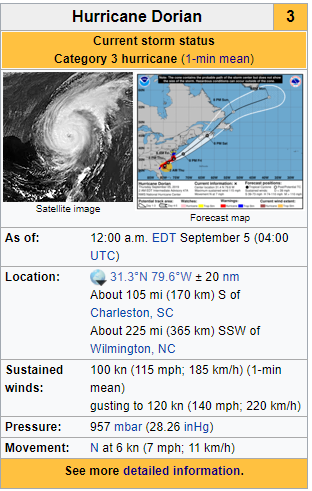 Hurricane "Dorian" is expected to bring damaging winds and life-threatening storm surges along a large portion of the Southeast and Mid-Atlantic coasts of the United States during the next couple of days, NHC warns. It continues to lash the coast of the Carolinas, with hurricane conditions likely over portions of the area later today. The center of Dorian will continue to move close to the coast of South Carolina through the day, and then move near or over the coast of North Carolina tonight and Friday.

A Storm Surge Warning is in effect for:

A Hurricane Warning is in effect for:

A Tropical Storm Warning is in effect for:

A Tropical Storm Watch is in effect for:

"Even if there isn't a landfall, the impacts are still going to be great everywhere from the Georgia coast toward the Carolina coast, but I'm more worried about more significant impacts along the South Carolina coast and the North Carolina coast over the next 48 hours or so," AccuWeather Chief Broadcast Meteorologist Bernie Rayno said.

The death toll in the Bahamas climbed to at least 20 on Wednesday, September 4, 17 from the Abaco islands and three from Grand Bahama, according to the Associated Press. However, there are reports coming out suggesting a much larger number.

"We can expect more deaths to be recorded," Bahama Prime Minister Hubert Minnis said on Tuesday at a press briefing. "Our priority at this time is search, rescue and recovery. We are in the midst of one of the greatest national crises in our country’s history."

Dorian is a category 3 hurricane on the Saffir-Simpson Hurricane Wind Scale. Some fluctuations in intensity are expected this morning, followed by slow weakening through Saturday, September 7. However, Dorian is expected to remain a hurricane for the next few days.

A turn to the north- northeast is anticipated today, with a turn toward the northeast by tonight (EDT). A northeastward motion at a faster forward speed is forecast on Friday, September 6.

On the forecast track, the center of Dorian will continue to move close to the coast of South Carolina through the day, and then move near or over the coast of North Carolina tonight and Friday.

The center should move to the southeast of extreme southeastern New England Friday night and Saturday morning, and approach Nova Scotia later on Saturday.
Hurricane-force winds extend outward up to 95 km (60 miles) from the center, and tropical-storm-force winds extend outward up to 315 km (195 miles). The National Weather Service Forecast Office in Charleston, South Carolina, recently reported a wind gust to 109 km/h (68 mph) at the Charleston International Airport.

Tropical storm conditions are possible over portions of southeastern Massachusetts by late Friday or early Saturday.

The combination of a dangerous storm surge and the tide will cause normally dry areas near the coast to be flooded by rising waters moving inland from the shoreline.

The water could reach the following heights above ground somewhere in the indicated areas if the peak surge occurs at the time of high tide:

Water levels could begin to rise well in advance of the arrival of strong winds. The surge will be accompanied by large and destructive waves. Surge-related flooding depends on how close the center of Dorian comes to the coast, and can vary greatly over short distances.

Dorian is expected to produce the following rainfall totals through Friday:

A few tornadoes are possible through this afternoon near the coastal South and North Carolina border area. This threat will expand northeastward across the rest of eastern North Carolina during the afternoon and continue into tonight.

The death toll in the Bahamas has risen to 30 from #HurricaneDorian, says the country's Health Minister Duane Sands #Dorian pic.twitter.com/DHsz2y5KTD

Here are the maximum wind gusts we've seen over the last 12 hours. We're expecting to see some higher gusts along the Crystal Coast as #Dorian inches closer to our coastline! #NCwx pic.twitter.com/GQQr9XpDMt

RT AccuChaffin: Wilmington, NC is getting hammered with damaging winds and rain from #Dorian. We still have power, but it is starting to flicker on and off. I have never seen so much lightning and thunder with a hurricane before, it’s definitely a unique… pic.twitter.com/K8p1CWLgUU

Eyewall of category 2 hurricane #Dorian sitting just south of Morehead City, NC.
Radar has been indicating winds of >105mph at 2000ft in the NE eyewall, about 20 miles from the coast. pic.twitter.com/TWoI8R68MD

#Dorian downgraded to category 1 as it closed in on the coast of North Carolina, U.S., on Friday, bringing strong winds pic.twitter.com/pbUvqJVzEq

We’re about 15 miles due north of #Dorian’s eyewall now at the office! #NCwx pic.twitter.com/Qp1EFl2kgW

US Customs and Border Protection News helping injured civilians in the Bahamas earlier this week following #Dorian's catastrophic impacts on the islands.

.JimCantore is live in Kure Beach, NC as we continue to track #Dorian throughout the evening. pic.twitter.com/JAZljtmMH7

#Dorian has begun to produce brief, spin-up tornadoes in eastern North Carolina. While the majority of these tornadoes will be of EF-0, or EF-1 strength, they can be strong enough to knock over trees and damage roofs well inland of the coast: … pic.twitter.com/uIThaYOOIn

RT AccuChaffin: #Dorian’s eyewall is about 115 miles away from Wilmington, NC as of 2 pm, but this wind and rain makes it seem like the eyewall is hitting. The storm is just getting started here, we still have a long way to go! breakingweather accuweather pic.twitter.com/km2hPkHusl

Rain and winds are picking up along the waterfront in New Bern. #dorian pic.twitter.com/dKY8bHREqa

A waterspout off Emerald Isle. This was around 9 AM, Bogue Inlet Pier courtesy @surfline #dorian Please seen an interior room if you are under a Tornado WARNING along the Crystal Coast! pic.twitter.com/Fw0RRrw6ZJ

Conditions have quickly deteriorated at @NOAA buoy 41004 which is now in the southern eyewall of #Dorian. From calm winds and birds flying in the eye to near blackout conditions and a measured 98 mph gust! pic.twitter.com/qf1nQ5Edms

Just as the wind field of #Dorian has grown, so has the size of its eye. This time lapse video taken yesterday afternoon from @NOAA_HurrHunter #NOAA42 shows its huge eye. Please follow @NHC_Atlantic for the latest forecast! pic.twitter.com/ALdqrMtJLc

Cockpit video from inside the eye of Hurricane #Dorian from today's flight off the coast of South Carolina. Continue to monitor https://t.co/3phpgKMZaS for the latest updates and advisories. #FlyNOAA

Inside the eye of #Dorian
Hopetown, Abacos pic.twitter.com/vnOZPOkoWO

Dunes held up well on Tybee Island during the storm #Dorian https://t.co/xARABei0HK

.@TWCChrisBruin reports loss of power at his location in Morehead City, NC as our #Dorian coverage continues. pic.twitter.com/oVtwZu0OM0

Sparks flew from these power lines, located in Titusville, Florida, after Dorian had knocked out power to multiple homes in Florida. https://t.co/nbT7ZvLFm7 pic.twitter.com/zYb92rECeO

An aerial view of damage caused by #HurricaneDorian is seen in Marsh Harbour on Great Abaco Island on September 4, 2019 in Great Abaco, Bahamas. ????: @olsongetty pic.twitter.com/aIpMmUpdua

Here's a final storm-centric loop of #Dorian from when it first became a #hurricane east of Puerto Rico (Aug. 28, 2019 at 18Z) through its transition to an extratropical cyclone near the Canadian Maritimes (Sep. 8, 2019 at 12Z). pic.twitter.com/SrrlBjjEYo 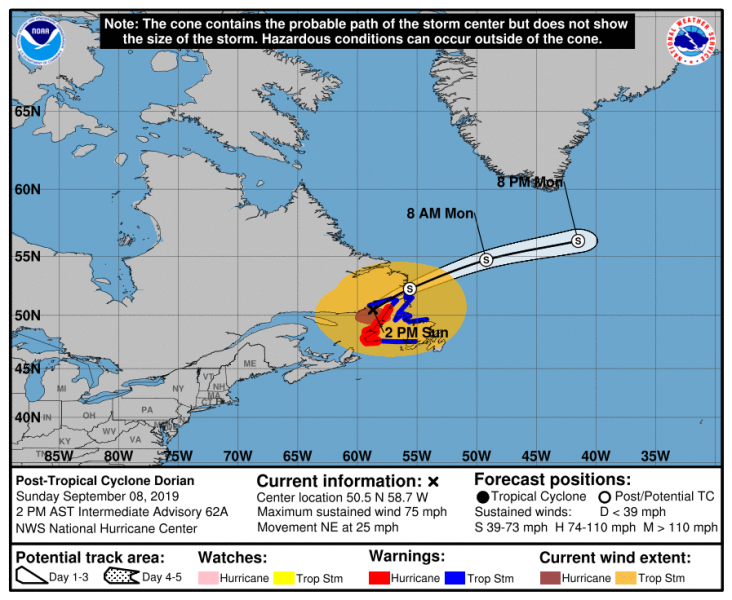 From my daughter in Halifax at Dalhousie, who smartly is again hunkered down with her roommates after venturing out briefly during the eye. #Dorian #NSStorm pic.twitter.com/g9iLwre1GE

We miss your sea-bound coast, your dark, dreary mountains.

We know #HurricaneDorian left a mark. We know our brothers and sisters are waiting to help. We’re thinking of you.

“This was a direct hit by a nuclear-grade hurricane,” says hurricane chaser Josh Morgerman, who was in the Bahamas during Hurricane Dorian.

He says he saw people who died and helped families protect their children by wrapping them in blankets. https://t.co/pw0nRNhHhF pic.twitter.com/gOC6gj6sV9