Tropical Storm "Dorian" strengthening on its way toward the Lesser Antilles

Tropical Storm "Dorian" formed August 24, 2019, as the 4th named storm of the 2019 Atlantic hurricane season. The system is strengthening on its way toward the Lesser Antilles. A Tropical Storm Watch is currently in effect for Barbados. It is too soon to determine the specific timing or magnitude of impacts in Puerto Rico or Hispaniola, but interests in those areas should monitor the progress of Dorian. Dorian is likely to be a difficult cyclone to forecast, NHC said.

This general motion is expected to continue today, followed by a motion toward the WNW on Monday and Tuesday.

On the forecast track, Dorian is expected to be near the central Lesser Antilles late Monday or early Tuesday.

"There has been a noticeable change in the guidance tonight, with many models faster and to the southwest of earlier runs," NHC forecaster Blake noted. "This is not uncommon in the early stages of tropical Atlantic cyclones where the guidance has historically demonstrated a slow, poleward bias. Given the lack of interaction with even features at the subtropical latitudes, it makes sense to follow the trend of the latest guidance and shift the track about 30 nautical miles (55 km / 34 miles) southwest during most of the forecast."

"Notably, the GFS and ECMWF models are still south of the new NHC prediction, and further adjustments could be required later today. The intensity forecast appears to be a battle between an increasingly conducive oceanic and shear environment during the next couple of days versus plentiful dry air in the mid-levels of the atmosphere. These mixed conditions primarily point toward slow strengthening during that time while Dorian approaches the Windward Islands, and no change has been made to the first part of the forecast."

"While Dorian still has a chance to become a hurricane over the eastern Caribbean, model guidance has been trending toward a higher-shear environment caused by a large upper low in a few days. Thus the intensity forecast is reduced from the previous one at long range, although it remains above most of the guidance. It should be stressed that Dorian is likely to be a difficult cyclone to forecast due to the marginal environment it is embedded within and its small size."

A Tropical Storm Watch is in effect for Barbados. Tropical storm conditions are possible within 48 hours.

Additional watches will likely be issued later today for portions of the Windward and Leeward Islands. Elsewhere, interests in Puerto Rico and Hispaniola should monitor the progress of the storm.

Dorian is expected to produce total rain accumulations of 50 - 100 mm (2 to 4 inches) in portions of the Lesser Antilles, with possible isolated maximum amounts of 150 mm (06 inches).

Tropical storm conditions are possible within the watch area by late Monday.

Swells generated by Dorian will be affecting portions of the Lesser Antilles by late Monday. These swells could cause life-threatening surf and rip current conditions.
Bron: watchers.news

Tropical Storm #Dorian has formed in the Atlantic, the fourth named storm of the Atlantic hurricane season pic.twitter.com/GIHZisrU4y

Hopefully we clear up some model uncertainty. pic.twitter.com/MdvqwoOj8b

Hi from St. Croix. #Dorian was beautiful. We got some good data. #FlyNOAA pic.twitter.com/fop9KSehy0

You can see the multiple rounds of pulsing convection through the day slowly molding into a better organized central dense overcast. Always love watching the overshooting tops stand out at sunset! pic.twitter.com/iV2UVbRGXi

One of the most concerning parts of the #Dorian track is how slow it gets near Florida. Storm surge and wind will likely be life-threatening, but let’s also prepare for an inland flood disaster somewhere in southeastern U.S. That hazard has taken the most lives in recent years. pic.twitter.com/IYL1BuoSuQ

I could watch this all day- eyewall mesos form and then they smooth out (axisymmetrization) - #Dorian is becoming nasty NE of Puerto Rico- note the first inner-core lightning too. Calling ⁦@GigEm12_Steph⁩ pic.twitter.com/F0KRDUG08g

Video from Shaun Kadison on her boat on St. Thomas, near Charlotte Amalie during the #Dorian northern eyewall pic.twitter.com/n3pdMDeB0P

WOW! #Dorian is hammering the #USVI & #BVI with wind gusts clocked to 97 MPH at 231' at Estate Bovoni.
???? lion.lioness in Charlotte Amalie, St. Thomas. We've got the latest on the @weatherchannel#HurricaneDorian#weatherchannel pic.twitter.com/JHy8FrX6gf 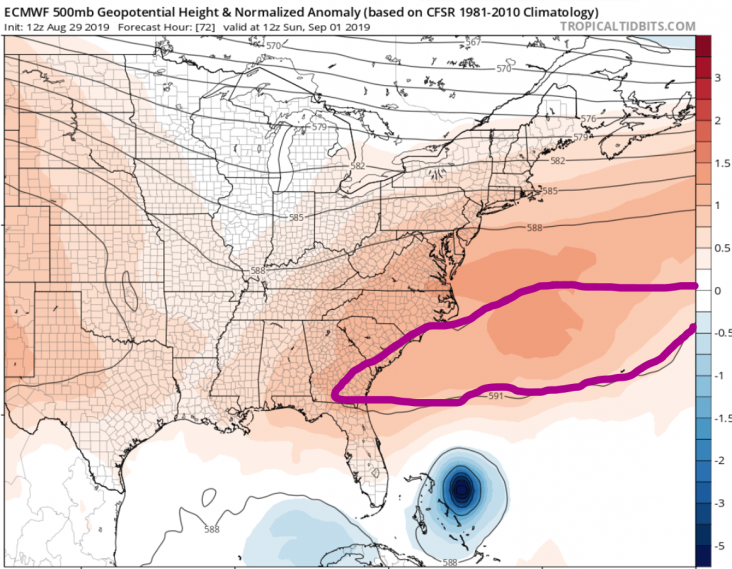 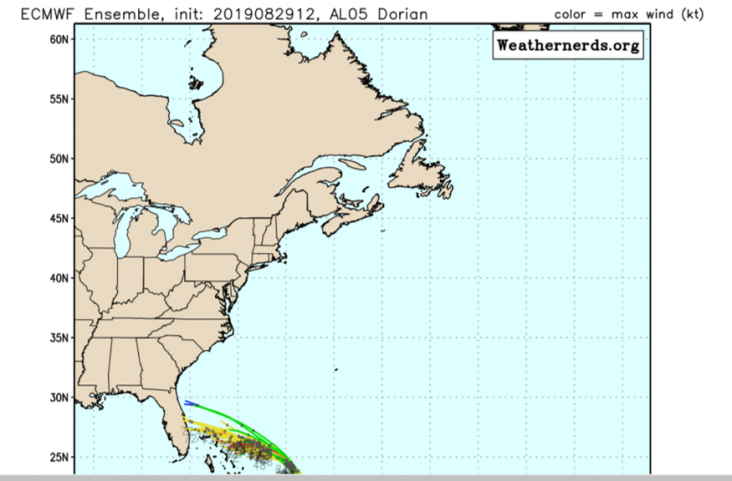 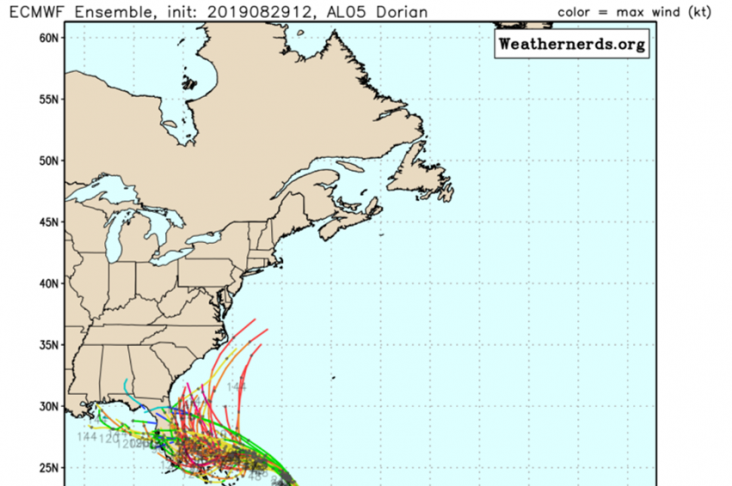 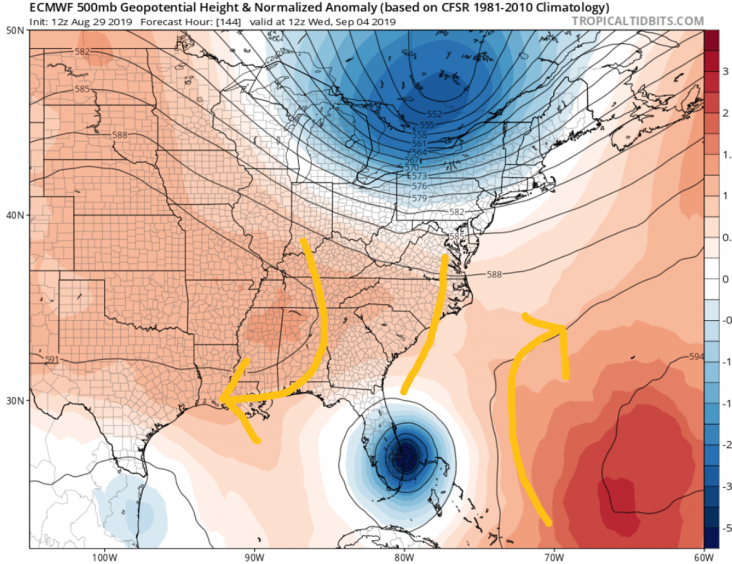 As #HurricaneDorian approached the #AbacoIslands, NOAA's #GOESEast zoomed in on the powerful storm's eye. The Cat. 5 storm's "maximum winds have increased to near 175 mph with gusts over 200 mph," according to @NHC_Atlantic. Follow the storm: https://t.co/VDEWvXtPxt pic.twitter.com/wLnZjJJYMO

The wide eye of #HurricaneDorian is visible even from the #GOESEast perspective 22,300 miles away in space. While some fluctuations in intensity are possible, this major Cat. 4 storm is expected to remain a powerful #hurricane during the next few days. https://t.co/rLy6BjBSih pic.twitter.com/LtRtjRrEks

RT @SMF_SaltLifeC Marsh Harbour Abaco ppl trying to get out in trucks and tractors ???? ????????????I pray they get to safety and my family is safe pic.twitter.com/LAopgxpofp

#Dorian has nearly stalled out over Grand Island with sustained winds at 175 mph. Simply cannot fathom what grim conditions the island is experiencing right now. pic.twitter.com/n22WRosLzx

Outer rainbands from #HurricaneDorian starting to come onshore in Vero Beach, Florida. The plan is to follow the eye north along the coastline in the H.E.R.V. and be in position just in case it makes landfall and/or document it’s closest approach to the coast. Watching closely... pic.twitter.com/qofafsGi5W

This mornings satellite images of #HurricaneDorian as it moves west towards Floridas coast, uncertainty on tracks still but its currently over grand bahama Island! Winds gusting still over 200mph; #Dorian #Dorian2019 pic.twitter.com/9LbMXxM9Ou

Praying for Florida as #HurricaneDorian approaches. Please get to safety. pic.twitter.com/TTBIj6Fxvn

An Instagram follower sent me this
video from the Bahamas which she said was sent to her by her friend in Nassau #hurricanedorian pic.twitter.com/6WZEDUAKjX

The Atlantic is already eating away at the dunes here in Indian Harbor Beach, FL. #Dorian will decimate these beaches due to the slow movement west then north = severe erosion. Potential storm surge of 4-7' with 10-15' breakers #HurricaneDorian pic.twitter.com/CqnkomW57D

The view inside the “stadium” eye of Category 5 #HurricaneDorian today from the #NOAA42 “Kermit” Hurricane Hunter @NOAA_HurrHunter pic.twitter.com/wHjR7GgPRs

This was during the eye of #HurricaneDorian in Abaco island, #Bahamas a little while ago this afternoon! Cars have been flipped over due to the dangerous life threatening wind speeds! Source Olie.Martini Insta #Dorian2019 #Dorian pic.twitter.com/HH68emMVLz

DEVASTATION. Video of the destruction of Hurricane Dorian hitting the Abaco Islands. I hope these people get back inside because while calm now, winds will increase rapidly and unpredictably after the eye passes. #HurricaneDorian #AbacoIslands #Abaco #Hurricane (via James Julmis) pic.twitter.com/fdwYkqVwnh

For 5 hours now the Category 5 Hurricane Dorian has been hitting the Bahamas & still not over.
Please, all prayers to the families in the Bahamas that they all make it safely through the night. ????????#Bahamas#AbacoIslands #HurricaneDorian pic.twitter.com/yNwRJImG9A

An Instagram follower sent me this
video from the Bahamas which she said was sent to her by her friend in Nassau #hurricanedorian pic.twitter.com/RL9XUcxBZd

ROOF RIPPED OFF. This is the view inside of a home in #Abaco. There's a young boy trapped inside, a roof that was ripped off and an insane amount of water rising. And it's not over just yet. #AbacoIslands #Dorian #Dorian2019 #HurricaneDorian #Bahamas (via Taneka T) pic.twitter.com/fNBO8vbNRQ

If you think your job is hard, imagine being a hurricane hunter. #HurricaneDorian pic.twitter.com/SOmSC2RSdo

**HAPPENING OVERNIGHT** New video coming in from Freeport, Grand Bahama, looking toward the Shipyard & Freeport Harbour (facing west). Listen to the powerful winds whipping through the city with the eye of #Dorian currently 40 miles to the East. #Bahamas #HurricaneDorian pic.twitter.com/vnBQ0cn1Nf

Take a look inside the eye of #HurricaneDorian as it slowly crawls over Grand Bahama Island. Read the latest: https://t.co/Lz4agH8HgW pic.twitter.com/woLSRB1ivh

The US states of Florida, Georgia, North and South Carolina have all declared states of emergency. #HurricaneDorian

This aerial footage of the Bahamas shows the destruction from Hurricane Dorian on Great Abaco Island https://t.co/U4sOpjIcaa pic.twitter.com/egU2yw13BZ

Since records began in 1851, #Dorian is the slowest moving major hurricane (something that scientists have linked to a warming climate). This is what happens when a storm just sits like a blender over the Bahamas. pic.twitter.com/5qxHKfh7N7

HEARTBREAKING - We have more footage coming out of the #Bahamas tonight. Absolute devastation remains after #HurricaneDorian made its way across the island nation. Our thoughts are with those who have been affected by this terrible storm. #Dorian pic.twitter.com/w4573IXd7K

Near peak winds during #Dorian landfall in #MarshHarbour #Abaco on Sunday pic.twitter.com/qf0k3xPkLO

Heartbreaking footage shows the destruction Hurricane #Dorian left on Abaco Island, where it made landfall in the Bahamas pic.twitter.com/jctkTs1iFS

WATCH: This man tells his story of surviving Hurricane #Dorian, and additionally says his wife drowned and he could do nothing to help save her. #Bahamas pic.twitter.com/UTbUBFz1jN

The @DeptofDefense is actively postured with more than 2,700 personnel, 40 helicopters and 80 high-water clearance vehicles to support federal, state and local partners should our assistance be requested for #Dorian support. pic.twitter.com/1aIhkINcDH

We are starting to get some aerial pictures from Abaco where #Dorian made landfall as a 185 mph CAT 5 hurricane. Needless to say, damage is catastrophic. Credit: James Julmis pic.twitter.com/CwgljP00xp

#Dorian has picked up speed and is now moving NW at 6 mph. It is expected to move near or over the Carolinas sometime late Thursday.

Hurricane watches and warnings have been extended northward, and a tropical storm watch is now in effect for parts of coastal Virginia. pic.twitter.com/iKx2FY2JWu

As you head to bed this evening, how about a prayer????or a few thoughts for those who are now homeless, stranded, hurt, scared - or alone ... because of #Hurricane #Dorian. This video is just one story. ???????? ✝️✡️☪️????️????pic.twitter.com/PYShFcLXvo

Storm surge is probably the most dangerous potential threat from #Dorian. Dr. @GregPostel shows what these impacts may look like. pic.twitter.com/krdySmgB8a