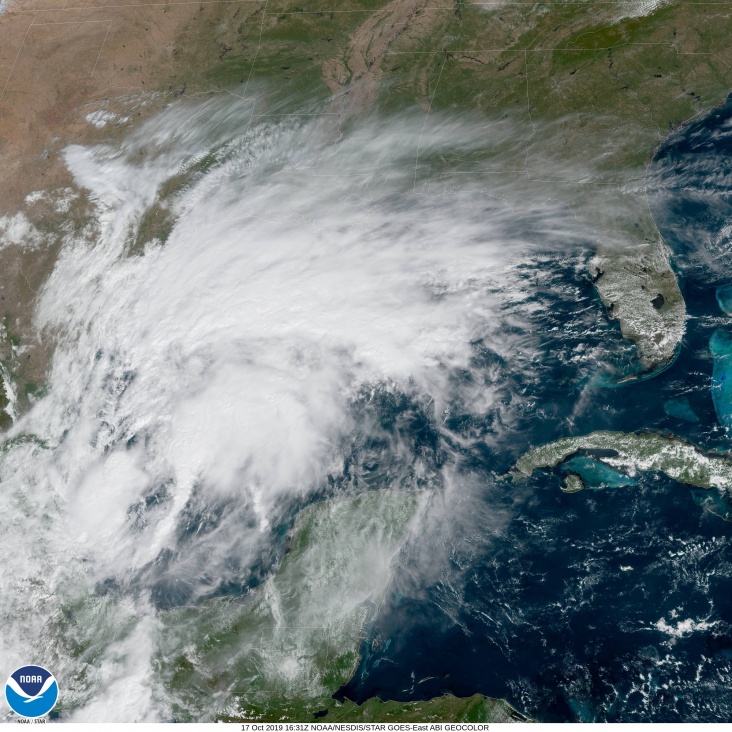 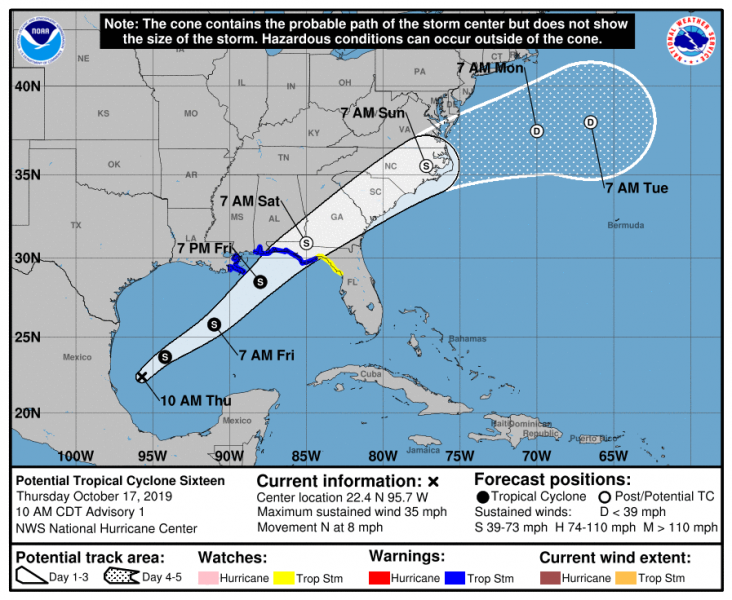 Interesting that ECMWF 06z develops "Nestor" in the Gulf of Mexico into a Hurricane.

Gulf of Mexico ocean temperatures are still "summertime" warm in the 80s so plenty of fuel for intensification. pic.twitter.com/PCmSjbn6i4

What may soon be #Nestor is expected to take a very similar track to that of Tropical Storm #Josephine, another October storm. pic.twitter.com/l7K1rJ1jPe

Tornadoes spawned by Tropical Storm Nestor overturned at least one semi-trailer on Interstate 4 and caused damage at a mobile home park near Tampa. More than 13,000 people were without power in Florida Saturday morning according to poweroutage.us, most of them in Polk County, where a tornado knocked over a semi on I4 near Lakeland. The tornado then moved near the town of Kathleen. Power flashes and debris was reported in both towns. Photos and video posted to social media showed debris blowing on the interstate and a semi that had flipped onto a car. There were no immediate reports of injuries.

BREAKING: I-4 WB is at a crawl after an 18 wheeler rolled over on top of an SUV with a family visiting from Illinois after a possible tornado crossed I-4. Thankfully the occupants of both vehicles escaped with no injuries. pic.twitter.com/bl4hKC0AEy

BREAKING: significant damage in Kathleen. This RV was blown onto a house. Major damage to roof of Kathleen Middle. @abcactionnews @DenisPhillips28 pic.twitter.com/JX9FsedVIP

An earlier tornado touched down in a mobile home park near St. Petersburg, near Seminole, causing damage to roofs and trees in the area.

LOOK ???? Likely tornado damage in Seminole. A car port and roof was torn off one home on Temple Terrace. You can see a straight line of damage that made a beeline for the house, knocked out fence panels. @wfla #flwx pic.twitter.com/e0Pfo6KkMF

While tornadoes touched down in central Florida, residents awaited the storm in northern Florida, including Panhandle communities like Mexico Beach that were left vulnerable after Hurricane Michael struck in 2018.

"When you’ve been through the trauma that we’ve all been through because of Hurricane Michael, that definitely affects how you look at things," Tricia Pearce, community relations director at Life Management Center of Northwest Florida, told weather.com. "Some people have elevated levels of anxiety at this time so even a small thunderstorm coming through can affect that.”

The center has set up state-funded mental health outreach teams that have been going out into neighborhoods hard hit by Michael, which slammed into the region with winds up to 160 mph a year ago last week. The teams have provided counseling or education to about 12,000 individuals, Pearce said. Some are still living in tents, trailers or other temporary shelters, or in homes with still-leaky roofs.

Pearce said some survivors are expressing fears that Nestor could suddenly change or grow larger with no warning. Michael was an unprecedented storm that rapidly intensified from a tropical depression to Category 1 hurricane in just 24 hours, and further intensified to a Category 5 over the next two days, growing larger right up until it made landfall in Mexico Beach, Florida.

But Nestor is no Michael. For one, it developed much closer to shore than Michael so it has less time to strengthen, weather.com meteorologist Jonathan Belles explained. Michael had several days to churn over the Gulf before it made landfall. Nestor, by contrast, is expected to be over land by Saturday morning, less than 24 hours after becoming a tropical storm. Tropical storm wind gusts are possible in the central Florida Panhandle, while gusts to near hurricane force are possible to the east of where the storm makes landfall.

Winds and rain from the storm were already hitting parts of the Gulf Coast Friday. High school and college football games and other outdoor activities for Friday night and Saturday were canceled or moved in parts of the Southeast, including Alabama, Georgia and Florida, ahead of the storm. Florida A&M University in Tallahassee postponed its Saturday football game against North Carolina A&T State until Sunday.

“Based on the latest information and projections we have received regarding Tropical Storm Nestor, we feel it was necessary to ensure the safety of everyone involved,” Florida A&M Director of Athletics Dr. John Eason said in an announcement. “The safety of our student-athletes, staff and fans is paramount to any athletic contest and we must do our part to ensure their safety throughout the weather event.”

Florida State University said its main campus in Tallahassee would close from midnight to noon on Saturday, and its Panama City Campus would shut down at 4 p.m. Friday. South Carolina State University in Orangeburg, about an hour south of Columbia, moved its Saturday night homecoming game up to Saturday morning to avoid bad weather as Nestor moves across the Southeast.

Fittingly, the Greek mythological name "Nestor" can be translated as "homecoming." Plans to demolish two cranes on Friday before the storm at the site of the Hard Rock Hotel collapse in New Orleans were delayed until Saturday. The city was already receiving wind and rain from the outer bands of Nestor Friday afternoon, making the operation hazardous, Fire Chief Tim McConnell said. Saturday's weather was forecast to be much better in New Orleans.

Back in Florida, Mexico Beach Mayor Al Cathey said residents in his town, much of which was flattened by Hurricane Michael, are taking Nestor in stride. “A little over a year ago we went through the third largest storm in the history of the Gulf coast," Cathey told weather.com. "I don’t see a tropical storm getting our hair raised on our back.”

Tropical storm force winds as #Nestor makes its way closer to #Apalachicola and the Florida Panhandle. You can see the surge that the storm is blowing in. @accuweather pic.twitter.com/WAL9HHX2q3