When you see lightning, run! That’s what NOAA advises in lightning safety brochures. On Oct. 15th, however, pilot Chris Holmes had no place to go when lightning started to crackle in thunderstorms around his aircraft.

"I was flying 35,000 feet over the Gulf of Mexico near the Yucatan Peninsula when a super cell started pulsing with light," he says. "It wasn't just ordinary lightning, though. The cell was creating lots of sprites and jets leaping up from the thunderhead." At a distance of only 35 miles, he video-recorded this 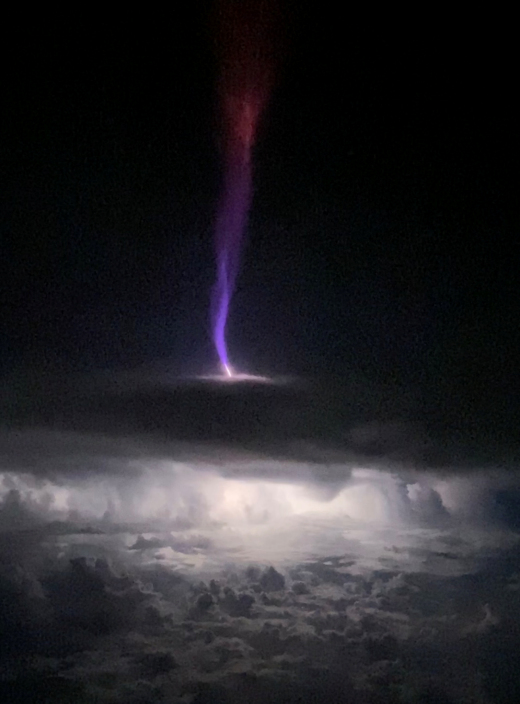 It was the most amazing thing I've seen in my aviation career," he says.

Holmes had a close encounter with a Gigantic Jet. Sometimes called "Earth’s tallest lightning," because they reach all the way to the ionosphere ~50 miles high, the towering forms were discovered near Taiwan and Puerto Rico in 2001-2002. Since then, only dozens of Gigantic Jets have been photographed. In previous images taken by cameras on the ground, it's almost always impossible to see the base of the jet over the edge of the thundercloud. That’s why Holmes’s video is special. He was filming above the storm at practically point-blank range.

"His clip shows very nicely the top of the cloud where the jet emerges, which is usually hidden from view," says Oscar van der Velde of the Lightning Research Group at the Universitat Politècnica de Catalunya who examined the footage. "I split the video into individual frames so we can see exactly what happens." 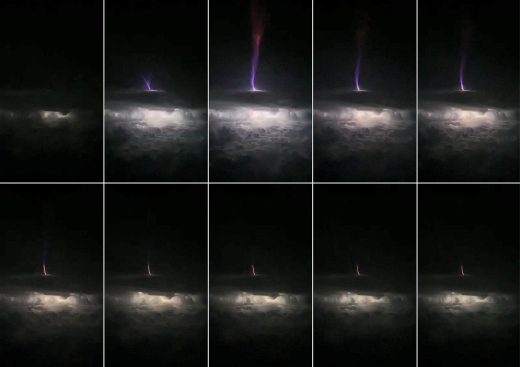 Van der Velde’s deconstruction reveals the order of events: “First, relatively cool blue filaments spring up. These are streamers akin to Saint Elmo’s Fire,” he explains. “Next, after the Jet reaches its maximum height, another feature crawls more slowly out of the cloudtop–a white-hot ‘lightning leader.'”

“This suggests that there may be a much more powerful electric configuration inside the thunderstorm than was previously thought–perhaps as much as 200 million volts," says van der Velde.
It just goes to show, we still have a lot to learn about Gigantic Jets
Bron: spaceweather.com
Terug naar boven
Bericht toevoegen
1 Gebruiker leest nu dit topic, onderverdeeld in 1 gast en 0 leden