+ 0 Tweet
Some five million people have been affected by a powerful storm that hit China's south-east coast, destroying houses and causing widespread flooding. 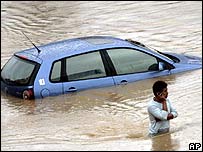 Zhejiang province was among the areas worst hit in China

More than 1.4 million people were evacuated ahead of Typhoon Krosa, which struck Zhejiang and Fujian provinces on Sunday, Xinhua news agency reported. No deaths were reported and it was later downgraded to a tropical storm.

In Vietnam, meanwhile, the toll from Typhoon Lekima, which struck last week, rose to at least 55, officials said. Hardest hit were the provinces of Thanh Hoa and Nghe An, south of the capital, Hanoi. Hundreds of thousands of homes were said to be under water, and a Red Cross official described the situation as "very acute". Several bombs from the Vietnam War era that were exposed by landslides have been defused by military engineers, local media reported.

Landslides possible
Typhoon Krosa struck Taiwan before making landfall in China on Sunday afternoon, where it was estimated to have caused more than $600m (Â£300m) worth of damage. 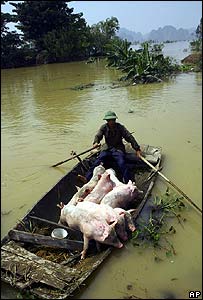 Hundreds of thousands of homes in Vietnam are under water

About 75,000 fishing vessels were recalled to port as gale-force winds and heavy rain hit the south-eastern provinces. The storm halted air, sea and road traffic and closed schools, while houses were destroyed in the port city of Wenzhou, Xinhua said. Twenty-seven sailors had to be rescued when their freighter suffered mechanical failure off Wenzhou, the agency said.

Krosa has now been downgraded to a tropical storm and is heading back out into the East China Sea, forecasters said. But officials in Fujian and Zhejiang have warned of more rain and possible landslides in the coming days. Typhoon Krosa is the 16th typhoon to hit China this year.

The BBC's Caroline Gluck in Taipei says Krosa's sprawling 300km radius ensured its strength was felt across the island. At least five people died in storm-related accidents and more than 52 people were injured. More than 1m (3ft) of rain fell in places, and wind gusts of more than 185km/h (115mph) were recorded. In Taipei, more than 200 trees were uprooted and several floods reported. Power supplies and transport services were seriously affected. Krosa is the Cambodian word for crane. 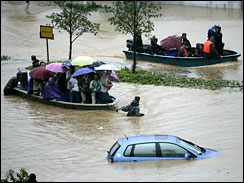 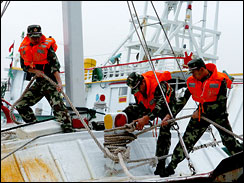