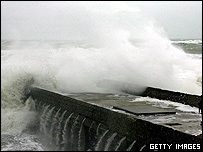 Severe flood warnings are in place on parts of the east coast of England, with the Environment Agency warning of "extreme danger to life and property".  Prime Minister Gordon Brown chaired an emergency Cobra committee meeting on Thursday, as low pressure and strong winds caused a North Sea tidal surge. Norfolk and Suffolk have eight severe flood warnings. Parts of Kent, Essex, North Yorks and Lincs are on alert. The Dartford Creek and Thames barriers were set to be closed from 2000 GMT. Residents in low-lying areas of the Suffolk coast were advised to leave their homes.

A Suffolk Police spokeswoman said: "Those most likely to be vulnerable to flooding should leave their properties and seek shelter with friends and family outside the affected area if possible." Leisure centres in Lowestoft and Leiston, as well as Beccles Public Hall, were being made available to the public. In Great Yarmouth, Norfolk, sandbags were being prepared for homes and businesses.

'Gravely concerned'
The flood alerts are a response to weather and tide patterns being tracked this week by the Environment Agency and the Met Office. Wind speeds exceeding 50mph (80km/h) are predicted, with the storm surge expected to peak at about 0430 GMT around Immingham, near Grimsby, and then at 0700 GMT on the East Anglian coast. In a brief Commons statement on Thursday afternoon, Environment Secretary Hilary Benn said: "A tidal surge of up to 3m [10ft] is making its way down the North Sea which could coincide with peak high tides. "There is a risk of flood defences being over-topped on the coast and in tidal rivers, especially in East Anglia, particularly the Norfolk Broads and the coast south of Great Yarmouth including Lowestoft, and areas south of this as far as the coast of Kent." Senior Whitehall officials convened a meeting of Cobra, the government's emergency committee, at 1600 GMT, which was then followed by the prime minister chairing a second meeting just before 1900 GMT.

The North Sea conditions were also causing problems for the authorities in the Netherlands on Thursday. Coastal flood defences were put on alert, with the harbour in Rotterdam set to be closed off by a storm surge barrier.

The Environment Agency's Simon Hughes said of the situation in eastern England: "We're watching it very closely and we're gravely concerned about the scope for some serious flooding."

BBC weather forecaster Carol Kirkwood said "particularly high tides" were exacerbating the situation. She explained: "We've had gales down the North Sea today, they'll continue for at least the next 24 hours, pushing the water down in the direction of East Anglia. "It's going to be combining with at least two tidal cycles which is what is going to cause the risk of severe flooding problems."

There are eight severe flood warnings, 10 flood warnings and 24 flood watches nationally, covering North Yorkshire, Lincolnshire, Norfolk, Suffolk, Essex and the north Kent coast. The severe warnings in place from Great Yarmouth down to Shingle Street, and on parts of the River Bure, River Yare and River Waveney, carry an Environment Agency alert stating: "Severe flooding is expected. There is extreme danger to life and property. Act now."

Localised flooding
From the north Kent coast around to Sandwich and Deal, people were being asked to keep an eye on the weather and tides. The impact there was expected to be less severe - with predicted tides 1.5m (5ft) above average - but there is still a risk of localised flooding. The Environment Agency said it had put Dover District Council on alert that any cars parked at Sandwich Quay could be damaged. Chief executive Barbara Young said: "We have already made more than 12,500 calls direct to individuals affected through our Flood Warnings Direct system. "It's also a good idea to check on elderly relatives and neighbours to see if they are OK." The Thames Barrier was last raised to regulate the tides on 20 March this year. The Environment Agency's Andy Batchelor said: "Our 24-hour control room constantly monitors weather situations further up the coast and currently the forecast levels require us to close the Thames Barrier to allow it to perform its role and prevent flooding in the capital. "This is a standard procedure for us when a tidal surge comes up the Thames combined with high flows in the river." The Environment Agency, Met Office, emergency services and council planners will be constantly assessing the tidal and storm situation in all the affected areas. Large parts of Lincolnshire, Norfolk, Suffolk, Essex and Kent were left under water in 1953, and 307 people died, when high tides and a storm saw a tidal surge of 3.2m (10ft 6in). The Environment Agency said it was "much better prepared now", but the Met Office added that it was predicting the highest tide since 1983 in Felixstowe, Suffolk.

+ 0 Tweet
A storm in the North Sea has left Britain and the Netherlands facing the worst flood threat in decades with tidal surges predicted early on Friday. Flood defences have been put on alert on the entire Dutch coast and flood warnings are in place for the eastern and northern coasts of Britain. 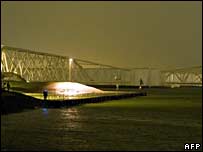 The barrier protecting Rotterdam has closed for the first time ever 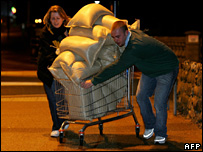 Families along the Norfolk coast have been protecting their homes 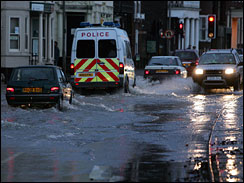 A surfer rides a wave as giant waves break over a sea wall in Gorleston-on-Sea, near Great Yarmouth as a tidal surge hits England.

A Fire Rescue vehicle makes its way through a flooded street at Walcott near Great Yarmouth as a tidal surge hits England.

Giant waves break over a sea wall in Gorleston-on-Sea near Great Yarmouth as a tidal surge hits England.

The Environment Agency is urging people to remain vigilant

Some areas are still at risk of flooding from the biggest tidal surge for half a century, the Environment Agency has warned. It is urging people to keep checking the flood situation in their area. The warning comes after thousands of residents who fled the expected devastation returned home. Fears of widespread flooding have diminished, but 11 areas in East Anglia and the north east remain on flood warning or flood watch alerts. Tides peaked without major breaches of sea defences with waters that were nearly 8in (20cm) lower than originally feared and passed without causing major damage.

Many newborn seal pups have died in the storms

Recent storms appear to have badly hit a grey seal colony on the Farne Islands off the Northumberland coast. Naturalist Simon King, who presents the BBC's Autumnwatch, said bad weather and high tides had "greatly affected" the colony - one of the largest in the UK. He said a survey was being carried out, but that it appeared a significant number of newborn seals had perished. Storms have also forced thousands of Arctic seabirds, called little auks, to the islands over the past week. Grey seals have made their home on the Farnes for the last 800 years.

Death toll
Mr King said: "The grey seals have been severely affected by the storms we have experienced over the past few days. "Early signs are pretty grave. There is no doubt the colony has been severely affected by the great surge of waves that washed over the islands a few days ago. "Each year you would expect about 1,200 pups to be born on the islands. Naturally you would expect about 50% of them would die. But this year it looks as though the death toll has been very dramatic indeed. "We have yet to get a complete picture simply because the weather has been so bad." Meanwhile more than 50,000 little auks, which are more used to the Arctic Circle, have been spotted off the Farnes. The Royal Society for the Protection of Birds (RSPB) and National Trust put the influx down to recent stormy weather. The small black and white bird is a relative of the puffin, but is only around the size of a starling and is normally found in Greenland.