Gales force winds and rain have caused chaos in parts of central, western, and southern Scotland.

The bad weather brought down trees, caused lorries to topple and left thousands of homes without power.

Westerly gusts reached 80mph overnight leading to the complete closure of the Erskine and Tay Bridges.


The storms are expected to continue

An estimated 8,000 homes are without power in Argyll and 800 are affected in Tayside. Engineers are unable to carry out reports until the wind dies down.

A spokesman for Scottish Hydro Electric said the firm was trying to reintroduce power remotely where possible.

Around 20,000 homes were without power today after Scotland was battered by gale-force winds and rain.

Gusts reached 70mph overnight and were expected to reach up to 90mph in southern, western and central areas today. The Met Office said the highest gusts, over Glen Ogle in the Highlands, topped 100mph.

Police said numerous roads had been blocked by fallen trees and some routes were affected by flooding. Thousands of homes in Argyll, Lanarkshire, Ayrshire and Clyde were without power.

Energy companies said that they were doing all they could to restore power, but continuing high winds were causing problems for their engineers.

Strathclyde Police said the high overnight winds had blown off part of the roof of the derelict Great Eastern Hotel in Glasgowâ€™s Duke Street. Surrounding roads were closed and nearby residents were urged to stay away from their windows.

The Erskine Bridge and Tay Road Bridge were closed and the Forth Road Bridge was restricted to cars only.
On the M74 at Abington, the main West Coast route between England and Scotland, five lorries had overturned, blocking the carriageway and causing lengthy tailbacks. Speed limits of 30mph were in force. 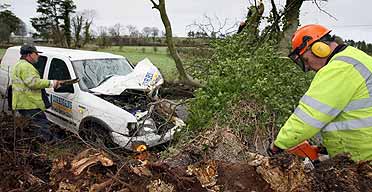 A driver had a lucky escape in Broughshane, County Antrim when a tree fell on his vehicle as high winds swept across Northern Ireland. Photograph: Paul Faith/PA

Roads have been blocked by falling trees, ferries cancelled and thousands of people left without power as winds of almost 80mph buffeted Scotland and Northern Ireland today. High winds also caused cross-Channel ferries to be delayed by up to 90 minutes, while firefighters in Lincolnshire dealt with a mini-whirlwind. The strongest gusts of 78mph hit the Isle of Islay in western Scotland, causing ferry services between Belfast and Stranraer to be cancelled. Only cars were allowed to cross the Forth road bridge while the Tay and Erskine bridges were completely closed.

The M74 motorway was blocked when four lorries overturned at Abington in South Lanarkshire and about 14,000 homes in Argyll, Lanarkshire, Ayrshire and Clyde were without power after high winds damaged cables.

The Met Office said the winds could strengthen today in parts of Scotland and issued a severe weather warning that gales of up to 80mph could cause structural damage.

A spokeswoman for Fife police said: "Numerous trees have been blown down, blocking the roads, and we have had some minor flooding across the region.

"But it has not been a disaster, it has just been a bad winter night due to high winds and sweeping rain."

Police in Northern Ireland closed a road in Lisburn, County Antrim, after power cables were brought down and they banned all traffic on the Foyle Bridge in Londonderry. Heavy seas in the English Channel caused delays to ferry services. Sailings from Dover's eastern docks with P&O Ferries were running about 90 minutes late. Firefighters in East Yorkshire and North Lincolnshire said they dealt with a number of incidents, including a "mini-whirlwind" in Scunthorpe last night which moved a metal storage building. There were no injuries. The most serious incident was a minibus crash yesterday near Garrowby Hill in East Yorkshire which left two people in hospital. Firefighters believe the bus could have hit black ice on the road.


A huge wave crashes against the promenade of the British city of Blackpool, as severe gales sweep the north of the country.